When Cecil, a magnificent twelve year old male lion, was killed by Walter Palmer, a dentist from Minnesota, the world took note. Finally, a cowardly act so outrageous in its cruelty gave rise to an outcry from thousands. Perhaps now, in the anger and grief, attention will be focused on the barbaric slaughter of the animals of the wilds of Africa. One person who has taken up the cause in a persuasive and powerfully eloquent manner is Mary Baures. A psychologist, Baures pours her clinical knowledge and compassionate nature into her book, Love Heals Baby Elephants: Rebirthing Ivory Orphans. Her depiction of the plight of the elephants and rhinoceros is impassioned, poetic, poignant and compelling. She describes Cecil’s death in a manner worth repeating to keep the horror of Palmer’s cruelty well in mind.

His (Palmer’s) Zimbabwe guides tied a dead animal to the back of their vehicle and lured Cecil, a beautiful, black maned lion with twelve cubs to protect, out of a safe area in Hwange National Park. They chose him because he was massive, a warrior with big black chunks of dreadlocks. They shined a spotlight on Cecil to blind him, then Palmer shot him with a bow and arrow. Cecil was injured from the first shot but escaped and fought to live forty-four hours while the crew tracked him and killed him. The team . . . tried to destroy the GPS tracking collar, probably visible when they led him out of the park and into the spotlights before the kill. Palmer butchered an Oxford University research subject ….

To drive her point home that Palmer is typical of the sport hunters who are the scourge of the savannas that are home to the beasts of the wild, Baures at one point observes. “Palmer’s treatment of his victims mirrors those of serial killer Jeffrey Dahmer.”

Baures also mentions Jimmy John Liatuad whose obscene pictures depicting him standing two-thumbs up on his kills, including an elephant and a rhino, should inspire a boycott of his Jimmy Johns restaurant chain. Liatuad is a coward, a bully and a mindless killer.

Baures’ plea is all the more powerful because she brings her trained eye to her subjects. She cites examples of creatures working out of a sense of compassion for one another. Baboons, in one situation, drop mangoes from the tree tops to an orphaned baby elephant so that it can survive. In another, a hyena protects an orphan baby elephant from attack by a pack of her own kind. Her descriptions of the nurturing and rebirthing of the tiny orphans is especially moving. The newborn of the elephants, like humans, take much longer to reach maturity than other mammals. The horror of seeing the mothers slaughtered in front of their eyes is traumatizing, just as it would be for a human child. They need to recover physically and psychologically. Most, tragically, do not. Only about one-third of the orphans are ever rescued. Some die after rescue because of the severity of their injuries and the shock of seeing their mothers butchered. Those who do recover must learn to trust again, most of all the humans, representatives from the same species that killed their mothers. The miracle is that the tiny creatures, with the support, nurturance, and affection of the rest of rescued herd, eventually learn to accept others again, find a home and learn to play among the their new found friends. Eventually, and probably with greater discernment than most humans, they find a way to accept the attention and love of their human keepers.

We have stepped outside of nature . . .

Men are capable of outrageous cruelty toward their fellow beings because we have stepped outside of nature. The author quotes Albert Einstein observation that the task for humans “is to widen ‘our circle of compassion to embrace all living creatures and the whole of nature.’” The enormity of our crimes against our fellow beings is staggering. “Fifty years ago,” the author reports, “there were 450,000 lions. Now (2105) there are only 23,000.” At one time, three million elephants roamed the African savannas. Their number has been reduced to 30,000. Yet the slaughter continues. 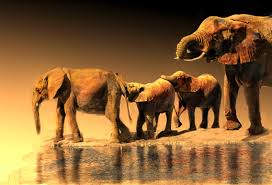 The ivory trade funds organized crime who attack with helicopters, off-road vehicles, rocket launchers and rapid-fire semi-automatic weapons. To prevent detection, they use gun silencers and sedation to capture their prey who they butcher in the field and leave the caucuses to rot, often with their babies clinging by the remains, vulnerable and alone. Baures supports her statements with facts. She writes, “The illegal wildlife trade is the world’s fourth largest criminal activity, with annual profits of $20 billion.” She reports that 1,200 rangers from thirty-six countries have been killed in the line of duty. Rangers are charged with the task of protecting the wildlife in their area.

Baures’ reporting is balanced. She justifiably rails against the cruelty, insensitivity and horror of the hunting and harvesting body parts. She balances her righteous condemnation with insight into the wonder and awe of the creatures she observes. Elephants have brains four times as large as human brains. Their capacity for memory is not a myth. They exhibit psychic abilities far beyond those known to most humans. They have an inspiring capacity for love, compassion and sharing affection. One event report was especially moving:

When Lawrence Anthony, the elephant whisperer, died in March 2012, thirty-one elephants from two herds arrived after traveling 112 miles. The marched in a solemn line for hours to pay their respects. . . . They were led by Nana, the matriarch, and had not been to his (Lawrence’s’) reserve at Thula for a year and a half. They continued their grief vigil for two days before heading back to the bush. Their knowledge of his passing speaks of the mystical knowing of elephants. (Reviewer’s note: Nobody told the elephants of Lawrence’s death.)

“They are loving,” Baures writes, “wise and peaceful. Perhaps the telepathic abilities of elephants come from their rootedness in the Earth and their collective sense of self.”

“Unlike us,” the author observes in a later passage, “they don’t conceive of themselves as separate from other creatures or from the vast universal mind. Love melts away the boundaries between self and other creatures and may explain elephants’ extraordinary knowing.”

“You are our last innocence,” Baures writes.

A young elephant, probably an orphan. Look at the eyes of this intelligent animal.

Readers are urged to buy the print versions of Love Heals Baby Elephants because of the many wonderful pictures included in the text. This reviewer found the Kindle format too confining and lacking in detail when viewing the photos. The book has a casually rushed feel to it which is completely understandable. Given the Palmer horror, the time was at hand to get the word out. The flow of the book is almost conversational. Also, the title is a bit misleading because the book is not confined to discussing only elephants. Wait until you read about the ostriches Pea and Pod and the great fun they have playing among the behemoths of wild. The plight of the rhinoceros also falls within the author’s concern. Black rhinos have been driven to near extinction in malicious harvesting of their horns in the false belief that powder made from them is an aphrodisiac. (The horns consist of tissue much like fingernails, with no food or  medicinal value.) Ms. Baures has a straightforward, easy to read literary style. While her subject at times becomes somewhat technical, her explanations are in the language of a layperson and easy to follow. Her poetic nature shines in passages, some planted like gems and set out as pleasant, insightful surprises for the reader.

Years ago, Rachel Carlson wrote Silent Spring which became a bestseller. Mary Baures deserves that same recognition for the power of her compassionate message. Hopefully she will be as instrumental in forcing a long overdue change and that as humans everywhere we grow in our awareness that we are sharing our Earth with our fellow creatures. They deserve our respect and compassion. We diminish ourselves every time we forget our relationship with them.

Thanks for visiting my website. While you are here, I invite you to look through the other pages and posts. Your comments are also welcome. Please use the area below.