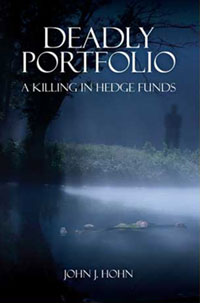 All Financial Adviser Morrie Clay wants is to make a killing in hedge funds for his client and earn a huge commission for himself. A few keystrokes on his computer and he pockets thousands without his client ever realizing that anything is amiss. It’s too easy. Morrie crosses the line and, without his client’s approval, invests nearly $750,000 in a high-risk fund. He has no way of knowing that his actions would set in motion a chain of events that would end with murder.

Morrie’s plan to hide the illegal trades fails when the client announces that he is moving his accounts to a  competing firm. A required audit will report the trades, and the disclosure will end Morrie’s career. He has the four days of the Fourth of July weekend to cover his tracks and avoid being charged with a felony and financial ruin.

Detective James Raker investigates when Rene McAllister’s body washes up on the beach on Sunday of the long weekend. Raker initially concedes that the cause of Rene’s death is accidental drowning but changes his mind when finds that four people had both motive and opportunity to kill her. When a second body turns up days later, the detective is convinced that a killer is loose.

The neighborhood he had come to know so well over the past few days was in chaos. Two people were dead. The residences may have appeared to be serene and bucolic, but in the deep, cool shadows of the elms and maples, the hypnotic lapping of the waves, pain and terror dropped out of the breeze from the bay. In all his years of police work, he had never grown accustomed to the chill of the murder scene.

The unauthorized trading is reported and Raker finds himself racing to prevent the killer from striking again.

Read an Excerpt from Deadly Portfolio

What reviewers are writing about Deadly Portfolio: A Killing in Hedge Funds

. . . keeps the reader glued to the pages. The character development is superb and the story line holds the reader’s attention to the bitter end. Connie Harris –TCM Reviews

Deadly Portfolio is a thriller that’ll be hard to put down. –Diane Donovan, Midwest Book Review

Hohn’s final twist takes his book beyond a great murder mystery/police procedural and into a fascinating fable! You won’t want to miss this one! —Glenda A. Bixler, Book Haven.com

I like this author’s writing style and he knows his stuff. The story keeps you gripped, and you do not want to put it down once. –Barbara Hightower, BabsBookReviews.com

John J. Hohn has put together a contemporary, suspenseful story. . . . The characters of the story are engrossing as are their motives and changing loyalties. –Michael A. Draper

This mystery is great! Incorporating a variety of people, and families, intertwined into one mystery . . . . the reader finds that everything is not what it seems….. –Ami Blackwelder, the author of The Hunted of 2060, Hot Gossip Hot Reviews

Deadly Portfolio is a well written, intriguing mystery guaranteed to entertain. It provides study of the impact of acquisition of wealth of those who compromise their values. –Enid Grabiner, RebeccasReads.com