This is the fourth installment on a series that I have offered on my family’s experience living in Detroit during the mid-1960’s, a period of violent social unrest and the battle over Civil Rights. Readers are urged to read the previous post(s) before wading into this one.

I did not feel that I was taking any particular risk when I drove down to the office on Tuesday morning, July 27, 1967. News coverage continued reporting on the riot throughout the night, but my wife and I started the day with the expectation that order would be shortly restored and the city would return back to normal.

Looking back today at the pictures of the riot area, (pictures)  the destruction and the faces of all those who were caught in the middle of it, I realize that as a young white couple, my wife and I lived a lot more than three miles from the danger and the riot. We lived in a world apart. We knew nothing of life in the city. The 18 months we spent in lily white south Minneapolis was on the fringe of the wealthy neighborhood near Lake Harriet. We could walk two blocks to the beach in our swimsuits and flip-flops with our towels hung around our necks. We never sensed fear.

Furthermore, we never thought for one moment that Detroit would be our home. I had a college degree. I had a career. Detroit was just a stop on the way. The corporate ladder stretched upwards for me, and I was confident that in time I could ascend so that I could make wonderful things happen for my family. We were going to be affluent and comfortable. We would find a city that we wanted to call home—in a safe, affluent neighborhood with good schools and parks. That would be the payoff. I didn’t realize it then, but what separated us from the people caught up in the violence, killing and arson was not so much race or the color of our skins. What separated us was hope. Hope for a better life. We were confident that, regardless of the hardships we might endure along the way, the world would ultimately be ours to shape as we pleased. That would be our reward for persisting, for doing what we were taught—working hard, telling the truth, loving our family, and being kind to others. Even if we failed, we knew the opportunity was ours to pursue.

Those who were in the riot areas, who watched their businesses, their homes and possessions, and their autos burn through the night, harbored no such expectations. The most responsible members of that inner city community were living in poverty that was generations deep. The schools were separate and inferior to those outside the inner city. Children didn’t venture into the parks because parks belonged to the drug dealers and gangs. Residents feared the police because an encounter with the law might mean a beating.

Some analysts wrote that the riot was an expression of impatience. Things had been getting better, some wrote, and the citizens of the inner city had grown to expect more—more and better jobs, better schools, and better police protection. They—the federal government, the city administration, the state—had failed to deliver the last 10 percent of what people were expecting. Expectations turned to disappointment, disappointment to anger and anger to desperation. That kind of commentary was well received by the whites.

“There, you see?” white neighbors were telling one another in the safety of their own backyards, “You can’t do enough. Those people are burning down black businesses right along with white stores.” In the minds of some, any efforts to improve the lot of the African-Americans in the inner city had been doomed to fail all along. The riots became a serious setback for liberal causes and for the African-American members of the community because the violence gave the bigots so much more to condemn. Analysts did not know of how much had been done or left undone because there was no way on earth that the effort could be measured. Dollars might be counted. Jobs might be posted, but the essentially black inner city living experience was not even close to parity with the white way of life in the better parts of the city. 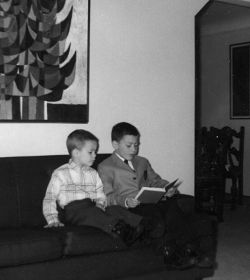 My sons Eric and Jim in the front room of our Detroit home.

As members of the white community, we took our freedoms for granted. Upward mobility was a reality. In the 1960’s, we knew that we would be preferred over colored applicants for jobs, that we would be treated courteously by police and that we could attend school conferences and speak up about grievances and have them addressed. Jobs were the issue, of course. Schools were the issue also. But at the core, the white population had no idea of what life as a minority in the inner city was like. Whites had never lived under the same conditions, with the same limitations and deprivations. Few whites ever lived in a society that condoned prejudicial treatment of them. The last ten percent of the dollars may not have been spent, but 90% percent of the compassion, concern, understanding and goodwill had been withheld. The absence of a few more dollars did not cause the riot. The indifference, hostility, prejudice, ignorance and guilt on the part of the white community did. It was the desperation of not being considered as a fellow human that fueled the flames.

“They should leave just the way it is,” white people said. “They burned it. They can live in it.”

I would like to write that my wife and I understood what was going on and the causes of it. We didn’t. Nothing in our experience prepared us for what was happening within ear shot. Standing on my front porch, I could hear the gunfire from 50 caliber machine guns as if war had broken out down town. When reports circulated that snipers were active and people were being picked out indiscriminately as targets, we pulled the shades at the front of the house and kept the lights out so that none of us would be silhouetted at night in the windows.

Newscasters (video time line) announced that President Johnson had ordered troops from the 82nd and 101st Airborne into the city, and they were deployed to the east side early Tuesday morning. The west side, where the rioting began on Sunday, was still assigned to the National Guard which was placed under Army command. Bringing more troops into the city caused the rioting, arson and looting to escalate initially.

Telephone service was restored late Tuesday. My manager called to say that we would reopen on Thursday, pending any further serious developments. Anyone who failed to report on Thursday was to be listed as an excused absence. At this time, I was responsible for the department that kept the records for automobile insurance policies issued by The Travelers in southeastern Michigan. The department had fallen behind in the issuance of new policies, renewals, amending existing contracts for changes in coverage and verifying coverage for claims processing. The early 1960’s, after all, had been boom years for Detroit. People were trading cars more frequently than ever. When service fell behind, policy holders and agents complained because nobody was sure coverage was in force and in effect to secure loans and meet licensing requirements. My days were spent on the telephone fielding complaints and intervening whenever possible to resolve problems. I knew that the time lost with the office closed because of the riot would be very difficult to recover. If anything, the volume of claims would certainly increase.

The auto insurance department employed approximately 50 people. In 1966, nothing had been computerized. Handwritten applications for insurance were submitted by the agents, and once accepted by the underwriters, the premium was calculated using manual Monroe hand-cranked calculators, contracts coded and sent to typists for completion. Typist prepared stencils that were then passed on to the mimeograph operator who replicated copies for the policy owner, the agent, and an 8 X 5 card for the company records. The process was painfully slow. At the worst, renewals were being issued more than two months late. New policies could take up to a month to deliver.

The worst outcome of the riot that I faced as young executive was months of more stress trying to respond to a  high volume work flow with less than a full staff to handle it. I still had a good job. I still had a comfortable home. My children were safe. I still had the same future that I had the previous week. Wednesday would be another day away from the office. Eleven people died from gunfire during the day on Tuesday. The Airborne marched in formation down the streets of the east side and took over the school building where the National Guard had established their headquarters in the dark for fear of snipers. The command given was that the lights be turned on, and shortly thereafter the streets on the east side became quiet. Rioting continued, however, on the west side. It would be two more days before the killing and the burning stopped.

Please feel free to comment in the area provided below. Also, I invite you to browse through the pages of my web site and consider the reviews of my novel, Deadly Portfolio: A Killing in Hedge Funds. Thank you.