This is the second and final part to a article posted earlier entitled “Atheist Libertarian Golf Addict Befriends Agnostic Liberal on Golf Course.’’ Readers who have not read the previous post, are urged to do so before tackling the conclusion presented here.

Harry was troubled that our society was destined to break down. The masses would surge out of the cities and ravage the countryside looking for food, shelter, and clothing.

“Gold is the only thing that will hold value when the currency collapses,” Harry argued.

“I’ve never trusted the way gold is held in custody. If you take possession of it then it can be stolen,” I said. “Besides, I don’t believe that the currency is going to collapse. If we have hard times, we’ll find a way to get by.”

“Well, I couldn’t hunt,” Harry replied. “I don’t think that I could kill anything.” He looked at me for my reaction. Harry had been in the military.

“I know,” I said. “I don’t think I could either. You develop a reverence for life if you live long enough.”

“No mob, without training or leadership, would stand a chance against the military might of this country. That’s what’s so stupid about the argument that citizens should own guns to protect themselves from the government.”

“The army will be part of the mob,” Harry countered.

“Then nobody’d have a prayer.”

“I know. They won’t have a prayer anyway, and I don’t care about prayer. I don’t believe in it. I’m an atheist.” Harry said.

“You can’t prove beyond any doubt that a Supreme Being does not exist. If you could, then you’d be an atheist. But you can’t. You’re an agnostic. Like me. We don’t know.”

“OK.” Harry surprised me with a concession.

“I don’t accept the God as envisioned by any religion on earth. If One exists, it is nothing like what man has created so far,” I offered.

“For me, God is the universe.”

“I can find myself in nature.”

“No. Too big. I can find myself in nature. See it. Feel it.” Harry had the last word

When Melinda and I returned to Southport for the winter months, Harry and I would exchange emails every day, sometimes arguing, sometimes just passing along the news. I was always worried something would happen to Harry when I was not in residence in Ashe County. Harry was eleven years older than I. 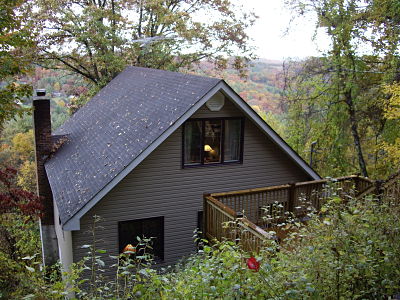 The Hohn cabin in Ashe County. The entry was two-and-a-half flights steps below the road, Not too bad going down.

Last winter, however, Melinda and I went back to West Jefferson in December to check out a house that Melinda had found for sale. We had discussed moving into a home that provided everything on one level and did not involve climbing stairs. We had owned our cabin since 1991. “You folks are young,” the real estate agent said when we first looked at the place and the two-and-a-half flights of stairs we needed to descend to inspect it. “You’ll take this right in stride.”

We did take it in stride—for 21 years. We were no longer young. I let Harry know that we were coming up to look at the residence we were considering. It was vacant. Harry agreed to meet us there. “I like this quirky little house,” Harry said as soon as he stepped into the front room. “Look at how the sunlight pours right in here.” We walked from room to room together. The master bedroom was finished off, ceiling included, in knotty pine. “I like natural wood,” Harry volunteered. The real estate agent was beaming.

“You won’t bid against us, will you, Harry?” Melinda teased.

“No, but this is a good house. It’s a great house. I like it.” The real estate lady kept beaming—if anything, more broadly than before. “Needs a little fixing up but that’s it. Take those stairs out. Put in a spiral staircase. I can show you how. I did it at my place. That would clear the congestion in the hallway.” Harry was improvising the remodeling plans just by glancing around. 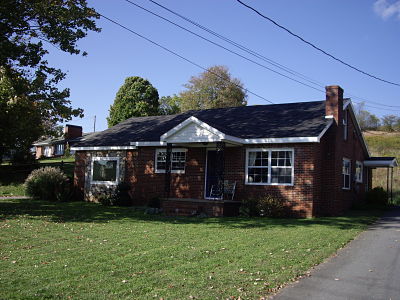 Our new summer home where Melinda and Harry awaited my arrival in the rental truck.

We made an offer and it was accepted. We set April as the date to move in and emailed Harry to ask whether he knew any young guy who could give me an afternoon to help unload furniture. Harry may have looked around, but later emailed that he could not find anyone who could break way during the day to give me a hand.

My stepson, Matt, who is 35, works out and a strapping guy of at least six feet, helped me load the rental truck. Most of the furnishings came from family surplus or items we could not use since giving up our Winston-Salem residence. The load included two large bureaus, a hide-a-bed, a double bed, a monster old TV and various smaller items.  My dog Jessie and I drove to West Jefferson in the truck. Harry came in from his place in the country and met Melinda at our new house. They were waiting for me when I drove up.

“I can’t believe you two guys unloaded that truck,” Matt exclaimed when he heard about the delivery end of the move. But Harry and I handled it—an 84 year old and a 73 year old. Harry showed me on the golf course that getting older was nothing to fear. He also showed me as we hoisted heavy furniture off the truck, over the threshold, and found a designated place for it in the house.

Harry’s strength did not hold out, however, as the summer progressed. Back on the golf course, Joe and I could tell that he was slowing down. We did not know why. He didn’t know why either. He hadn’t had a physical exam in over ten years. He called one Saturday to ask me to help him load some things onto his pickup truck at the rental house that he owned in town. He had been to see the doctor. 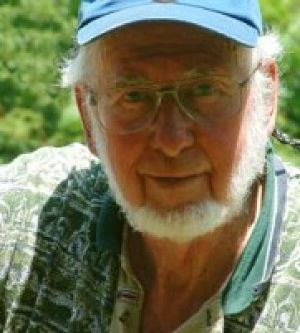 Harry Beard, a kind, good man, my  friend. my once and future golf partner. “Your away, Harry. Your shot.”

“I haven’t got much time,” he said looking me in the eye. “I’ve got pancreatic cancer. I checked it out on the Internet. There’s only one guy in the country that has had any kind of success in treating it. He’s up in New York. I don’t know what I’ll do. I see these guys hang on with chemo, go through hell with all that crap, and die anyway. That’s not for me, but I could chicken out.”

“I will support you in whatever you decide,” I said, a statement that I learned from a good friend who saw me through a tortuous time in my life. Harry seemed relieved and smiled.

As it turned out, Harry played just one more round of golf. A couple of weeks passed, and I heard that he had been taken to Wilkesboro for attention because he was so weak. His stepdaughter, Kim Hadley, called to tell me that he was rushed to the hospital because the oxygen content in his blood was so low.

I had to see him. I drove the 30 miles to Wilkesboro. He smiled broadly when I entered the room. I stood at his bed side. He seemed older than ever and very tired. He looked directly into my eyes. His pupils, bright as onyx beads in the middle of his milky blue iris of each eye, focused intently on me. Neither he nor I wanted to make any more of the moment than that we were together. I reached down and clutched his frail shoulder. “We have been such good friends,” I said.

“You won the last hole we played together.”

“I did, didn’t I.” He smiled. “I need to get some food down and keep it down. I need to drink some water, and maybe in a few weeks, I’ll get my strength back.”

“I hope so,” I said. He clasped my hand to signal that our visit was over and relaxed into his pillow. I turned to leave the room.

As I reached the door, he said “Love you, John.”

I looked back. He was staring at the ceiling. “I love you too, Harry.”

I know that men don’t say that to one another. I only told him once. He only told me once. And it was the last thing either of us said to the other. It was, of course, that we had been as boys again together. No worries. No tomorrows. Just in the moment, right now, and the fun we could have in each other’s company.