I hope that there is life after death because then I can play a few more rounds of golf with my friend Harry. That assumes, of course, that there will be golf in heaven (or whatever it is to be called) and that Harry will be there. If Harry is not in heaven, then I don’t want to go there either. I want no part of any place that would not admit him. Harry died last July. Golf, and to a measurable degree, my life have not been the same since.

Harry and I met on the driving range at Mountain Aire Golf Club which is just outside of West Jefferson, NC. (West Jefferson, by the way, is just west of Jefferson, NC.) I was trying to fix my high short fade when I noticed this other older guy crushing drives out 200 yards a crack. “Man you get a lot of distance with a short back swing,” I said in hopes of starting a conversation.

“Yeah. Well. That’s today.” Harry looked up and smiled. “Harry Beard,” he said introducing himself and stroked his closely trimmed white beard to make the point.

Harry was as tall as I—both of us topping out an inch or so over six feet. I don’t remember what else we may have discussed. I don’t even remember when we met, sometime in 1995, maybe, but it doesn’t matter because our times together over the years have become a blended memory. The laughter, the chiding, and the serious moments pile up like coins in a jar until there’s no point in counting them any more. 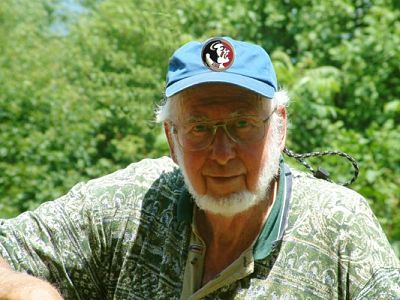 Harry Beard, 2011. An ardent Gator fan, his stepdaughter with a little help from Photoshop put the Seminole emblem on his cap as joke.

We may have played our first round together on the day that we met. Again, I don’t recall. Somewhere along the way, we decided to play every Sunday.  Fred Racey and Marty Kernis rounded out our foursome on Sundays. When Marty eventually withdrew and Fred moved away, Joe Culbreath and Dink Harmon took their places. Once I started retirement, Joe, Harry and I also played every Thursday.

Harry was trained as an engineer. He was first to design, program and install an inventory control program for a now defunct major international airline. Corporate life must not have agreed with him, however. He talked about his times as an orange grove owner, an apartment house owner and manager, a pilot, a Christmas tree farmer, and a pizza parlor manager. Harry could sit down to a game of hearts and walk away the winner every time. By the time the third trick was taken, he’d have a pretty good idea of where every card in the deck was being held around the table.

Harry and I were walking on the 10th fairway when Harry, almost sheepishly, told me about his prior marriages. “Hell, I’m in my third marriage,” I replied. “Melinda and I have been married for fifteen years, and I am pretty sure this one’s good for the duration.”

“I’m sure mine is too,” Harry agreed. He laughed when I told him that my first and second marriages ended in divorce. I think he was pleased that I had strayed from the conventional crowd and bruised my shins along the way also. 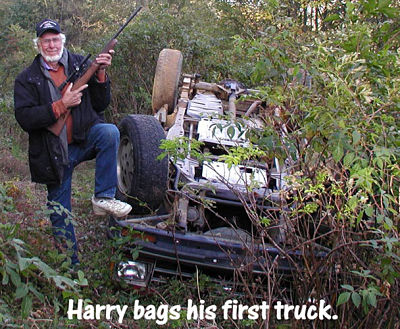 Harry, 2003, when his pick up rolled over on the road into his place.

Harry loved animals, especially his dogs. On a quiet day at Mountain Aire, the dogs would run along with us.  When one or the other tired, Harry would drop it off at his pickup when we made the turn after nine holes. The last two dogs who ran with us, Bogey and Sunny, never really obeyed Harry when called to them. Perhaps it didn’t matter when one or the other ran off because Harry was confident that it would eventually return. When one didn’t, we broke off from our game and went to look for it.

One day, Bogey jumped into the cart I was driving and sat down beside me on the seat. I put my arm around him as we rode to the next tee, and he gave me a big sloppy kiss on the face.

“He kissed you,” Harry exclaimed when we got to the tee. It was either incredulity or jealously I heard ringing in his voice.

Once Harry entered retirement, he lived like a survivalist. His home was situated on several acres deep in the wooded mountain side of Ashe County, North Carolina. There he kept a horse, until a bear frightened it off, two mules that wandered away for a several weeks—so long that Harry had given up on them, a goat that kept eating the Merrill Lynch golf umbrellas that I gave him, peacocks, chickens, several cats, and of course, Sunny and Bogey. “We are like them, you know, the animals,” he observed one day. Harry and I tried to accept life as we found it, and recognizing man’s fellowship with other mammals was one more awareness that we shared.

Harry split his own firewood and heated his home with a wood stove. “Some days, I couldn’t get the temperature up more than about 50 degrees,” he would say of the bitterly cold Blue Ridge winter days. 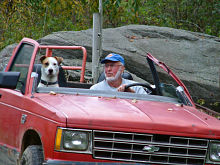 Harry and his beloved Bogey. That’s right, Harry cut the top off of his pickup and kept using it on his farm.

He built a pond and stocked it with fish. On the highest peak of his land, he erected a flag pole and had Old Glory streaming in the stiff mountain winds every day. “Sometimes,” he noted, “planes will fly so low over this peak that I can see the pilot. I always wave.”

He gathered maple sap and made his own maple syrup each spring. He gardened and canned or froze his own produce. When he pulled into the parking lot at Mountain Aire on a Sunday morning, Joe, Dink and I would meet at Harry’s vehicle where he would hand out fresh eggs, sweet corn, beans, tomatoes, squash, and other surplus from his garden. Harry was also an excellent cook.

Harry despaired of government. “I’m a Libertarian,” he proclaimed. “Actually, I think I’m an anarchist, but those bastards usually end up killing people, and I would never do that.” Harry was never concerned about consistency in his beliefs. As an avowed anarchist, to illustrate, Harry was always the first to invoke and insist on the rules when we played.

“Everyone should have the right to starve,” was a slogan Harry coined and was fond of repeating. For years, it was a banner statement on his emails. He was against any form of welfare. One day, while we were riding in the cart together, I started to munch on a sandwich that I had prepared. “You shouldn’t bring anything,” Harry scolded eying my sandwich, “unless you bring enough for everyone.”

“Everyone has the right to starve,” I replied.

Harry admired Ayn Rand and alluded to her works frequently. “Unbridled, free enterprise driven by the profit motive does  not work,” I’d protest to his delight. “History proves that again and again.  A very few benefit and most end up exploited and deprived.” 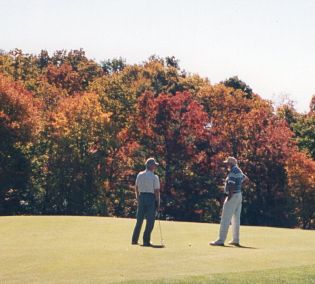 Fred Racey and Harry Beard on the number 5 green at Mountain Aire, Fall, 1996.

“They,” meaning those who espoused Ayn Rand’s theories, “have never been able to account for that, for human greed,” Harry reluctantly admitted, sounding as if he believed a solution would turn up at some future date.

Harry was fiercely competitive. We played for a quarter a hole in golf and a quarter for the longest drive. We had, in fact, probably the most complicated scoring system ever devised for a round of 18 holes. Even though he was 11 years my senior, he out drove me frequently. We would have a putting contest on the practice green for a buck. He’d call and suggest that we drive out to the course and practice our approach shots. That always turned into a game as well. “Bet you can’t get closer than that to the pin,” he’d challenge.

Harry had a lot of trouble with his eyes. One day, he needed to go to Lenoir, about 45 minutes away, for an outpatient operation on one eye, and I volunteered to drive him because he would need a chauffeur after the procedure. The surgeon wanted to meet with Harry after the operation but seemed reluctant to begin when I entered the room also. “It’s all right,” Harry assured the doctor. “He’s my younger brother. Mother always liked me best.”

One day Harry asked whether I was prepared for the collapse of law and order in the United States. I responded that my homes were paid for, that I had no debts, and that I knew how to garden, fish, and hunt.

“Good.” Harry said. “Do you have any gold stashed away, gold coins especially? You’ve got to have some, because this is coming.”

Please take the time to look through the pages of my web site. I also invite your comments in the area provided below. My book is available.