Thomas Jefferson’s Enlightenment James C. Thompson is published by Commonwealth Book Publishers of Virginia which was founded by the author in 2009. According to their press announcement Commonwealth “publishes three-dimensional stories about ideas—where history, philosophy and art meet.” The book succeeds on all on all three counts­, but the achievement is virtually negated because of the author’s failure to follow the most rudimentary rules of composition and punctuation.

(A disclaimer on the title page of the paperback version reads, “The ‘illustrated edition’ provides and overview of the author’s book length narrative of Jefferson’s experience in France.” PLEASE NOTE: This review is based only on the paperback version. The reviewer has not seen the hardcover version.)

Thompson is an audacious historian. He has his readers listening in on conversations among the most enlightened minds of the late 18th century of France who are in awe of America becoming an independent democracy. France at the time was moving toward its own bloody revolution. But France has no heritage of common law that respects the rights of man regardless of station in life. Order in France has been maintained by the feudal system that is falling apart. The poor are moving into the cities where many of them remain literate. The monarchy is bankrupt. Citizens are listening to the rhetoric that calls for a new order. The burning question for the French intellectuals, however, is whether the people are capable of governing themselves.

“France has twenty-four millions of people, Monsieur,” Mademoiselle de Grouchy interjects (directs at Jefferson – parenthesis and punctuation mine). “The great majority of them can neither read nor write nor deliberate.” (Punctuation mine).

The book presents Jefferson the man and the thinker, often dispelling popular notions about the man. Jefferson disclaims any understanding of the Law of Nature. For example he cites Samuel Adams as the man responsible for the allusion to it in the Declaration of Independence. “It was a political statement,” Jefferson insists squelching the notion that the Declaration is a philosophical treatise. At another point, he makes a startling distinction in his own thought. “Freedom has less to do with democracy, than with the rule of law! This was the understanding that guided America’s patriots at the time of our revolution.”

Author Thompson does not allow his narrative to bog down in footnotes or tedious philosophical speculation. He reports Jefferson’s days in Paris almost as if he was peering into his subject’s diary. Upon first glance, the paperback illustrated version of the book reminds the reader of a middle school history. With the heft of a magazine, its pages are broken up into blocks of print often highlighted by various background colors, font sizes, and other graphics. Page layout approaches being too busy. Art work is reproduced abundantly with portraits of all the principals mentioned in the text and views of the various settings. 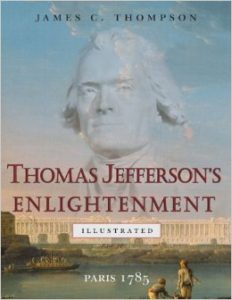 Thompson, for all his research and ease with the language, refuses to follow any of the conventions regarding punctuating dialogue and paragraph structure. Quotation marks are not used designate spoken dialogue from the author’s narrative. Quotes of several characters are dumped into single on-running paragraphs that require the reader to stay poised to recognize when a change occurs in speakers. Compounding the confusion, the author fails to put the unexpressed thoughts of a character in italics. The entire mishmash has the reader backing up repeatedly to keep track. Words are run together. Gratuitous hyphens are all over the pages. It is as if the author has prepared a gourmet meal of several exquisite dishes, but before setting the repast in front of his guests, he dumps everything into a blender and serves up a puddle of glop.

What is so tragic about all of the mechanical, and to a lesser degree aesthetic, failures of the book, is that Thompson writes beautifully. Sentence after sentence, he is powerful. He has a wonderful command of the language. He is a great story teller with a novelist’s eye for the essential details. He sets the scene. The historical characters come alive. Jefferson is depicted with sensitivity and compassion as moves among the elite of Parisian society. Thompson presents a vivid picture of France at the dawn of the revolution with the grandeur of its architecture and gardens along with the stench of Paris teeming with poor who constitute 90 percent of the 600,000 residents.

Many of the issues of the enlightenment period in Europe are still very much alive and with us today. Looking to break from the autocracy of the Church and move man away from moral dictates based upon belief, the philosophers and intellectuals of the era seek to redefine mankind’s view of itself and a morality based upon reason and a better understanding of the common good. Author Thompson’s presentation of the ideas of the great men and women of the age is clear and engaging. Had the author employed an editor to help with punctuation and paragraph structure, his book would be a runaway classic. As it stands, perhaps the paperback version should at least be recalled, edited, and rereleased.

Thanks for visiting my web site. While you are here, I invite you to look through the other pages. Feel free to make a comment in the area provided below. My novel, Deadly Portfolio: A Killing in Hedge Funds, is available in the Kindle format at Amazon for only $1.99.

Watch for  my new contemporary mystery,  Blood Lots, which is coming later in the Spring.