George Eliot’s Silas Marner was required reading in English lit when I was a sophomore in high school in the 1055. Written in the previous century, there was no way we guys would admit to liking the book. It was so old. Nothing in the days of George Eliot had any bearing upon our current time. Richard McCormack was our teacher, a gentleman through and through. We nicknamed him “Silas” because of his affection for Eliot’s novel. (I wonder if he ever found out.) By the time I began teaching sophomore high school English in 1962, a profession I undertook thanks to men like McCormack and my senior year teacher Richard Bisbee, Eliot had been dropped. Thorton Wilder‘s The Bridge of San Luis Rey had taken its place along with Hawthorne‘s Scarlet Letter (“How come she had the baby if she wasn’t married, Mr. Hohn?”) and an abridged version of Melville‘s Moby Dick.

I suppose the change was for the better. Kids took to the new selections readily. But I remembered McCormack and Silas Marner. My senior year in college, I represented my school at the annual Minnesota English Majors Convention and delivered a paper on George Eliot’s Middlemarch which is revered today as one of the great novels of the English language. I hoped I could produce a copy of my paper in preparing for this post, but alas, it vanished somewhere along the way. Prof Stephen Humphrey* helped me prepare the work for presentation. At the end of the conference, he said, “Your ending was especially strong.” I was surprised. He had never seen the ending. I had gone over most of the paper with him on at least two occasions. But the ending,  I had written it in my pajamas the morning of my presentation.

Prof had reason to be pleased with my ending, or at least relieved. The year prior, a senior with the first name of Paul  presented a paper on Shakespeare‘s King Lear at the convention and pretty much embarrassed Prof and the school by failing to draw any conclusion in his report or resolve it with closing remarks. “That’s it,” Paul said unapologetically as he stopped without abruptly with his unfinished paper.  To this day, I thought Prof should have checked Paul’s work. But then he never checked mine to make sure I finished it. I can only guess that Prof trusted us as scholars to do our utmost. Why I postponed writing the last two-and-a-half pages until the very last minute mystified me for years. Now that I write frequently, I have come to realize that I learned a great lesson from the experience.

Much of writing is exploratory, a poking and probing in the hope that the ideas just beyond my reach are viable and worth my time to run down. Once into a piece, however, I know that it must go somewhere, not ramble along like this posting is at the moment. I have learned patience. It is important to yield to impulses, apparent non sequitors that actually do lead somewhere after all. Some become sequitors, but like so many random articles throughout the house, all the ideas need finally to be rounded up to a conclusion. Readers expect closure. Sustaining ambivalence can lead to madness. So, as a piece feels as it wants to close, as I find myself exhausted of whimsy and inspiration alike, I try to embrace everything that found its way onto the screen (yes, the screen; not the paper – ah technology). Then, like a draw string on a large plastic bag, I cinch everything up. Pull it together with a knot of finality and pitch it out — out in front of others for their judgment.

I’m not there yet with this posting.

Prof Stephen B. Humphrey was a major influence on my choice of the teaching profession also. Students admired him. He taught courses in the modern novel and in modern poetry. Both were favorites. We called him the “silver fox,” hardly original, but word reached us that he was pleased. His choice for his class of an early novel was The Way of All Flesh by Samuel Butler. Anthony Trollope also worked his way into the syllabus, although I can’t recall which of his novels we read (a bad sign, I’d say). Trollope, however, was cited by George Eliot as one who had tremendous influence on her and she said Trollope’s Barchester Towers inspired her to write Middlemarch, which brings me  full circle and back to the real topic of this post.

I was pleased recently to note that a new book has come out on the life of George Eliot. Richard McCormack would be pleased,. may he rest in peace. Dinitia Smith’s wonderful new book The Honeymoon, recently released, is a biographical novel of the life of Marian Evans. 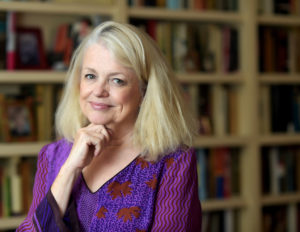 The Honeymoon opens with Evans as a wealthy widow at age 60. Evans gained fame as a novelist under her chosen nom de plume, George Eliot, during a time when women writers could not expect to be well received. Johnnie Cross, an elegantly handsome bachelor of 39, moved gracefully among the better circles in London society. Never much of a ladies man, whisperings drifted about whether he might be a “Nancy man” in the terms of day. Johnnie kept a secret certainly, one few knew. He withheld it from Evans even after they married.

Author Dinitia Smith sets up her biographical novel with the two unlikely newlyweds starting their honeymoon in Venice. Readers sense immediately that something is going very wrong. The stench of the canals, the sweaty, sneering gondolier taking them to their hotel, brown knots of feces bob in the water, all register with Evans. The canal is an open sewer – hardly a romantic setting.

When they arrive at the hotel, the manager recognizes Evans as George Eliot, the famous novelist, and the anonymity she hoped would keep their time together private is shattered. Cross becomes angry. He begins pointing out the sites of the city to his bride. He is so obsessed with the task that his wife cannot coax a smile to his lips. The next morning, she awakens to find him still in his evening dress (they slept in different rooms) which he insists on wearing to the beach regardless of how inappropriate his apparel may be. When he wades into the water fully clothed, Evans pleads with him to return to shore. The honeymoon is turning into a nightmare. With the irony of her title established, author Smith leaves the newlyweds and backtracks to explain how this mysterious state of affairs came about. 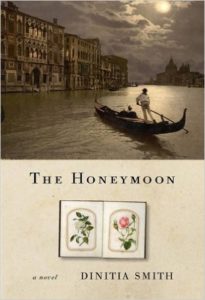 The Honeymoon = Book Cover at Amazon

Marian Evans was born on the estate that her father manages for the wealthy owners. She and her father were very close. Very bright, Evans’ finds herself at home in the company of some of the greatest liberal minds of the time. Her androgynous physical appearance leaves her yearning for love, especially after her father dies. Free love is in fashion among the literati of England. Evans yields to several men, but as they have other alliances, she is abandoned, heart broken and lonely. Seemingly resigned to her fate as a single woman, she begins to write, first for periodicals and eventually publishes a novel which becomes popular and favored by critics. She meets George Lewes, who is married, and the two leave for the continent where they set up household and pass as husband and wife – a la Mary Godwin and Percy Shelley a generation earlier.  Lewes becomes the love of Evans’ life. Smith presents their relationship with poetic sensitivity, a fulfilling relationship for both of them.

Evans is devastated when Lewes dies,. She returns to London to find whatever comfort she can among friends who include the greatest minds of the time. Her novels are praised by Turgenev, Ruskin, Dickens and Spencer, to name a few. One who attends her during her grief is Johnnie Cross.  He pledges his love to her and vows to devote himself to taking care of her. Evans has misgivings because of their age difference, the awkwardness likely in any physical intimacy and sends Cross away. He persists, however, and she eventually agrees to wed and the stage is set for the honeymoon.

The Honeymoon is compelling, compassionate biographical novel, a story best told by a woman of Dinitia Smith’s abundant talent and insight. The author describes her protagonist’s experience in finding the joy of her own writing voice as “. .  . arriving at the point where the words became a melody, took on life, filled the page, became, finally, a symphony.” The phrase could only come from another writer, one who knows the joys of gaining entry to the flow a piece, and the same phrase applies to The Honeymoon as Smith demonstrates her mastery of the language. Her phrases flow. They entrance. She slips into her heroine’s thoughts so unobtrusively readers do not recognize the change in perspective. Evan’s thoughts and feelings pour out onto the page with stunning authenticity. Smith transports her readers with the sights, sounds, scents and textures of her scenes. Marian Evans’ life story is well worth the read. The author’s style in presenting The Honeymoon is a masterpiece of contemporary writing – a study in itself.

Fifty-five years have passed since I delivered my paper on Middlemarch. There something very reassuring in realizing George Eliot’s work remains under discussion and that she as an author still commands the attention that she deserve.

* An internet search produces nothing on Stephen B. Humphrey except notes on the theater named after him on the campus of St. John’s University. Prof was very self-effacing. It is a credit to St. John’s that they honored him by naming the theater after him. Nevertheless, somewhere amid all the historical photos, one would hope to find a photo of Prof.

This review first appeared in bookpleasures.com in a somewhat condensed version.

Thanks for visiting my web site. While you are here, I invite you to look through the other pages and please feel free to enter a comment in the area provided below.