Terrorists  need to be wary. Kyle Keyes’ latest novel, Martin Swan’s Diary, is an hilarious account of how the intrepid agent, Martin Swan, tracks them down and thwarts their attempt at mayhem and slaughter in the nation’s capital. It’s a complex story.

Don Miguel Alfonso Santinio wants his grandson Timmy back with the Santinio clan, a large extended family with Alfonso as the would-be-godfather. Timmy’s mother Jodie has taken the boy from his father and fled in the company of a federal agent, Martin Swan. Swan and she became friends after Swan saw her on stage and decides that she would make the perfect cover wife for him as he begins a mission to intercept Arab terrorists who are trying to enter the country. The Arabs, upon arriving, plan to smuggle 450 hand grenades ashore, plant them into 450 pumpkins, and place the pumpkins on Halloween in strategic locations in and around Washington, D.C. Swan is hot after the terrorists; Santinio is hot after Swan. The chase is on.

Agent Swan and Jodie leave her son Timmy with her sister. Jodie dons a wig and the couple race down Atlantic coast to a trailer park with a gated entrance. There, under cover, they await the arrival of the terrorists. Never mind that agent Swan blows his cover again and again. His fake mustache falls into his soup. He is arrested repeatedly by local authorities for traffic violations. Neighbors take Jodie to be Swan’s daughter rather than his wife, an impression reinforced whenever she puts her wig on backwards.

Flashing His 40 Million in Lottery Winnings . . .

Meanwhile, Santinio dispatches family member after family member to locate Swan and Jodie and bring his grandson back. All fail. Alfonso never thinks to check the home of Jodie’s sister for the youngster, but then the old patriarch is obsessive and bent on impressing others by flashing about his 40 million in lottery winnings. 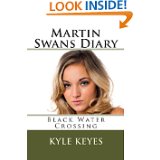 Swan’s mission broadens when finds that he and his troop, the invisible six, must stop a nuclear threat to the country. The terrorists, it turns out, are also bringing in the components for an atomic bomb.

Santinio, miles distant, rounds up an armada of vehicles – everything from an Oscar Meyer wiener mobile  to a WWII vintage motorcycle – in a chase after Swan. The caravan charges down the interstate to the sound of a bugle blaring at every toll booth. For all this improbable, sometimes over-the-top hilarity, author Keyes takes his story very seriously.

In fact, Keyes writes so well that readers might be reminded of Robert B. Parker or San Alini or other author with a gift for snappy dialogue and the genius to capture a setting in a single sentence. Keyes story moves with at a terrific clip. The plot is tight. Not a wasted word or phrase anywhere. Keyes’ imagination seems boundless; his sense of the comic ranges from ironic to satire to slapstick. He pokes great fun at the retirement culture in Florida. He knows that kids can be very funny. Yet, at the moment his story seems about to leave the tracks, the author pulls the reader back into the reality of what is really at stake. Swans’ bumbling suddenly gives way to quick intuition, decisiveness, and forceful leadership. A modicum of credibility is further restored by the author’s attention to detail and the thoroughness of his research.

Keyes is an accomplished writer with a deep understanding of the story-telling art. Martin Swan’s Diary is executed so well that the book demands to be accepted on its own terms as a comedy.

Fact is, however, that comedy’s universe is a small one. Standup comedians know this. Every audience has its limit. The same gag can be repeated perhaps twice but anything beyond that is risky. If Agent Swan’s mustache dropped into his soup for the third time, it would not be funny. If Jodie kicked the backyard pet egret one more time, it would be mean-spirited. If the antics of Keyes’ characters ever drift into poignancy, the laughter stops. Sympathy and compassion step in and the action launches into the infinitely larger universe of drama. Keyes goes to full flaps just in the nick of time again and again to keep things light, to avoid exciting compassion or fear or anger or any other emotion in his readers. Laughter, however, prevails.

Kyle Keyes must see himself first and foremost as a humorist, but readers may finish the book wishing that his artful novel was also real enough to stir more deeply into human emotions – as if, in other words, the comedy gave way drama. Kyle Keyes certainly has the mastery as a writer to do either.

This review was initially published on bookpleasures.com. Minor changes have been made in the version above. If you have enjoyed this review, I invite you to look through the other pages of  my webs and feel free to comments in the area provided below. My novel, Deadly Portfolio, is now available on Kindle for $1.99. Thanks for looking in.

Posted in Humor, Reviews and tagged humor and farce, terrorism