Teaching was my vocation of choice. Upon entering college, I initially  chose business administration as a major. Somehow I imagined a career where I would rise to become a captain of industry. Never mind that there were no major companies in my hometown of Yankton, SD to give me any inkling of what a business career might actually entail. One semester of accounting, however, I change my mind. I didn’t understand accounting. I didn’t like it. It all seemed a hopeless abstraction begging my brain to be facile in arenas where I didn’t possess an iota of aptitude.

I switched at the beginning of the sophomore year to major in English. Teaching then became an aspiration. I remembered the fine teachers from high school – Don Allan, coach; Les Iverson, science and coach; Richard Bisbee, English; Richard McCormick, English; Hal Kempf, algebra; Don Harkum, history; Al Halstead, chemistry and physics; Bessie Burgie, Latin; Richard Greeno, biology; George Bauer, study hall and all round great guy; Raleigh Steinbeck, homeroom; Bowman Thrall, electric shop; Ambrose Schenk, economics debate coach and drama and Fred Johnson, music. In a town like Yankton in the 1950’s with a population of about 8,000, everyone knew almost everyone else.

Teachers were a big part of growing up. Given that my high school class is coming up on our 60th reunion, most of our teachers are no longer among us. Their good work and example lives after them. I wonder if they knew how much they were appreciated. The Press & Dakotan wrote a fine piece on Al Halstead and George Bauer. Richard Bisbee passed away recently. Classmate Dick Lucas put me in touch with him, and we corresponded several times before his lost his battle to cancer. Coach Don Allan and I struck a correspondence when my brother sent me a book about Yankton’s history that he got Coach Allan to sign for me.  We corresponded a couple of times a year up until the time of his death. Here is another story that makes a simple point. 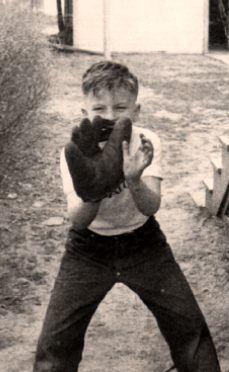 Don Harkum, my high school history teacher, coached little league baseball in the summers when I was a boy. I was never good at baseball. As one of the younger kids on the team, I would be dispatched to the outfield where I embarrassed myself at least once in every game by seriously misjudging a fly ball. Invariably, I ran up on the ball only to see it sail high over my head. My older teammates groaned when they saw what should have been an easy out turn into extra bases for the runner while I turned in my humiliation to chase down my miss. My boyhood pal, Ken Herfkens was a better athlete than I. He would try to console me about my bad play, but I knew that I looked like an idiot.

“Next time you see a ball coming your way in the air,” advised Donald Duffy, one of the older boys on my team, “just turn and run away from it. Don’t try to catch it. Just run away until in lands and then get it and throw it in to us.” Duffy played short stop. Tousled straw blond hair and freckles, he looked just as his name would have him look. My pride would not let me take his advice seriously, however. I knew he was urging me to accept a weakness in my game and adjust for it.

As I thought back on all my failures, I realized that if I simply stood still and waited for the ball, it probably would come directly to me. I didn’t need to run from it, as Duffy urged. I resolved that when the next a fly ball was hit in my direction I would stand perfectly still and wait for it. If I was going to look like a fool, then I might as well look like one having the ball drop in front of me where I could pick it up quickly and put it back into play. Better that than the humiliation of having a ball fly over my head because I misjudged it.

Every team had its big hitters, the older boys who had moved into puberty well ahead of schedule – boys who had deep voices and muscles like grown men. Dick Lubers could have been a semi-truck driver who parked his rig at the curb and came onto the field to show the kids how to hit – he was that old and strong looking. Clarence “Coon Dog” Smith could have passed for 28 years of age, maybe older. Bud Karvosa looked older than the priest when he served mass as an altar boy. From the Sacred Heart School playground, Karvosa could hit a softball up on the roof of the Lutheran Church (no longer standing) that stood across Sixth Street where it intersects with Capital Street. Al Pieper was a bull of a kid when he was in eighth grade. These guys were formidable at the plate. Infielders prayed that the ball would not come their way. Outfielders backed up and shifted to the left or right depending on what they thought was the best place when a missile came barreling their way.

Fourth Street in Yankton circa 1948. The Main Drag.

Lubers was at the plate the day I put my resolve to test. I was in left field. Behind me was a snow fence that had been set up simply to give batters something to shoot for. Without it, longer hits would have either bounce off Nash Gymnasium, if hit to left field, making them too easy to retrieve, or if to right field, would have rolled hundreds of feet out into Mulberry Street and a runner would have rounded third before the hapless outfielder caught up with it. I was in left field. The fence at my back, I stood my ground.

Ka-pow. Lubers connected. Yes. Oh God. It was coming my way. Every sinew in my body wanted to charge forward to meet it as I had so many times before, but I held firmly to my resolve. The ball had started its fearsome descent like a missile aimed right at my head. All of my teammates were yelling, “Get back. Get back!” All season long they had seen me run forward and thus under any ball hit my direction. That intense second has been frozen these many years  like an hour of time in my memory.

I held up my giant three-fingered first baseman’s glove, a Wilson Trapper that I had nagged my dad into buying for me. Pop! The ball was in my glove. I caught it. I actually caught it. One handed! I looked at the ball. I looked up and saw big Dick Lubers pull up in dismay as he rounded first and headed for second. Swearing wasn’t allowed, of course, but what I heard roaring out of the big guy might as well have been profanity. “Not Hohn. Not Hohn,” he bellowed, signaling that he thought he had a hit for extra bases if not a home run.

At shortstop, Duffy was yelling, “Throw it! Throw it in!” He snapped me out of my state of profound astonishment. I reached into my Trapper, retrieved the ball and hurled it with all my might at Duffy. It went wildly off target, but Duffy, who was at least as amazed as I with my catch, didn’t seem to care. Lubers was out. The biggest threat in the lineup was walking back to his team’s bench, shaking his head in disbelief with every step. We were going to win the game.

This is a story after all this time is more about the men and women who inspired me by their example to consider a career in teaching. Al Halstead, the chemistry teacher, supervised the Little-League baseball program in Yankton. He would umpire behind the plate and encourage batter after one pitch and the catcher after the next. Don Harkum assisted often with the games and Mr. Harkum was there the day I caught the ball the big Dick Lubers hit.

Harkum and his wife lived in the Hudson Apartments that summer, just across the street from my home on Fifth Street. For some reason, I did not have my bicycle that afternoon, but as I was walking triumphantly off the field of praise, Mr. Harkum asked me if he could give me a ride home. I accepted.

Pulling up to the curb at my house, he said, “You saved a home run today. Do you know that you did?”

“Was I that close to the fence, Mr. Harkum? Would it have gone over?”

“You bet it would have. You stuck that big mitt of yours up there above the fence and hauled it in.”

“I saw it. You did. You saved a home run, maybe the game,” Mr. Harkum repeated.

It was a boy’s successful experience and a memory that it important to me. Mr. Al Halstead and Mr. Don Harkum would be my teachers in high school just a few years later. That fly ball and that day may never have been mentioned again between us, but I was grateful that I knew them and they knew me when I entered high school. I am grateful to this day that I grew up in a small Midwestern town where such things were possible.

In a better world or in better times, teachers would not have needed to take summer jobs in order to support their families. But at the age when I was boy, given that it was necessary for them, they did with spirit and a deep interest in the children of the community. Their impact on all of us who knew them has been lasting.

Thanks for looking in on my site. I invite you to look around among the other pages or enter a comment in the area below.