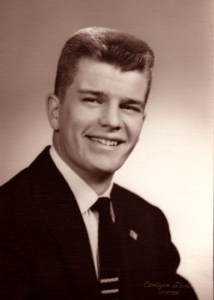 My Year Book Picture as a Senior in High School

The scandal at Penn State has the media all fired up these days. Understandably! If you were raised Catholic, you may not be quite as surprised or outraged as your non-Catholic friends and acquaintances. I had never heard of sexual abuse nor had I experienced any as a boy. I had not, that is, until I got to college and auditioned for the Men’s Chorus.

The vow of poverty for the director of the chorus was expressed in his lavish office in the university auditorium, complete with grand piano, a posh living room setting, and a bar complete with refrigerator. I was fairly confident that I would do well in the audition. I had been singing in the church choir in my hometown and in my high school chorus. I had taken piano lessons. I could read music and was familiar with two, three, and four part harmony choral music. I had solid baritone voice with an impressive range, so the singing part of my audition went without a hitch.

When the priest completed his evaluation of my abilities, he asked me if I liked Irish whiskey. I admitted that I had never had any. He got up from the piano, walked to the bar and poured me two finger shot and told me to enjoy the aroma. I held the glass to my nose. The rich pungent scent almost brought tears to my eyes. I took a sip and the priest invited me to sit down on a large couch. He sat down beside me, lifted my leg nearest him, dropped it over his, and fondled my genitals through my blue jeans.

He was a priest. A monk! An authority figure in my life both spiritually and academically. I was sexually experienced. My girl friend had a baby my senior year in high school. I had heard about males being interested sexually in other males. We called them queers or fairies. Queers wore yellow and green on Thursday. I had not heard the term “gay” used in anything but Christmas Carols. In fact, I had not heard the term heterosexual because I assumed all the world was straight, in itself a slang term that I came to know only years later.

The priest found my testicles and toyed with them gently. I was stunned. A paralysis overtook me. I couldn’t speak. I was 18 and felt powerless (see above photo). I simply endured the discomfort and the shock of what was happening. I don’t know how long the encounter lasted—probably less than a minute. It ended when the priest stood up abruptly and announced that the results of my audition would be posted on the auditorium bulletin board and I was dismissed.

My audition was successful, and as weeks passed, I found that others had undergone the same fondling by the priest. Upper classmen reported that it had been going on for years. It became a matter of humor among us. Better to laugh it off than to allow ourselves to feel violated and outraged. We were real men, after all. Our sexuality was not the issue.  And, of course, I eventually found that there were gay guys in the chorus and on campus and that everyone acknowledged it, and for the most part, accepted it. The moral legacy that I carried on to campus from my upbringing was that homosexuality was an abomination—a mortal sin.

In classes, I was distressed to discover that poets, authors and artists were acknowledged homosexuals. The works of such men had to be inferior or that the reports about them had to be false. Nothing beautiful or moving could come from persons so perverse and destined for hell. I did not want to associate with any known homosexual for fear I would be considered one. I knew the ostracism the homosexuals endured, the cruel humor and derision, and I never wanted to be a target of that kind of abuse from my fellow students. Mine was a deeply imbedded prejudice that took years to overcome.

Some kid from the Midwest, just as naïve as I but outraged to the point of taking action, probably reported the choir director. The man was allowed to finish the academic year and then quietly transferred to some unsuspecting country parish in southern Minnesota or eastern Wisconsin.

Just as the coaches and administrators at Penn State may not have wanted to report Sandusky for his outrageous acts, the Abbott, the Dean, and the monks at the university did not want any publicity over what had transpired between the choir director and me and countless other young boys because it would reflect on the institution itself. At reunions today, 53 years later, those of us who were in chorus with the priest, still joke about it. We joke, yet over the years there have been many other instances of the same behavior reported at the university and among the parishes.

Silence is enabling. The moral issue is not whether the offending party—cleric or lay—is homosexual or heterosexual, although I suspect the outcry is more indignant with the former. The moral issue is that an adult is abusing a child. Academics and clergy use their position to exploit the naivety of the young people entrusted to their care. Many of my classmates, who have remained devout Catholics to this day, still find ways to rationalize their failure to speak out and take action. They support a conspiracy of silence. Their passivity is tantamount to condoning the behavior of the offenders and suggesting that the greater sin is simply being caught.