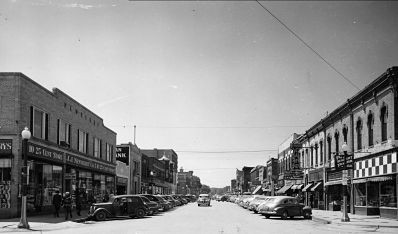 A dime store was a dime store in the 1940’s. No two ways about it. Scott’s called themselves a “five-and-ten-cent store.” Newberry’s went one better. See the sign in the picture to the right that has been copied from a postcard as it was in the mid-1940’s. Newberry’s proclaimed they were a 5, 10 and 25 cent store. The stores carried items that were more expensive, but the bulk of the inventory, like the dollar stores of today, was priced well within a range of a kid’s weekly allowance. Merchandise was displayed on open counters. Shoppers could pick up items and examine them.

Inside a Dime Store

Aisles allowed customers to walk from one display counter to the next. Each counter was an island with an open space at the center as a walkway for a salesclerk who greeted customers approaching the counter. There were no blister packs or pegboards at the time. Once a customer made a selection, the item was handed to the salesclerk who rang it up, placed it in a paper bag, and handed it back with a proper “Thank you.” The ratio of sales clerks to customers must have been 10 times higher than what one would find in a Wal*Mart, a Home Depot, or a Lowe’s today. 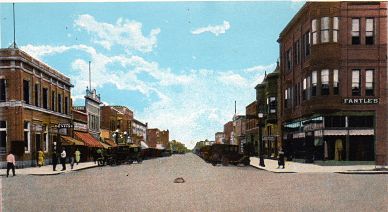 My Dad’s office was on the left above the sign that is not his as this picture was taken in the 1930’s before he set up his practice.

My father’s dental office looked down directly on both dime stores from the second story of a building across the street. Dad never turned me away if I dropped in on him. One afternoon,  I found a wallet at the dime store I had to have. It contained a plastic coin holder so that pennies, nickels, dimes and quarters could be held separately from one another in individual slides. I raced to Dad’s office to tell him about it. He didn’t always give in to my pleading, but on this particular day he did. I dashed back down the staircase, crossed the street, charged into the store, and bought the wallet. Back across the street again to show Dad.

He examined is slowly. “This is a woman’s wallet, son,” he said finally. “No man would carry this.”

I was stunned. I couldn’t see what made it a woman’s wallet. “How can you tell?” I asked.

“See here, this strap on the side where you can slip your hand in to carry it. That’s the way a woman carries her pocket book.”

I was downcast. I wouldn’t carry a woman’s pocket book anywhere, even if it did have separate slides for my coins. “Could we cut the strap off and then it would be a man’s wallet?” I pleaded.

“We could do that,” Dad said and walked over to his dental cabinet, retrieved a pair of scissors, and cut of the hand strap. “There you go. Now use it to save your allowance each week.” 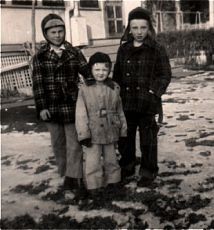 My Pals in the Backyard of My Home, Lent, circa 1947. About the age when roamed the dime stores

The first gift that I ever bought for my mother was a pie bird that I found in one of the dime stores. I did not know what a pie bird was at the time. I was barely tall enough to look over the display counter, but I spotted a blue pottery bird that seemed to me as if it was singing. My mother liked birds. I liked this bird, so I counted out my pennies and bought it for her. The salesclerk, probably a young girl from town, was so tickled with my selection and my reason for choosing, it that she picked up a baseball cap from the counter and plopped it my head. “He’s so cute,” she gushed to a nearby associate who was watching our exchange. The cap was too large, but then I was probably too young to be buying a present on my own also.

I was living in Winston-Salem, North Carolina in 1984 when my mother, who still resided still in Yankton, was diagnosed with late stage cancer. Christmas was upon us, and I planned to return to be with her for the holidays. I set out in search for a gift for her. I did not need to look very far. I found another pie bird, smaller but blue in color. I took with me to visit her.  “Oh,” she exclaimed upon opening it, “now I have two.” She remembered my first gift from almost 45 years earlier.

Mother died January 15, 1985, just a couple of weeks after my final visit with her.  I recovered both pie birds from her things at her home. I have them still.

I invite your to comment below and to take a few minutes and check out the other pages of my web site.