Media legend Bill Cullen never had a bad day in his life. It’s true that he was afflicted with polio in his youth – a disease that left him with a pronounced limp. It’s true that his first marriage – to a woman his mother chose for him – failed after four years. A second marriage, to the attractive, vivacious Carol Ames, collapsed under the strains placed on it by two demanding careers. No, the resilient, indefatigable and ebullient Mr. Cullen navigates these setbacks like a contestant on Beat the Clock and emerges unscathed and ready for the next challenge.

Cullen’s career takes off with the love and support of his third wife, beautiful Ann Macomber Cullen. Their childless marriage is joyful and lasts the rest of his life. Ann remains at home while Bill rushes from studio to studio, even coast to coast before jet air travel came into being, at a pace that suggests to even the least lethargic that something of the manic must be driving the man.

If the reader is looking to Adam Nedeff’s biography, Quizmaster: The Life and Times and Fun and Games of Bill Cullen, for the keys to Cullen’s personality, the forces that his drive and passion, forget it. Cullen, according to Nedeff and scores of other celebrities, is that Cullen is as he is – an uncomplicated genius who is kind, considerate, creative, generous, and funny. Cullen describes himself as a writer who works in television and radio. And work he did.

Starting as an adolescent, he worked without pay in the studios of the limited range pioneer radio station WWSW in his hometown of Pittsburg, PA where he began a career as a late night disc jockey. Radio grows, of course, and so does Cullen’s career. He calls radio his first love and remains loyal it even as he moves into TV.

Cullen moves into TV with ease, his limp hidden from view by the camera. His wit, charm, ease with others, and poise when the unexpected happens makes him the top man in his profession – a profession that lists notables like Gary Moore, Steve Allen, Gene Raymer, Dick Clark, John Daly, Allan Funt, Alex Trebec, David Letterman, to name just a few.

Nedeff finds no dark side to Cullen, perhaps by choice. The author is impressively thorough in his research that includes viewing kinescope recordings, listening to tapes, interviewing friends and family, and reading all that has appeared about the man. The problem with the book, however, is that Bill Cullen comes off as shining white all of the time. Nearly every chapter begins with homage to him as a man who was a thoughtful, engaging colleague, the guy who remembers the little people on the set, who never fought with anyone, never carried a grudge, or refused an offer to help. Dying from cancer, Cullen marshals his meager reserves to get out of bed, dress and take his beloved Ann out to dinner one more time. Readers learn nothing about Cullen’s political or religious views, although he was raised Catholic. What the reader encounters over and over is that Cullen was loved and respected by all who came into contact with him. 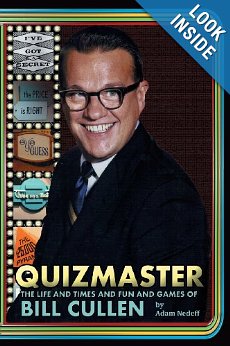 Cover to “Quizmaster: The Life and Times and Fun and Games of Bill Cullen” by Adam Nedeff

Nedeff understandably devotes time to groundbreaking shows as The Price is Right, What’s My Line, I’ve Got a Secret and $20,000 Pyramid. The book is an encyclopedia for the devotee of game shows as it traces the history of the genre from the initial two-camera black-and-white offerings through to color, live taped shows, and the migration of studios from New York to Los Angeles. For the reader less than enamored of the media specialty, the book bogs down. Detailed reviews of the shows that failed and the reasons for their collapse will carry special interest for historians and aficionados. Others will begin counting the number of pages left until the end of the book.

Nedeff is a skilled writer. Featuring excerpts from the transcripts of the shows on which Cullen appeared is a welcomed break in the flow of the book, as are the many photos. The book is a treat for those who remember when television was first introduced into their homes.

It is difficult to decide for whom Nedeff intended his work. The detail – perhaps trivia – borders on tedium for the average reader. Absence of any depth to Cullen’s motivation and passion push the depiction of his character to the point that threatens to become, while admirable and positive, almost one dimensional. Readers expect a biographer to ask why. Nedeff never does.

The book is a prodigious accomplishment that perhaps would have been better executed in two volumes; namely, one about Bill Cullen with less detail about the shows and a second to showcase Nedeff’s exhaustive research.