Malcolm Toussaint is a haunted man. He was in position to save Martin Luther King from assassination but failed to move fast enough to get the civil rights leader out of harm’s way. Only nineteen years old on that fateful balcony in Memphis in April, 1968. the tragedy lodges in his subconscious. Its sting charges back into his awareness whenever he feels he hasn’t tried hard enough – which is most of the time. In his role as an internationally recognized Pulitzer Prize winning columnist for The Chicago Post, Toussaint exhausts himself trying to bring enlightenment and understanding into the racial strife rampant in the United States. Forty years of trying wear him down. Frustration finally wins out.

Grant Park by author Leonard Pitts, Jr. follows Malcolm Toussaint, a young, bright African-American, along with several of his contemporaries, through the decades beginning with the King assassination and culminating in Barack Obama’s 2008 triumph as the first African-American to be elected President.

The book begins on the eve of the election. Convinced Obama cannot win, Toussaint rips off a column that screams of his despair with white America. When his white editor, Bob Carlson, refuses to print it, Toussaint goes over his head to Lydia Barnett, the African-American Editor-in-Chief. “Do not play more black than thou with me,” she scolds, realizing the Toussaint piece is too inflammatory. Toussaint storms off, downs a few beers and returns late at night, armed with Carlson’s password to the composition room, and plugs his column into the front page despite his editors’ rejections.

Readers, especially those whose first vote was cast for JFK, will be gripped immediately by this fast paced story. Toussaint’s inflammatory column may leave some liberal oldsters wondering why the fuss. Haven’t we all tired of the bullshit? Perhaps that’s easier to write in 2015 than 2008, but for those dreadfully disheartened over Ferguson, Baltimore, Eric Garner, the continued rash of police shootings, Toussaint’s column speaks for everyone who has hoped for more.

The paper reacts by firing Bob Carlson, the 59 year old editor who gave away his password. With Carlson, Pitts begins another compelling story. Carlson, an idealistic, fundamentalist Christian white kid from Minnesota, falls in love with a beautiful, bright African-American girl, Janeka Lattimore, and the two work diligently to increase voter registration. Both are children of the 1960’s, the kids that Pitts describes as:

Young men and women with big Afros and Jewfros and long blonde locks and strident voices singing songs of peace and love and revolution, a whole generation of them, fresh and raw, untainted by the failures and compromises of their parents’ generation, utterly convinced that they were something this old world had never seen, a new people thinking new thoughts that had never been thought before.

In 1968, their relationship required courage. Yet, many things go their way. Carlson’s family is gracious, supportive, and accepting. It is not enough, however.

“I have to be with my people,” she shouts in breaking up with Bob.

“I thought I was your people, too,” he replies.

Janeka doesn’t break up with Carson, instead, as Pitts writes, “She breaks him.” Carlson never engages in any kind of romance again. He becomes an “inside the lines” kind of a guy. Pitts writes, “His faith seemed to have gone the way of his empathy.” 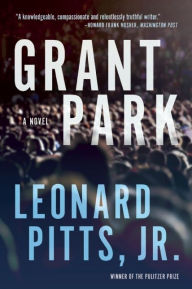 Pitts is a master of timing. Just when the reader expects Toussaint to face his editors about the way he shanghaied the front page, he is abducted by two white low-life racists who plan to explode a bomb in Grant Park when President-Elect Barack Obama appears to make his acceptance speech. Thus begins the first probing explication of one dimension of the racial conflict examined by Pitts; i.e. bottom of the barrel whites versus top of the barrel blacks. The first bottom of barrel white introduced is Clarence Pym, a huge man because of gigantism. Pym metaphorically represents rampant, irrational, bloated white racism. Pym is the part of racism white America does not want to do anything about. All the more indicting is that Pym actually has a conscience. He befriends his Toussaint, his captive, by conversing about the neutral subjects — the no-race zone — of sport and popular music. The choice of character’s name must be deliberate. Pym is so close to Prim (as in prim and proper, a connotation reinforced by the image presented of the man’s home fastidiously maintained by his mother) it suggests that friendly banter, as exchanged between Pym and Toussaint, cannot be taken as an indication that all is well. Prejudice lurks beneath the pleasantries. Ostracized most of his life because of his bulk, is the pawn for nasty, deranged Dwayne McLarry. McLarry is the irrational, murderous side of white racism, incapable of empathy. These two severely limited human beings form the WRS, the White Resistance Army, and hold up Timothy McVeigh as an idol.

Lower economic level blacks are represented by Toussaint’s father, a Memphis sanitation worker whose singular demand is to be treated as a human being. His protest sign proclaims, “I AM A Man.” His son, a black power advocate, derides his father’s efforts as anemic. The march by the sanitation workers in Memphis bring father and son together, and though they differ with regard to how the protests should be conducted, they become reconciled. The old man says, “Seem like just recently here, first time in my life, I done finally figured out who I been mad at all the time.”

Pitts dramatizes all the diseased levels of the conflict between the races when Toussaint makes his explanation to his African-American boss, Lydia Barnett. Barnett, being black, understands what it is that has so exhausted her columnist.

It is the near instinctual recognition that we differ, and the difference, despite all evidence to the contrary, is not to be trusted. Or as Lattimore explains, “It’s like walking around your whole life with a pebble in your shoe that you know you can never remover.” It is the reason the lab technician let you wait in the lobby. Why the cabbie passed you by. Why you did not get the promotion. It is still there, every day, living in the minds of white and black alike and differs only in degree. “Black people,” Malcolm reflects, “often cited race to explain stuff race had nothing to do with.” Pitts demonstrates repeatedly that the same holds true for whites.

In the same setting, Lattimore confronts the white complacency in Carlson, ” . . . white people always think having a fine car or nice clothes or money or social standing puts you beyond racism — and it doesn’t. That’s the whole point. That’s why its racism.”

Grant Park is a brilliant work. The only detracting flaw is one most readers will not notice. Park fails too frequently to maintain the integrity – the metaperspective – of his narrator. An omniscient narrator speaks about characters, but never for them. When, for example, the vicious, white-supremacist McLarry wants to shoot a cab driver, a sentence reads: “He really wanted to shoot the prick.” The sentence is in the author’s voice until the word “prick.” “Prick” is McLarry’s word. McLarry jumps the narrator’s line – hijacks it. Characters jump the narrator’s lines again and again. The result is distracting and weakens the authority of the narrator’s voice.

A thoroughly credible plot is marred only when readers need to assume that McLarry, high on meth, knows Carlson on sight when he finds the editor lunching with Lattimore in an upscale restaurant. The deranged killer didn’t know editor’s name hours earlier at the newspaper office.

As to his power, Pitts rises frequently to the level of pure poetry. Consider one example: “A fatigue older than rivers rode the curve of a closed smile.” Readers are treated to lines like this throughout.

His description of the riots in Memphis from, not one, but three points of view, is riveting. Lattimore and Carlson run for the safety. Toussaint’s father despairs at the chaos that is ruining his protest. Toussaint joins in the vandalism only later to regret his actions. Pitts’ characters are believable, deep and richly human. He writes with confidence in the voices of his young, his old, his white and his non-white characters.

Grant Park is a monumental work, so all-encompassing in scope that reviewers will be hard-pressed to do it justice. Pitt’s passion for a solution holds strong to the end of his novel even as his central character seems to give up. Readers will find Grant Park is real. From beginning to end it shows us an illness that seems to defy a cure. Perhaps as our children play together, the day will one day arrive when, despite even our slightest misgivings, we will recognize the humanity in one another. Pitts is there. He, for one, has shown that we are the same.

This review appeared initially in a somewhat condensed form on the web site bookpleasures.com

Thanks for visiting my web site. While you are here, please take a moment to look through some of the other pages. I also invite you to comment in the area provided below.