Pure Act: The Uncommon Life of Robert Lax by Michael N. McGregor is a powerful biography of a poet who only recently has been recognized for his contributions to the evolution of contemporary poetry. The book succeeds on several levels.

Lax was born to immigrant parents in Olean, New York in 1915. The middle class values of his Jewish upbringing instilled in him a deep desire to achieve. His mother nurtured his aspirations and his loving relationships with his siblings, especially his sister Gladio, lasted all of his life. Coming of age during the depression – a time of financial hardship and open antisemitism in America – Lax enrolls in Columbia where he finds himself quickly at home among some of the brightest of his generation, including lifelong friend, Thomas Merton. Here also, Lax meets the Hindu monk, Mahanambrata Brahmachari, who Lax describes as the first true ‘holy man’ they’d (Lax and Merton) met.” McGregor writes:

The influence of Brahmachari’s words and way of being was so pivotal and long-lasting that Merton mentioned him in his last letter to Lax, days before he died. By then, based in part on decisions Brahmachari had led him to, Lax was living in a manner much like that of the guru in blue sneakers.

A list of all who influenced Lax during these impressionable years would be long indeed. Lax, however, was not part of the mainstream. Rich in detail, McGregor’s narrative never bogs down, a credit to his easy, flowing style. Sensitive readers will walk away from the book feeling that they have spent time in the company of an enlightened holy man – a rare and beautiful accomplishment for any writer.

Precursor to the Beatniks . . .

Merton and Lax room together upon graduating in a cottage near Lax’s hometown of Olean. The cottage becomes a hangout for others who, like Lax and Merton, were ambivalent about starting a career. McGregor suggests that their community was a precursor to the beatnik subculture that would emerge twenty years later. Nevertheless, during this time, Lax read the Bible and the works Shakespeare, Dante, Eliot, Blake, Donne, St. Augustin, and St. John of the Cross and others – all of which bring about a deepening of his spiritual beliefs.

All of Lax’s friends grow apprehensive about the conflict in Europe. Lax frets about what he should do and decides finally to register as a conscientious objector, a decision that put him at odds with some of his friends. I do not believe in killing, he writes. I will not kill. McGregor reports the poet writes with the unshakable conviction that “what he did and said had wider, even eternal implications.” In working out his position, Lax writes further, The world is, or seems to be (except for disease, unfortunate accidents, hostile beats, poison plants, murderous thievish, blaspheming, idolatrous, lying, adulterous, scandalous man) for joy.

These statements, all part of a single journal entry, might seem grandiose and naive – almost to the point of humor. Lax knows his mind. What his statements measure is not the young poet’s maturity but his passionate commitment to a view of mankind in the world and his place in it among his fellows.

Author McGregor seems aware that readers may misjudge his subject, perhaps to the point of dismissing Lax altogether. Yet McGregor never assumes the role of apologist for Lax. The author’s view is not idealized. He trusts his readers and gives a balanced account. Lax is his own victim at times. He is listless and eager to please, indecisive and often unwilling to confront even when it is in his best interests to do so. But McGregor depicts rather than judges, subtly affirming the reader’s judgements rather than enumerating Lax’s shortcomings.

Friends eventually leave the cottage near Olean, Merton enters a Trappist monastery and Lax is fusses over what to do professionally. Despite holding positions with prestigious publications, He inevitably finds himself out of place. He abhors what the American world of commerce asks of people of talent. His solution is to seek solitude and live a life of poverty. Alone, his quest to discover and live as his true self will be unencumbered. As a man discovers his true self, he also draws closer to God. Man’s inner voice prays and talks to God. From the same voice poetry springs. McGregor writes:

In seeking to hear his inner voice, he was seeking as well to be a center of calm in the world. In making decisions or answering questions, he wanted to take his time, to let the answer rise quietly and naturally from his inner being – not a partial answer but a full one he could agree with completely.

As Lax takes up solitary residence among the residents of the Greek Isles, it is apparent the poet holds an idealized view of his neighbors, a view that is almost paradoxical – so fragile that if it were to be challenged, the impact would be profound, perhaps a shattering disorientation. Yet, his beliefs shape his perception. He sustains his view with the sheer power of his intellect. He wants to believe humans can live simply in the moment, congruent lives, where spirit, mind and body function as one, to live as a circus acrobat dashing toward a trotting horse, leaping into a somersault and landing upright and sure-footed on the animal’s back. Circus performers become yet another fascination for the evolutionary poet because in their movements, Lax see humans approximating his ideal of a pure act. 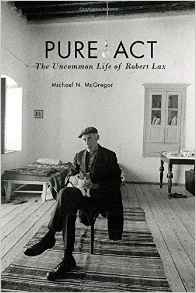 Pure Act: The Uncommon Life of Robert Lax as featured on Amazon

Lax’s poetry and other works did not receive much recognition during his lifetime. He worked in the shadow of Merton and persisted with little support from the larger literary community. In his passion for the essence of words, almost an obsession, he sought to strip every word of the accepted connotations and associations so that each would appear on the page, strike the reader’s mind, as a primal, discrete entity. McGregor credits him with the discovery of vertical poetry. In his restricted vertical poems, Lax dedicates a single line to each syllable. Syllables are to words what atoms are to molecules. Finding the true intended self requires purity of language. Pure prayer requires the same. His more expansive pieces are reminiscent of e. e. cummings in form, cummings being among the poets of the previous generation much admired by Lax.

In the 1950’s he meets Jack Kerouac and is impressed with Kerouac’s spontaneous writing, which Lax sees as akin to the work of one of his idols, James Joyce, in the freedom it enables and the belief that it accesses pure thought directly. Lax briefly weighs the merits of a theory emerging among mid-twentieth thinkers that art is to be created as art, as a being with itself as its reason for existing rather than as a mirror of life. Art is art. Life is life. Or so it is argued. Back on his island home, watching a girl weave a simple rug and fisherman repair their nets, Lax rejects the new wave of thinking. Art springs from life.

McGregor refreshes his narrative at intervals with engaging first-person accounts of his own travels and visits with Lax. The author’s voice is unpretentious and authentic. If his personal beliefs ever differ with those of his subject, it is never evident. Catholicism figures prominently in the lives of Merton and Lax. When Lax is asked why he converted, the poet states  that as a young man he needed more structure. Readers expecting more from a man of profound reflection and immersed in the writings of Aquinas, Augustine, John of the Cross – to name just a few – may be disappointed. Merton and Lax, aside from profound respect for the teachings of Christ – especially the Sermon on the Mount – are not reported as engaged much in the life of Jesus, the mystery of the redemption and resurrection. Both men seem more theist than Christian. In the end, Lax realizes almost as a concession that no one religion is ever enough. It is important to go beyond.

Pure Act is a book to own. Beautifully written, there is wisdom within its pages. Everyone’s walk is different. Pure Act has a place along everyone’s way to be read once, slowly, and referred to again and again. Life is to be lived slowly, Lax admonishes, because answers come slowly – as slowly yet persistently as questions do.

This review, in somewhat condensed form, first appeared on the web site, bookpleasures.com.

Thanks for visiting my web site. While you are here, I invite you to browse though the pages and  urge you to stay tuned. I never know from one post to the next what may come up. But stop by again. Please feel free to comment in the area below.