Seventy-three years have passed since the Japanese surprise attack on Pearl Harbor The attack took place during the early morning hours of December 7, 1941. President Roosevelt declared it “A date which will live in infamy” in his memorable speech to Congress just hours after the devastation was reported.  News of the attack galvanized the nation. Few of the adults who lived through the first terrifying months of World War II survive today. They are part of the Greatest Generation that is fading away with each passing month.

Most Americans know something about the story from the many documentaries and movies about the attack. For most, Pearl Harbor is an event out of the distant past.

The shock and horror of that day in 1941 may have been eclipsed by the terrorist attack on the World Trade Center September 11, 2001. Readers today who remember 911, however, can relate to how shaken their parents and grandparents must have been when the news of the Japanese atrocity reached them through radio broadcasts. They huddled together around their living room AM tube powered radio sets for news of survivors and what was to come next. Pearl Harbor was to the Greatest Generation what 911 is to the current. Uncertainly, fear and grief spread became a contagion. 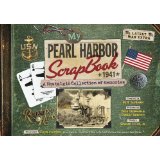 My Pearl Harbor Scrapbook: A Nostalgic Collection of Memories (click on the title for the Amazon listing) presents the Pearl Harbor story in a homey, poignant, and dramatic manner. Created by Bess Taubman, who is also a co-author with Ernest Arroyo, the entire story is endearingly presented as a scrapbook. Designer Ernest L. Cox, Jr. lays out all the pages as if each was carefully preserved as a personal memory by someone who lived through the events that pulled America into the war. The book tells the story in sufficient detail to satisfy an historian’s need for an accurate account of the events of the days surrounding the attack. Japanese strategy is laid out graphically. The maps are especially helpful in finding the points of the attack.

The story is told more with pictures than with print. The narrative is imbedded in reproductions of news articles, military dispatches, telegrams and photographs. The immediacy of this inspired approach makes the retelling at once precious and profound. Readers are treated to a rich presentation of what it must have been like to be alive at the time. The events in life that are most memorable are those in which ordinary people are asked to deal with extraordinary challenges. My Pearl Harbor Scrapbook brings this truth home in a manner that is touching and thoroughly human.

Online readers considering this book need to recognize that the designation of scrapbook refers to the manner in which the volume is presented but not to the size of the book. Traditional scrapbooks usually are about the size of a daily newspaper at the top of the stack in the stand to be sold. Pearl Harbor, by contrast, is smaller, measuring approximately 10 x 7 inches.  Pearl Harbor Scrapbook deserves a place on the coffee table at this time of the year. The book can be opened to any page at random and become immediately meaningful. It is a powerful reminder of our country’s recent past and honors the sacrifices made by the men and women whose lives were changed by that painful chapter in our history.

This review initially appeared in somewhat condensed form on the bookpleasures.com web site.

Thanks for visiting my web site. While you are here, I invite you to look through the other posts and pages. Please feel free to enter a comment in the area provided on the “Contact” page.