Ah, the lowly paperback. It has had a powerful impact on American culture. Author Paul Rabinowitz delineates the role it has played since first appearing for sale on American newsstands, drugstores, and coffee shops in the 1930’s. Her book, American Pulp: How Paperbacks Brought Modernism to Main Street, examines the often overlooked influence that the cheap, pocket-sized books had on every phase of American culture.

The word pulp usually often connotes prurient, escapist literature featuring unsavory characters who live outside the moral norms ostensibly espoused by the rest of society. Rabinowitz broadens the definition, however. For her, pulp defines the character of the medium; shoddily bound coarse paper volumes that degrade quickly.

According to Rabinowitz, pulp has influenced every facet of American culture from civil rights to the feminist revolution. It set the stage for the sexual revolution of the mid-twentieth century. The paperback, more than any other medium, carried Modernist thinking, or Modernism, into cities and villages across the country. As the author writes:

This is a story of paper, or rather of paperback books, produced in massive numbers between the late 1930s and the early 1950s These throwaway items hold within their covers a rich history of literary tastes; the point to, even reflect, a democratizing literacy and the new forms of identity and community that emerged in mid-twentieth-century America.

Curiously, the above passage is very good example of the author’s rambling, verbose writing style. If, for example, the story is about paperbacks, it follows that it would also be about paper. If the period of time for the study is from 1930 to 1950, readers know it is the mid-twentieth-century. Either “point to” or “reflect” adequately carries the thought, unless the reader is being asked to resolve the author’s ambivalence. 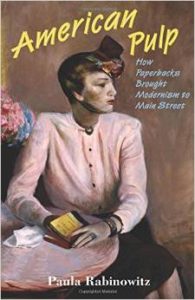 Rabinowitz writing reflects her passion for her subject. Some passages are truly eloquent and succinct. The highly quotable lines flutter around like canaries lost in a murder of raucous crows. What eventually wears the reader down is a tedium of overwriting. Rabinowitz slings a sentence like a hammock over seven or eight lines of text and then loads it up with subordinate clauses and phrases, modifiers galore, parenthetical observations, personal asides, multiple verbs and allusions to other authors, artists, historians and philosophers. She invariably prefers the less well-known modifiers. The phrase “The demotics of reading” appears no less the 4 times within the first 80 pages of text. (Demotics, the plural form, was not recognized by Word or  WordPress Spell check.) Demotic means ordinary, common or popular. Using the plural, Rabinowitz morphs the term from an adverb into a noun–commonness or popularity. Readers are usually accepting of a coinage when they are clever and easy to recognize. Not so in this case. This is writing to impress rather than inform.

Anomie, evanescent, quotidian, and totemic, as words, are impressive, but seldom heard in everyday conversation, even among academics and rarely found in paperbacks intended for the general population.

Rabinowitz writes around her subjects. Her definition of Modernism is there, of course, but sprinkled here and dribbled there when a straightforward presentation of the meaning in the context the author intends would be greatly appreciated.

Modernism, in its most pervasive form, represents a breaking away from the moral, aesthetic, social, political and theological values that prevailed through most of the 19th century and into the first few decades of the 20th. Modernism emphasizes individual autonomy over conformity to established ethical and aesthetic codes. The paperback was an effective stealth medium for tearing down old standards because it was cheap, portable, and widely available.

The author strives to make the simple point that slavery is a grave sin of America’s past. Racial discrimination continues today. The paperback put a tool in the hands of writers eager to address this evil as an unrecognized crime that goes on year after year in our communities. Paperbacks, the conveyor of sleazy sex and brutal crime stories, become the medium through which the crime of discrimination is exposed. Thus, a medium that is usually about crime becomes a tool against the ignored crime of racism. That’s what? Ironic? Making this point in writing about  African-American author Richard Wright, the author explains:

Crime, as a narrative device, enabled, as had for two of his inspirations, Theodore Dreiser and Fyodor Dostoevsky, his exploration of psychological and economic forces, showing how the two collide in an individual. But it did more for Wright – or rather he did more with it – and this is the subject of this chapter: how Richard Wright’s and Edwin Rosskam’s phototextual book, 12 Million Black Voices, supplements the crime narrative, or better, inverts it, to make clear that the crime, that which the American people (or at least white Americans) have been lied to and been lying to themselves about, was the crime of slavery and its attendant Jim Crow laws and culture of racism. This is the true crime story that Wright was exploding/exposing—America’s crypt encrypted, thoroughly evident yet utterly unrecognized, its corpse not dead by haunting us still.

Rabinowitz strains to make a several points in the above passage but simply overlooks the obvious. Wright and others used the paperback because it was there, an efficient propaganda tool, cheap, and widely distributed. The point is so self–evident. The author is over intellectualizing. The passage is representative of the style in which the book is written. It speaks for itself. Rabinowitz’s propensity for leaving the choice of verbs up to the reader and telescoping qualifying phrase within qualifying phrase creates a dithering maze that obscures rather than clarifies her thoughts.

This is all such a shame. Despite the author’s lack of precision, the book has many redeeming features as it includes numerous reproductions of book covers, some in color. The notes about the artists responsible for the cover designs are intriguing. Readers will be surprised by the names of some of the artist contributors. The author’s comments about collecting and collectors are some of the best reading in the book. This is a beautifully produced volume on an engaging subject that cries out for an editor’s hand.

Thanks for visiting my web site. I invite you to  look through the other pages now that you are here. Feel free to enter a comment on the “Contact” page. I promise all sincere comments will be posted and I will respond. Be sure to check back from time to time.