Steven M. Moore’s most recent mystery novel, The Collector, is an impressive addition to the author’s Castilblanco-and-Chen series. The book is out is of the gate on the first page as a narrator awakens to find herself bound, gagged and locked in the truck of an automobile with another unknown female companion. The trunk opens and narrator’s companion is stabbed to death.

Enter Castilblanco, Moore’s big guy detective, a rough and tumble city veteran who suffers from a chronic indigestion. The detective is called in to investigate the apparent murder of an art gallery owner, Brendan Rafferty. Accompanying him is female sidekick Chen, an exquisite beauty who has mastered the art of disguising her feelings behind what Castilblanco repeatedly refers to as her Mona Lisa smile. (Ah, the thriller tradition where female detectives are good looking. Makes one want to run a red light just to encounter one.)

Castilblanco takes over the narrative with a voice reminiscent of old radio noir mysteries like Johnny Dollar or Boston Blackie, perhaps Steve McQueen as a more contemporary example. The big guy pops Tums like M & M’s, refers to his wife by her last name, professes to be a convert Buddhism and opines about everything from modern art (hates it) to the vicissitudes of daily life in the Big Apple and contemporary politics. The detective’s raconteur style is abrupt as he presumes the reader recognizes that subject of his sentences in the breezy style of a personal letter. Found myself backing up to make sure I understood. Prefer that the subject is in a sentence. Don’t like the break in the flow. Although in Castilblanco’s case allowances are in order. He scores a lot of idiosyncratic points.

The plot thickens when an autopsy of the gallery owner produces a horse pill size capsule containing the names of three stolen masterpiece paintings. Art theft, kidnapping, child pornography and snuff films enter the mix. Readers share Castilblanco’s outrage and visceral repugnance at the horrific exploitation of the children. One vivid scene has Castilblanco finding scores youngsters surviving the dark stench of railroad box cars. One wishes in earnest that nothing like what described could actually take place in the world today.

The detective wants to solve the murder, yes. But above all else, he wants to bring the scum bags behind the pornography, kidnapping, and murder to justice. His rage drives the plot as day by day an elaborate financing scheme unfolds – the stolen masterpieces serve as collateral for financing the video productions. Solid citizens, at least as far as appearances go, are backing the evil enterprise. The plot takes several twists and turns, harkens back to Nazi Germany, involves Scotland Yard, and the FBI, “feebies,” according to Castilblanco—a nickname new to this reviewer, but then Castilblanco indulges in nicknames of all sorts, acronyms and slang. He also is keenly aware of ethnic differences. 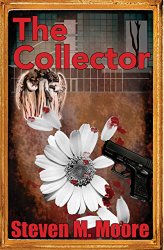 The Collector — Book Cover from Amazon

Author Moore changes point of view, or voice, frequently. Most of the time, his hero detective narrates. When Castilblanco is not on the scene, Moore uses third-person omniscient voice, a conventional practice. The compelling mystery story line would be better served, however, if the omniscient narrator sounded less like Castilblanco and a more like a detached, discrete voice of its own. Readers may find it a tad difficult to identify who the narrator is in some passages—a minor distraction.

The Collector is vigorous, forceful storytelling at its best. Moore’s moral perspective is clear. Castilblanco’s world is rich soil for nurturing cynics and pessimists. Moore’s detective, however, is a force of one, brimming with gruff optimism and hope. An idealist thrives underneath his sarcasm and his story makes for a great read for mystery fans or anyone looking for an entertaining tale.

The above is a somewhat shorten review that initially appeared in bookpleasusres.com.

Thanks for visiting my web site. While you are here, I invite you to look through the other pages. Please feel free to comment  in the area provided on the Contacts page.