Love Letters by A. R. Gurney has been around since 1988. Many stage and screen luminaries have appeared in it, directed it, or been involved in its promotion. Widespread acclaim for the play – a Pulitzer Prize nominee – surely is due, almost exclusively, to the story line. The play follows Andrew Makepeace Ladd, III and Melissa Gardner, two rich kids born to privilege, throughout their lives and the audience learns of their romance, respective marriages, and career twists and turns through letters they have written one another over the decades. The play ends with Melissa’s death. Audiences find it moving. Death usually is. The death of a loved one all the more. Andrew is abject with the realization that he has loved her all along.

Actors love it because they do not need to memorize lines or blocking. They remain seated throughout, reading from the script, and that’s where the trouble begins. Both characters have kept letters they received from the other, kept them since childhood, kept them through hospitalizations, marriages, deaths in the family – you name it, both of them kept everything. Maybe not a major premise, but a shaky one certainly, and audiences give it pass quite easily. But Gurney asks more.

The play begins. Andy and Melissa start reading letters. Andrew reads letters he wrote to Melissa’s and vice versa. But hold it! It would not work that way in real life. Logic would have Andrew reading letters he received from Melissa. Not those he wrote. His letters would be among Melissa’s mementos. He wouldn’t have them in his possession. But he reads them anyway. No matter, the audience buys in, probably because they haven’t time to think through what makes no sense at all. Or maybe they think that each character is hearing the other in the way the letter is written. So Andrew is the voice in Melissa’s head as she reads, in other words, and Melissa the voice in Andrews.

Gurney himself admonishes actors that there should be no baby talk. When Melissa reads Andrew’s fifth grade note asking her to be his valentine, she hears as it is being read by Andrew as a grown man. The decision confronting the director and cast is how the voice is to be heard in the mind of the recipient. The time of the play is the time the letters are read; not the time they were written. The language in the letter, however, remains the language of the character the age the letter was written. Each focuses on interests and events common to the given stage in their life at the time, yet the voice is that of an older adult. The audience presumably is transported to the mind of recipient. But is it? If it were, the reading would be colored by the memory and feelings of the recipients. What the audience gets are the emotions of writer, not the reader. Confused? It’s usually enough to ask an audience to suspend disbelief. Gurney asks it to abandon their commonsense.

In short, this convoluted artifice puts the letters back in the hands of the author with a voice that is not the voice in the mind of the recipient but read in real time as Gurney directs, “as older people.” Little wonder that Gurney’s notes are tossed out at this point and directors decide to let the show unfold as it will. The playwright hasn’t thought things through. The trick is to keep the audience engaged in spite of everything. Somehow it works, although only because the action moves so quickly that audience members do not have time to think.

Gurney got it backwards. He should have let Andrew read the letters he received from Melissa and Melissa do the same with Andrew’s. The letters should be with the person who received them. The audience would see and hear the recipient’s reactions as readers moved into reverie and the emotions as events are being recalled. There would be no problem with the time frame then. All would be in the present. A director might attempt this but it completely violates the script. It amounts to a total reversal in the assignment of lines. Just the same, it’d be one hell of a play if done that way.

Gurney writes “Trust what I have wrote, perform it as written, and all will go well.” Sorry A. R. While it is true that the drama keeps moving forward despite serious flaws in its premise, there’s lots and lots of trouble in the script. Experienced actors have a practiced default manner of reading anything. It’s their cruise control, a disciplined pacing and cadence that allows the actor to look ahead a phrase or two at a time so he or she can veer at the last moment to avoid trouble and make sense out of things. Cruise control is for freeway driving. Gurney’s script is a twisting, back country trail pocked with potholes. Veer away from one and the actor will slam into a second jarring washout. The most accomplished, agile first-time readers will trip up. Absolutely.

Trashing his own convention . . .

Furthermore, as soon as actors catch on to the rhythm of the correspondence and the back and forth exchange at least mimics reality, the action heats up, and Gurney lets his convention of exchanging letters disintegrate into dialogue. Never mind that the correspondents may be continents apart, they snap at each other in rapid fire that completely destroys any illusion they are communicating in writing. A better playwright would have had the characters meet somewhere or at least on the telephone for the emotionally charged exchanges. This is gimmickry. Gurney trashes his own convention. 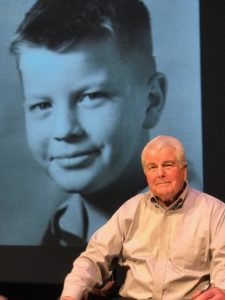 Author on the
Love Letter Set

As for trusting what is written, actors will be challenged by Gurney’s run-on sentences, clumsy syntax, and an affection for cliches. His characters are not eloquent. Andrew, who prides himself in his writing and writes all o f his life, as a man established in his profession retains the hand of a 9h grader when he writes in his climatic, closing speech, “I don’t think there are many men in this world who have had the benefit of such a friendship with such a woman.” Really? Such a sentence! This from a guy who made the Harvard Review. Or mix a metaphor now and then and throw in a cliche.. “I guess what I was really saying as far as my family is concerned, we’re all managing to hold our heads above water in this tricky world.”    Again, that awkward tangled statement belongs to Andrew. Then there is the oxymoron in the line he pens as if blurting it, about Melissa death “. . . fills me with an emptiness.” The passage isn’t a rhapsodic contrast of opposites to make a point poetically. There’s no evidence anywhere in the script that either Andrew or Gurney are capable of the poetic. This is just damn poor writing.

Then, as if Gurney isn’t sure audiences will get his message, he has Melissa, a wildly imaginative artist, throw out the bromide, “Keep your eye on the ball.” To which Andrew, somehow incapable of catching her drift, is forced to ask, “What ball?” – easily the most vapid line in all contemporary drama and perhaps the most challenging because of it. Melissa then expounds, ah such wisdom from her suffering, that money isn’t everything. If Gurney had any confidence in his writing, he should have recognized he has made his point many times over. What he lacks is confidence in his audiences, and the exchange in question is an insult to their intelligence.

Love Letters in the end is a lazy playwright’s product. Why worry about staging or challenging a director over lighting and set design? Or challenging the actors with emotionally charged confrontations. Even his allusions to the Land of Oz make no sense. At times they mean the years when the characters were young and innocent and full of hope. At other times, Melissa returns to Oz which stands for her receding into her mental illness and addiction problems. At another point, Melissa refers to their early life in Out Town (Yes, it’s capitalized in the script.).Oh, wow, A. R. read Thornton Wilder. No symbolism here. No point in trying to makes sense out of it.

Given everything, Gurney seems to suggest that actors need not study their lines too assiduously, that his play is a walk-over, a sure ringer. There have been disasters for some unwary professionals who took him at his word and found they were not prepared for the awkwardness of his phrasing and dodgy syntax. He discredits his own work in these statements. The key to the understanding and depth of both characters are embedded in the script in surprisingly thoughtful and insightful ways. Much of the humor is in the exchanges between the two characters. It lurks in the timing and a change in tone, difficult as both are to maintain in a sense that everything is a correspondence. A couple of read-throughs will not do it. The characters make the play. They, ultimately, keep his script afloat despite all the playwrights gimmicks and refusal to create a structure that demonstrates a command of the art form. It’s all very dramatic without being drama at all.

Thanks for visiting my web site. While you are here, I invite you to look through my many previous posts. Also, if you feel so inclined, please comment on this article or any other in the area provided below.