Losing a pet is painful. I had to give up my dog Jessie. She had lost control of her bowels. We never had any problems during the six years she lived with us as an inside dog. We did not know anything about her history, however, because she was a rescue. The veterinarian estimated her age at two years when we first brought her home, making her almost nine when the trouble developed — rather young given everything. After working with her for weeks and consulting the veterinarian, it became clear that Jessie’s best chance at  living out her natural life might mean moving her to another home.

The vet found nothing physically wrong with Jessie. Two changes had taken place in our home, however, that may have created difficulty. We changed residences. We live the winter months on the Atlantic coast and the summer in the Blue Ridge Mountains. Jessie, as a younger dog, took the change in stride every year until the most recently. In March 2014, we brought a second dog home — Buddy, a 15 month old rambunctious Pappillon. The dogs took to one another right of the bat. They played together. We walked them together. For two-and-a-half months, at the coast and in the mountains, neither animal exhibited any health or behavioral problems  We left them loose in the home together for hours without any concern. Then the trouble began.

At first we thought the problem was behavioral, that Jessie was protesting Buddy’s presence in the home. We ruled it out, however, realizing we would have seen trouble weeks earlier. Everything we read cautioned against interpreting Jessie’s behavior in human terms as if she was acting out resentment or protest. Buddy, meanwhile, following Jessie’s lead, regressed and began having problems also. We separated the two animals. Buddy retrained quickly. Jessie, however, did not. She defecated one time when I was carrying her. On another time, she was in mid stride on a leash. Her actions appeared involuntary. Losing a pet  Losing a pet. Losing a pet. Losing a pet.

Jessie has always been an inside dog. I tried for weeks to keep her on a leash, put her in her crate every time we left the house, and she still had accidents. I lavished affection on her in the hope that, if the origin of her trouble was behavioral, my attention would make it go away. Nothing changed. Even Jessie grew stressed

Friends suggesting giving up Buddy, but Buddy was not the problem. He was healthy. Jessie’s problems seemed to be physical, perhaps neurological, rather than behavioral. Given even a slight chance they were behavioral, our vet suggested a change in homes might be the remedy. If they were physical, a home that kept her as an outside pet would enable her to live out her days. The latter was impossible for us. We did not have a fenced yard at one address and were prohibited by the homeowners’ association from constructing one at the other. Losing a pet.

We decided to leave Jessie at a kennel that would advertize her availability. She was adopted by a a rural family who can let her run free. Knowing that she has a good shot at living out her normal life  is very gratifying. It did little, however, to ease the pain for parting with her. 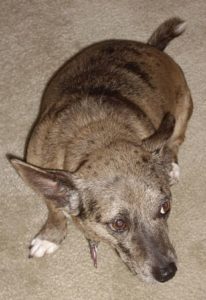 I  experienced the grief over parting with her as a deep emptiness. It felt lodged in my solar plexus, a gut like a craving. There was nothing with me wrong physically. My distress brought on the reminder that life does not always continue as we would like, as we found happy at one time.

Some resist grief because they fear of it. It’s a fear of being swallowed up and never seeing the end of anguish or the pain beyond enduring.  I surrendered to it. I figured the job of grieving is to empty the bucket. Dump it out. An end of sorrow would be reached in time. Jessie was not my first painful loss. Allowing myself to grieve would perhaps shorten the time it takes for the pain to abate. Like a brimming vessel, the sharper the angle at which it is tipped, the quicker it empties. I wanted to reach that state where I could enjoy my memories of her rather than feel a pang of loneliness and loss at the mere mention of her name.

Grief demands patience, however. It cannot be wished away. It reaches a crisis that approaches feeling unendurable, as if there is no bottom to it. Losing Jessie created a hole in my life. My spirit suffered from the withdrawal. I wanted relief from the horrible emptiness and the desperation of wishing I could turn the clock back.

I couldn’t expect everyone to be comfortable with my grief. Melinda and my good friend Joe Frisina were very consoling and great comfort. I knew, however, Jessie was mostly my loss. I wanted to grieve without imposing on others.   I composed a mantra to help me accept the finality of her departure. “Jessie is never coming back,” I said it over and over for days. I took a walk in the meadow Jessie and I strolled through every afternoon, visualizing what it was like to share the experience with her. There was heart ache in nearly every step. I dubbed the field “Jessie’s meadow.” It will be hers to the end of my days. 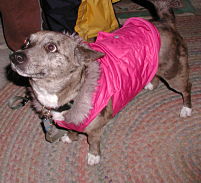 Jessie with Hoodie all set to take a winter walk. A favorite photo.

I imagined Jessie waiting for me in the car as she did when we ran errands together. I’d greet the empty front seat when I opened the door as if she was there. I forced myself to visualize the last time together with her at the kennel when I turned her over to the caretakers. For days, I could not believe I found the strength to give her up, the pet I loved with all my heart, the pet who was part of every day, who napped with me, walked with me, played with me or just rested on the floor by my desk as I wrote. I looked at our last minute together again and again and accepted the pain until finally I could be grateful I had taken a last minute to crouch down beside her, stoke her sweet head, and tell her one final time I loved her.

Over the years, Jessie and I learned to connect with each other. She’d look up at me when we were on a walk as if to ask, “What do you think? Should we turn back?” Or sometimes, bounding into my den and jumping uninvited onto my chest as I was pushed back in my recliner, she’d search my eyes with the question, “Can we play now?” As I passed by her cage retiring at night, she’d often open one eye as she nestled in her blanket and look at me as if to say, “Just keep moving, old man. I’m tired.” In the car, turning into our neighborhood, she’d  sit up, look about, and turn to me as if to say, “We’re home, aren’t we?”

Jessie barked at my return every day, often turning to go back into the house to make sure that my wife also knew I had arrived. She would put her paw on my hand to hold it in place as she pet me with her tongue. She would rest her head on my side when we napped with a look of pure contentment on her face. 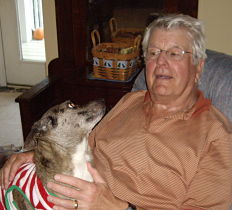 Jessie with Author. That’s a connection.

I may be guilty of some level of anthropomorphizing. I don’t care. What I experienced with Jessie was real. I may not have read her looks and vocalizations exactly as she intended, but she was making an effort to communicate, and I knew it.  Her looks, her barks and whimpers were not the random unintelligible utterances of a dumb beast. They were informed by her feelings and carried out with all the canine resources available to her. 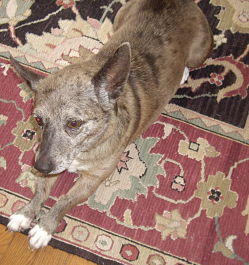 We go from day to day as if life has no end. A loss reminds us that we cannot control everything that happens to us, even keeping those we love close to us. When I gave up Jessie, a major change had taken place in my life. A chapter was over, one that cannot be recreated ever again. I recognize the need to move on for I have many in my life  who love me and many I love in return. I want to be open and unencumbered to whatever destiny still holds in store for me.

Grief eventually ebbs. Weeks have passed. I still have moments of piercing sadness. My love for Jessie remains harbored deeply within me. It takes the shape of a graceful spirit, a life within my life. I will hold it dear always and take joy in recalling the happier times she and I shared with one another.

I plan at least one mare article about Jessie. Please watch for it.

If you have enjoyed this article, I invite you to look through the other pages of my web site and leave a comment in the area provided below. My book, Deadly Portfolio: A  Killing in Hedge Funds,  is available in all ebook versions and on Kindle at Amazon who also carry the paperback version. Watch for my next novel, a sequel entitled Breached. It will be released sometime in August, 2014