Nina Weise is 20, beautiful, intelligent, and connected. On summer break, she travels to California to work with her cousin Elaine, a publicist for some of the brightest stars in cinema. Elaine’s father runs Lumina Studio.   Gay and Lesbian

Elaine assigns Nina to handle publicity for Stella Kane, a stunning beauty and rising star. Nina is a quick study in handling logistically tricky promotions and narcissistic Hollywood personalities. The skills she honed as a young girl among the wealthiest families in New England serve her well. Gay and Lesbian

In 1948, Hollywood is struggling. Television is cutting into box office receipts. The paranoia grips the county over communists infiltrating all levels of  society including the film industry. The contagion will vault Senator Joseph McCarthy into prominence in a final spasm to a shameful chapter in the nation’s history. A resurgence of moral righteousness fuels vigorous film censorship. All sex is taboo. Married couples cannot be shown sleeping in the same bed. The word “pregnant” cannot be spoken on screen.

Homosexuality is anathema, of course. It is condemned as a perversion. The film industry, like all the arts, flourishes because of the contributions made by gay men and lesbian women. In this era of repression, however, homosexuality is never discussed. Coming out or being accused ends a career. Some of the best and the brightest are forced to live double lives. “It will always be this way,” Hollie said, “This is one thing people won’t accept.” Gay and Lesbian

In the middle of it all, Nina finds herself intrigued with her client, the enigmatic, beautiful Stella. Nina refuses to acknowledge her own stirrings. But Stella knows what’s going on even if Nina doesn’t. Stella knows she can wait. 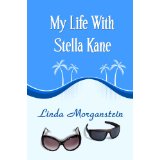 Book cover: “My Life with Stella Kane” as shown on Amazon

The summer ends. Nina returns to New York where she meets art critic, Sue Edelman. Edelman patiently coaxes Nina to examine her impulses and yearnings, and Nina acknowledges her attraction to Stella. “She’s complicated and impossible. She’s beautiful and unpredictable and unfathomable, and you never know when she’s real and when she’s acting,” Nina complains. Readers may find Nina’s exasperation understandable. Author Morganstein gives us very little background on the gorgeous movie star. Readers are not privy to her thoughts.

Upon graduating from Barnard College, Nina leaves Edelman and New York and returns to California, teams with Elaine again, and reassigned to work with Stella.

The real Stella eventually emerges. Traveling in Ohio, Stella’s home state, Nina witnesses an encounter between Stella and her stepfather, a man with the last name of Kubicek. The scene is one of the most powerful in the book.

Kubicek turned to Nina  again, ”Watch your step with her. She can’t control it, she can’t love it,”

“What do you know about love?” Stella spat out.

“Who’s gonna love her?” Kubicek taunted. “Who’s not just getting snared up in her? But that’s okay. She’ll take care of everything.”

Stella shouts at the old man to stop and covers her ears to keep from hearing him. This glimpse of the real Stella stuns Nina who, moved by what she has seen, lets her affections for Stella surge. Stella’s reaction to her stepfather moves Nina, not what the old man says.

Morganstein’s deliberate ambiguity in the old man’s rant is intriguing. The impact his words have on Stella is clear, however. She is suddenly more vulnerable than Nina.  have seen. Morganstein uses the least articulate of her characters to provide a very critical insight into Stella. As with so many other situations in the book, readers are left with a haunting uncertainty.  Gay and Lesbian

Nina comes away from the scene loving the real Stella she has finally seen. She devotes herself to the star. That devotion carries through when Nina, as publicist, is called upon to promote Stella and male star, Hollister “Hollie” Carter, as the romantic couple of the season. The hype is to promote the movies the couple is making. When their public relationship culminates in a marriage, an extravaganza staged with stand-in extras playing family roles, the cover for both stars becomes more secure. Nina moves in with them. Hollie is cool with all of it because he now has cover for his boyfriends.

The scurrying about to avoid discovery, the late night calls, rescue trips to the precinct station, exchanged confidences at cocktail parties, and threats against reporters could have a comic dimension except it is all deadly serious. One rumor, to underscore the point, results in the suicide of Sybil Croft, a close friend of Stella’s and an actress in the middle of a successful career. Getting by from day to day requires presenting one persona to the public and reserving the real self for the intimacy of private life. Stella and Hollie survive by manipulation. The risk, of course, is that the line between the public and the private self becomes blurred. Manipulation creeps into all relationships. Authenticity may finally lose its role in centering the true self, staying in touch with it, and nurturing it.

The story benefits nothing from the self-indulgent prologue in which Nina proclaims she is a lesbian, a laugher if the narrator were a guy pronouncing himself  gay, and hardly in character for the sophisticated Nina as depicted in the story. If readers were not so needlessly alerted, they would be more engaged as Nina deals with her sexual awakening and yearnings. It also  introduces another uncertainty. Who is the author of the prologue. The story is Nina’s to tell. The novel itself, however, is not a first person narrative.

An Epidemic of Manipulation . . .

The last line in the book, “OR WOULD YOU?” asks readers to reconsider whether the epidemic of manipulation, blackmail, lies, entrapment, and rumors that were a part of surviving in mid-Century Hollywood have cynically permeated all the relationships and the story itself is a hoax, a grand prank on the reader. Credibility is put at risk for the sake of introducing a final irony that is oddly consistent with the story; namely that the reader, like the characters, really can’t trust anyone in the glamorous world of movie-making including the narrator. It’s the old dilemma, “Everything I tell you is a lie, including this statement.” The book would be better with the line struck. Unless, of course, the narrator is ducking into hiding herself.

Readers should be resolved to cope with the vagaries of why the characters behave as they do. The book is a great read. Morganstein is a master. She packs more into one sentence than most writers can put into a full paragraph. One minor character she describes as, “Walter was perpetually mystified by his own anonymity.” With such nimble command, readers may wonder why so little is revealed about the major characters. My Life with Stella Kane is a joy to read, however. Morganstein knows her Hollywood and spreads tinsel town out for very enjoyable viewing.

This review was initially published somewhat condensed in www.bookpleasures.com.

If you have enjoyed this article, I invite you to page through the rest of my web site and urge you to comments if you feel so inclined in the space provided below. My novel, Deadly Portfolio: A Killing in Hedge Funds, is available in paperback and  Kindle version through Amazon. It is also available in all ebook formats. Watch for Breached, my next novel due out in August, 2014