On the Same Page Literary Festival in West Jefferson, NC, concluded Saturday, September 29th after a session in the Jefferson County Library during which the finalists in the festival poetry, non-fiction and fiction contests read their pieces. I was very pleased that my entry in the poetry contest was awarded first place, even more so when I heard the others read their winning entries. The honor above all was to be included in a group of other talented writers.  If asked, I probably would have volunteered that I thought my piece was too simple to do very well. It won out over more than 100 entries from all over the Southeast.

Some poems come to me in a spontaneous rush. This one did. I was seated at the dinning room table in our cottage in Southport, NC. I had just finished my breakfast which I eat rather late in the morning given the time that I get up to start my day. Rising around 6:20 a.m. every morning, Melinda and I take our dog Buddy for a walk. Then I spend up to forty-five minutes on the computer catching up with correspondence, my web site and notices before I head off for the gym and my workout. So it’s 9:00 a.m. or later by the time I sit down to my oatmeal and toast. 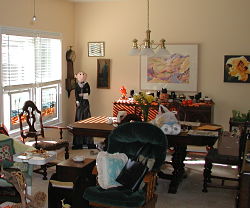 The Dining Room Suite in Our Cottage. That’s Hudson, the Butler in the corner

The dining room furniture in our cottage is from my boyhood home. Actually it is from my mother’s home from when she was a girl in Armour, SD. She loved telling how she rescued it from the family home when her father died and left the property to be sold. As a boy, I crawled underneath the table and buffet (sideboard) as I played with my toy trucks and cars. I have another poem in the works about the dining room furniture. Regrettably, it is not one that wants to come to mind as spontaneously.

I moved all the pieces of the dining room suite from Yankton, SD, to our home in Winston-Salem, NC, when my mother died in 1985. I treasure the ensemble. When we decided to move so that we could accommodate Melinda’s mother as part of the household, I had all the pieces professionally refinished and reupholstered. It looks almost like new at the present time. The memories, however, go way  back, more than half a century.

On the morning that the poem came to me I had finished my breakfast and was taking a few moments to sit and listen. The morning sun was streaming in the window. It felt like a timeless moment, or what I call an eternal moment because it was so peaceful. The house was quiet.

Anyway, here is the poem.

I thought this quiet in the house
Was part of her –
Something she created,
As she moved from room to room,
Straightening the knitted afghan
On the red frieze davenport
With arms worn threadbare
From my father’s shoes
As he napped for twenty minutes
Each weekday noon.

Or stooping to pick up a magazine
That had slipped from its casual perch
On the broad arm of the brown easy chair,
And lay spine up on the beige carpet
Like a vacant paper tent on a desert floor.

Or paging through the thin gray telephone directory
For the number of the pretty young woman she met
Earlier in the week at the altar society meeting
So that she could just say “Hello.”

I thought it was part of her
But here it is in a place
She can no longer reach
It hovers over the same simple tasks
As the day first strikes its morning stride
And the house is empty
Except for me.

If it is of interest to other writers, I did change the ending when I came back to the poem some time after I first composed it. The ending had another line at the end. It read: “And I am alone.” To this day, I am somewhat ambivalent about removing the line. I believe in brevity. Poetry needs to be economical. I let that criterion have the final say. To write, “And I am alone,” would have been redundant. It seems better to let the reader realize that the poet was solitary. Everything in poem evokes a sense of quiet and solitude.

The On the Same Page Literary Festival is quite an undertaking for a small town like West Jefferson, population less than 4,000. The festival lasts three full days with a book fair, luncheons, readings, and workshops. Jane Lonon, chair of the Ashe County Arts Council, and here committee are to be commended on the entire program.

Thanks for visiting my web site. I invite you to look through the other pages while you are here. Please feel free to make a comment in the area below. My novel, Deadly Portfolio: A Killing in Hedge Funds, is on sale at Amazon.com in both paperback and Kindle versions. It is available in all eBook forms and can be purchased at online booksellers for $1.99. The sequel to Deadly Portfolio is entitled Breached will be released in October, 2014. Watch for it.