Immortality! What a concept. Nothing lasts forever, of course. Even the sun will change in four billion years, become a red giant and expand to incinerate Mercury, Venus and probably Earth. Earth, if it survives, will be uninhabitable.

Four billion years, then. At this point in the history of our solar system, that is as good as forever. 3.99998 billion years from now, if anyone is still walking the planet, he or she will be looking at things differently. But we are a long way from that. In fact, most of the time, most of us do not give much thought to the end of things, be it our individual lives, the welfare of our country, or the continuation of an ecological balance that enables and promotes life in profusion.

Perhaps it takes an event of some gravity to move us consider the end of life. Last month, while walking our dog Buddy, I turned toward home and began trudging up a long hill. About half of the way up the grade, my chest began to cramp painfully. My breath came in short gasps. Inching forward became a deliberate effort. Buddy looked at me as if to ponder why we were going so slowly. A heart attack? I wondered. At one point, I didn’t think I would make it the last three blocks to home. I had my cell phone on my belt and thought of calling 911.

I’m on Walker Avenue between Collingwood and Magnolia. I think I’m having a heart attack. I’m with my dog. You’ll have to get him home first, I imagined myself saying to whoever answered my call. The dog! Of course. I needed to call my wife to come get him. Maybe she could take me to the emergency room. 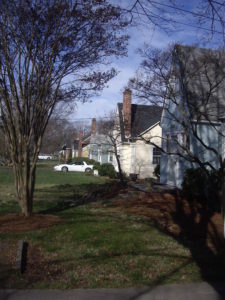 From the Author’s Front Yard

The taxes! I thought, taking another hesitant baby step. Melinda will need to finish the taxes. For some reason that became unthinkable to me. Melinda has an MBA. She’s more than capable. But I found I was spurred on by the thought of leaving that dreary task behind for her to complete. I finally reached our front door.

“I’m having chest pains,” I panted.

“Do you want me to take you to the hospital?”

“Just let me sit for a minute.”

“Do you want an aspirin?” Melinda is wonderful  She was alarmed but unshaken. She is my rock, the center of my life.

“Yes. I don’t think it’s a heart attack but just in case.” (A serious mistake as later tests proved I was on the brink of a heart attack.) In a few minutes I was feeling better. Acid reflux, I reasoned. I experienced a milder episode a week or so earlier. I had discussed it with my doctor. The belching, the absence of any radiating pain up my neck and into my jaw, the fact that the symptoms went away quickly – everything pointed to bad gate-keeping between my stomach and my esophagus. The cardiac sphincter asleep at its post. But, back to my point.

My mind protected me from contending with the fear of dying, just as it does every day. I wasn’t ready to think about death, heart attack or not, even though I might have collapsed in a writhing heap with my next step. None of us thinks about it, or as one author put it, “We can’t think about it for long without going crazy.” Every one of us is far too important to die. The things we do each day are too vital, too important. Eric Berne wrote that we structure our time to avoid thinking about our mortality, sometimes to the extent of setting up elaborate and destructive games to occupy our minds and hearts. We use religion to take the edge off of death. Life in the hereafter is glorious beyond belief, or rather, as a matter of belief. Some who have reported near-death experiences testify that passage from this life to the next, at least at the  onset, is peacefully  mysterious, but none ventured into the hereafter deeply enough to send back detailed reports of its sumptuousness and grandeur. My guess is that any form of an after-life will not resemble life on earth in any detail. A thousand virgins are not milling about in the foyer.

It seems, if anything, that as a race we over-reach ourselves, not so much with our science, but with our desire to become more than mammals with amazing but limited intelligence. Human knowledge goes beyond anything dreamed possible even half a century ago. Our knowledge increases exponentially every decade – curiously an argument used by some theologians to prove that knowledge leads nowhere. Not that it ever made pretense at doing so, but science has yet to prove that God exists, or as the theologians fear, does not.

Knowledge on the other hand, especially in science, threatens to dispel the basic myths in man’s religious systems, and the religions of the world put up a formidable defense by insisting what must be believed as dogma over and above what can observed and proved. Science grows, whereas our belief systems stagnate, even as their moral guidelines change. The tenets of faith are reinterpreted but rarely dismissed as false and in need of redefinition. Fine tuning of the incidentals is acceptable from time to time. It’s true, for example, that St. Christopher was not a saint even though for decades invoking his name saved countless travelers from harm. Even the Catholics have found a way to undo til-death-do-us-part marriage. The doctrine of the assumption of the Blessed Virgin, papal infallibility, the virgin birth did not come from the mouth of Jesus, but put forth centuries after His death.

The cultural lag created by religions in areas like the acceptance of homosexuality, birth control, equality among the races and the sanctity of marriage all too frequently fosters intolerance and creates strife and suffering.

It seems to me that humble acceptance of man’s undeniable ignorance and a discipline of honest doubt inspires greater awe and reverence for the Divine than anything most religions insist upon as true. Accepting that we are ignorant is the beginning not only of wisdom but of devotion. As we add to our myths – the Assumption, the Ascension, Papal infallibility, apparitions and appearances of saints – we move away from that part of our nature that experiences wonder and awe and pander to our need for certainty. Beliefs shape perception. Man seems to love the knowledge he created of God more than the Godhead itself.

We need to live within ourselves as our fellow creatures do, accepting our limitations; playing, as the saying goes, within ourselves and letting the game of life come to us. The fantastic stretching to claim we are created in the image and likeness of God, the horrible pretense that we are special children of a Heavenly Father, often proves destructive in the end. What we lack is true humility, a willingness to accept how both wonderful and limited we are as beings. We need to learn to love ourselves for who and what we really are and let the supernatural take shape in our minds and hearts as something largely unknowable, possibly beyond anything we can experience. Religions too often seek to create certainty where none exists. A better goal would be to promote wonder and doubt. 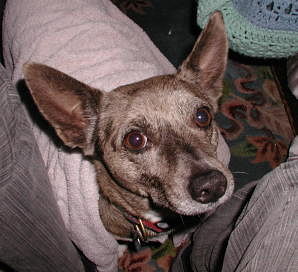 Jessie. Her eyes Bespeak an Undeniable Intelligence at the Canine Level

Jessie, my dog, had almost no knowledge of what it is to live as a human. Yet she loved me with her entire canine nature. Her ignorance did not limit her love for me. The supernatural exists independent of man’s knowledge of it. It, They, Whatever, don’t need us to sustain their existence, any more than mankind is sustained because our pets love us. Nothing we believe will change what happens in life or death. Belief changes only how we react to events, how we perceive them in the first place. Inscrutable destiny, the fate of the ancients, makes more sense than asserting “everything happens for a reason.” Things happen as a matter of cause and effect, but that’s it. If we look for the hand of God in what occurs around us, then we need to admit all of human experience into the equation including the tsunamis, the earthquakes, the urban riots, the holocaust – the list is endless.

We need to acknowledge our yearning, not explain it away. The capacity for faith is reduced when knowledge and beliefs are dumped into it. Faith accepts that the reason for man’s existence is beyond his comprehension at this time in his history. Faith can be a void, standing empty as a bowl on a table. It senses its own capacity as a starving man endures pangs of hunger. We can love without knowing. We can love in almost total ignorance because we see, hear, breathe and feel the wonder of life within and around us each day. We can love the source of all life, of all created things.

Nature has done amazing things within us. Consider the heart of man. Nature formed this complex and wonderful organ out of blind, unrelenting desire to thrive. The heart is so exquisite and complex that we want to  call it a work of the Divine. The same can be said for all the organs of the body. We want to believe a Deity of some sort lives within nature. Yet nature is extravagant. It fails almost as often as it succeeds. Why cancer? Why cholesterol to clog the circulatory system? Why insanity? The ignorant, sometimes aimless drive to prevail, often creates forces destructive to its own flourishing. The attraction to life, the immutable, undeniable urge to thrive, lives within everyone whether heeded or not.

Awe is not a matter of how things happen but that they happen at all.