Penguin Books is promoting the paperback version of the classic Washington Irving: The Legend of Sleepy Hollow and Other Stories intimating during this Halloween season that it could be almost companion piece to the currently popular animated television program Sleepy Hollow appearing currently on FOX network stations. Hopefully, that doesn’t present anyone with a problem. Any ploy that calls readers to consider one the America’s greatest literary treasures can be justified by the ends it seeks. Make no mistake, however, the Penguin Classic is more at home in a graduate student’s backpack than on a bedside table as a volume to read to the kiddies as they tumble off to sleep. For anyone inclined to look, this nifty little paperback contains no illustrations. The formatting is exquisite but the smaller font size would strike the casual reader as formidable, creating a very serious impression indeed.

The notes by scholar Elizabeth L. Bradley make the case that Irving as an author has been somewhat abused by popular media and academics alike. Bradley insists that Irving’s true place in American literary history is neither to “. . . put him in the exalted league with James Fennimore Cooper and William Cullen Bryant . . .Nor does it improve matters to insist that every American has absorbed Irvin’s stories like plants do sunlight – through their depiction in television shows, movies and even video games.” Irving, revered as he is, occupies a middle rank of unique and monumental standing. Scholars may see him as the first American author to achieve international recognition, a feat all the more impressive because he is neither novelist nor poet. Contemporary indie writers can take heart because he began at his own risk with a publisher “. . . unknown to fame.” The average reader, regrettably, will identify Irving with the iconic, if not comic, Ichabod Crane and the Headless Horseman. 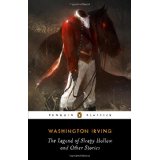 The Legend of Sleepy Hollow and Other Stories

The scholars can have their day. The average reader’s interests might have been served with a little less academic approach than Professor Bradley presents. If the effort is to popularize an author, perhaps a more down to earth vocabulary would be more effective. It’s hardly middle school fare to come across a sentence like:

“The Sketch Book was published serially from 1819 to 1820, but the collection still serves as a handy metonym for his entire oeuvre.”

(Sent this reader scrambling through two dictionaries, but then I don’t have a graduate degree.) There’s nothing wrong with expanding one’s horizons. But it is important for promoters to know their target market. What’ll it be? The campus or daycare? Looks like Penguin is trying to keep the book in both settings. The solution may well be that readers are best advised to read the entire text of Irving’s writings before undertaking Bradley’s introduction. The allusions to the various Sketches otherwise carry very little meaning.

But for the meat of the book – Irving himself. In a word, delightful. The writer’s easy prose, so flowing, so relaxed, is a joy to read. Readers feel the man holding the pen. There is almost a fragrance exuding from his compositions.

Readers stand at the rail with Irving as he recounts what it was like to depart American shores for Europe – an experience denied air travelers. He writes:

As I saw the last blue line of my native land fade away like a cloud in the horizon, it seemed as if I had closed one volume of the world and its concerns, and had time for meditation before I opened another. That land too, now vanishing form my view; which contained all that was most dear to me in life; what vicissitudes might occur in it – what changes might take please in me, before I should visit it again.

The description of Ichabod himself reads:

He was tall, but exceedingly lank, narrow shoulders, long arms and legs, hands that dangled a mile out of his sleeves, feet that might have served for shovels
. . . To see him striding along the profile of a hill on a windy day, with his clothes bagging and fluttering about him, one might have mistaken him for the genius of famine descending upon the earth . …”

There’s a picture a five-year-old can draw into mind and yet be intrigued by a word or two yet beyond a preschool vocabulary.

Any effort to perpetuate Irving’s stature as a pioneer American man-of-letters deserves applause. This Penguin Classic handsomely serves in the role. Most of the Sketches are for dedicated seasoned readers. Irving is not served by putting him and his works on the same plane as Rudolph the Red Nose Reindeer or Frosty the Snowman. As an author, he has too much to say about his times, human nature, and the enduring questions that life presents to men of every age. Readers should not expect to find arcane language and grammatical construction. Irving is as readable today and every bit as entertaining as he was at the time he wrote. This little book is a beautiful collection and tribute to his genius.

A somewhat shorter version of this review was initially published in bookpleasures.com

Thanks for visiting my web site. While you are here, I invite you to look through the pages and make yourself at home. My latest novel, Breached,  is no;w available in all ebook formats. Ask your local dealer to order it for you or but on line.