My Fair Lady, the musical, has been around for years. Several of its songs have become standards. The iconic cast of the 1964 film featuring Rex Harrison, Audrey Hepburn, Wilfred Hyde-White and Stanley Holloway spring to mind as the standard against which all other performances should be measured. Richard Rose, Artistic Director, demonstrated tremendous confidence in his own company to present the musical, currently playing at The Barter. To succeed, his cast and crew must move its audience away from the ossified half-century mindset and applaud a fresh, invigorated presentation of what Lerner and Lowe envisioned in creating their classic. Rose’s confidence has been rewarded. The staging of My Fair Lady is a tumultuous, uproarious, and eloquent success, easily among the Barter’s finest productions of the last thirty years – the period of time this reviewer has been attending their shows.

To meet the challenge of banishing audience preconceptions, Director John R. Briggs needed overcome the limitations of the somewhat smallish proscenium stage. Choreographer Amanda Aldridge and Dance Captain Hannah Ingram are the power behind Briggs’ efforts. Together they blow away all the physical constraints with dance numbers that all but vault over the heads of the enthralled audience. The dancing is crisp, jubilant and great fun.

Howard Tsvi Kaplan’s costuming, especially in the dances, explodes with color, making every scene larger than life, an exuberance of skirts, petticoats and bloomers. And for contrast, the actors in the tent scene at Ascot are impeccably posed in formal garb. The play brims with energy and draws the audience into the performance, letting them get joyfully lost in the space on stage, an involvement masterfully sustained by Daniel Ettinger’s sets.

My Fair Lady cast members can sing! Holly Williams, as Eliza Doolittle, brings a sterling clear voice with the strength that convinces listeners that Eliza is, from beginning to end, a powerful woman. She is thoroughly believable. The top of her range is operatic in power and resonance. Rick McVey’s big earthy baritone, whether singing or speaking, is a wonderful match with Eliza. Nick Koesters, as Alfred Doolittle, brings so much energy to “With a Little Bit of Luck” and “Get Me to the Church on Time,” that both numbers become show stoppers. Koesters is as good as can be seen anywhere. Koesters, Zacchaeus Kimbrell and Andrew Hampton Livingston, as a trio in “Little Bit of Luck,” blend exquisitely. The auditorium reverberates with their harmony. Justin Tyler-Lewis is a perfect Freddy. He looks the part and his version of “On the Street Where You Live,” is fresh and convincing, to be appreciated especially given the number of schmaltzy renderings by popular artist over the years. 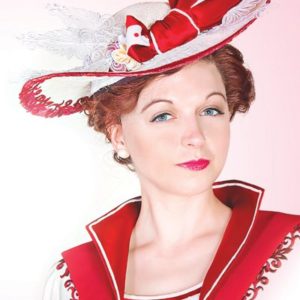 Holly Williams as Eliza in My Fair Lady

Director Briggs never forgets that the concept to the play is anything but frivolous. Eliza’s growth from a flower girl eking out a living in the dingy London slums to an elegant, beautiful maiden and the toast to London society is a huge transformation, but only of appearances. Briggs could assume his audience would be full of grey-haired Buick owners who want to be taken in by something breezy and light. George Bernard Shaw, however, wrote the play in part as a satire of the pompous social values of the middle-class and the wealthy. Shaw’s satire with his insistence on the primacy of the human soul remain sturdily in place. Briggs did not allow it to get lost.

Holly Williams turns in a memorable performance. She lovable with a dirty face and adorable all cleaned up. Rich McVey, in what must be one of his best roles ever as Henry Higgins, is a commanding presence. McVey plays the role; not the audience. Higgins’ arrogance is great fodder for humor, but McVey shrewdly gives us the paradox; i.e. that the shallow man has a great deal of depth. McVey’s performance is flawless, both intricate and broad. Intricate in that he pays scrupulous attention to Higgins’ mannerisms and habits; broad, in that Higgins is staunchly self-absorbed and impervious to the reactions of others. Higgins hardly comes off as lovable, yet the audience believes, as Eliza does, that he is – despite how impossible he may be from day to day. As Williams gives us Eliza with a soul, McVey matches her in giving us Higgins without a heart. 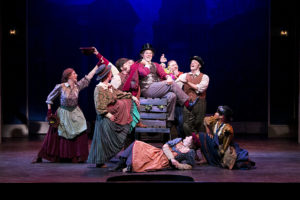 Nick Koesters is a show in himself. His performance with the cast in “Get Me to the Church on Time” is easily one of the best numbers anyone can hope to see anywhere. He is a joy to watch. He sweeps the audience away, brings them to their feet and has them cheering him on. His portrayal of Alfred Doolittle is a new benchmark, perhaps one beyond surpassing.

Michael Poisson . . . har . . . har . . . har  . . . is perfect as Colonel Pickering. Always reliable, Poisson ably fills the middle ground between the pompous Higgins and distressed Eliza. Pickering’s care and concern for Eliza becomes the model for her of what is appropriate and reasonable to expect. As a foil to Higgins, Pickering approximates Shaw’s  ideal wealthy man who acts with respect and feeling for others regardless of their station in life.

The supporting cast is uniformly excellent. Zacchaeus Kimbrell is a very convincing Harry. Musical Director Lee Harris hopefully realizes a good portion of the standing ovation is for him and his partner in the pit, Jerry C. Greene. The pair sounds like six times their number. 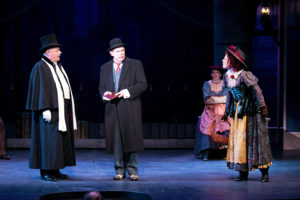 The program notes state that Shaw wanted Eliza and Higgins to go their separate ways at the end of the play. Director Briggs adopts Alan J. Lerner’s ending. Eliza and Higgins come together in the final scene, leaving the audience to speculate about their future together. The Briggs’ choice to use Lerner’s ending is dreadfully unfortunate as it panders to a fading stereotype with Eliza subserviently presenting Higgins with his slippers as the show draws to a close. The play’s message in 1912 was revolutionary and still relevant today, but the final scene harkens back to the 1950’s of Ozzie and Harriet. Eliza transforms herself, for what? To wait on Higgins who never professes love for her and hardly changes at all in the way he acts toward her.

Shaw’s ending is drama;  Lerner’s, cute entertainment. Briggs  could  have struck  middle ground somewhere and at least ditched the  slippers.

My Fair Lady at The Barter Theater is so exhilarating and lush, however, and scores its points so powerfully that the trite last scene will be the first forgotten. The joy of the show will live in the minds of those who see it for days and days afterwards. My Fair Lady is musical theater at its best. Go see it.

If you have enjoyed this article, I invite you to look through the other pages of my web site. Please feel free to enter a comment in the space provided below. My five star novel ,Deadly Portfolio: A Killing in Hedge Funds, is available in paperback and Kindle versions on Amazon. My next mystery, Breached,  is to be released October 7. Thanks for stopping by.