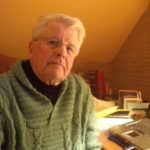 Duryea: The Movies, by Joseph Fusco, is another beautifully produced book by BearManor Media. The publisher presents books that are thoroughly researched and brimming with documentation including news articles, vintage photos and advertizing. Like so many other volumes from BearManor, Duryea: The Movies not only makes for an engaging first read but will serve the cinema aficionado as an excellent reference work that earns its own shelf pace in the viewing room.

The book opens with a brief biography. Duryea was not part of the volatile Hollywood scene at any time during his career. Or as Fusco writes,

The irony of Duryea’s career is that the man who created a roster of scoundrels, connivers, murderers and thieves was actually a mild man who enjoyed a fulfilling home life and a marriage that lasted thirty-six years and produced two sons.

Fusco traces Duryea’s career from the very beginnings with his bit parts in movies produced in the 1930’s, through his rise to stardom and top billing in 1950’s, and the roles in the 1960’s that featured his talents in strong supporting roles. During those years, Duryea appeared with all the legendary greats including Charles Laughton, Edgar G. Robinson, James Stewart, Gregory

Peck, Gary Cooper, James Mason, Jane Russell and Barbara Stanwick, to name only a few. Never memorable for yelling in the streets of New Orleans, as Brando did, or cursing the crew from the helm, as Laughton did, Duryea characterized himself as a “bread and butter” actor. His physical assets included a broadly handsome face, especially winning when he smiled; a distinctive reedy baritone voice, and a physical stature that blended into any scene without upstaging anyone. Fusco cites the actor’s genius lay in his ability to create a wide range of portrayals without ever abandoning his own natural if somewhat limited emotional range as an actor.

Author Fusco divides the book into sections based upon the time period and the prevailing popular themes of the day. Everyone of Duryea’s movies is discussed in the book with a very well written, concise synopsis that includes commentary on all theDuryea: The Movies – Book Cover 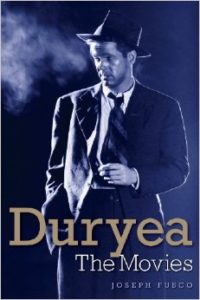 members of the cast and often the director and producer as well. The author delivers a balanced, thoughtful review of each

production. Readers will benefit from recalling the movies as Fusco discusses them. In fact, using the book as a guide to choose

movies on DVD would greatly enhance the viewing experience.

Fusco is an excellent writer and critic. In a paragraph devoted to Peter Lorre to illustrate, the author writes,

He was diminutive, with a reptiles tortured face and eyes that popped with he spoke. . . . In the movie, he is an obscene piece of putty in a tuxedo.

At a time when research is a snap because of the internet, a book like Duryea: The Movies reminds the reader that research need not be a clinical pursuit of the facts but a full and rewarding reading experience; a pleasure in itself, in other words, when presented as thoughtfully and artistically as Joseph Fusco does with BearManor Media publishers.

Thanks for visiting my web site. While you are here, I invite you to look through the other pages or perhaps check on some earlier post. All comments are appreciated. Please use the comment area below. Deadly Portfolio: A Killing in Hedge Funds is currently available in paperback and Kindle. Kindle is just $1.99. Thanks. – John