Detroit was just another city, as far as I knew. Then my boss at the Minneapolis office of The Travelers called me one morning in the fall of 1965 to tell me that I was being transferred to the Motor City.

I ran the two blocks from the bus stop on 50th and Penn to tell my wife the news. It meant a raise. It meant a new home. It meant a ride on a jet plane. My career was underway. That night I went to the public library and looked up everything I could on Detroit. All I remember today is that “Detroit” means “straights” as in connecting waterways, and it had more miles of interstate per capita than another other U. S. City.

Detroit was huge. Downtown seemed to stretch for miles where Minneapolis was only a few blocks long. The company put me up in a downtown motel. My assignment was to find a home for my family, invite my wife to join me once I narrowed down the selection, and then make arrangements to move.

At the time, Detroit was in the middle of the automobile boom. Near full employment meant everybody was in the market to buy a home. My salary was about $5,500 year. Not bad for a guy in only his second year with the company, and I needed place large enough for my wife and me and our five children. Yes, $5,500 would support a family of seven in 1965, not well but the bills got paid.

I felt diminished, almost insignificant, by Detroit’s bigness. “The Battle of the Bulge” was playing in a theater within walking distance. With time on my hands in the evening, I headed out. The broad expanse Michigan Avenue was well lighted and humming with traffic. Yet uneasiness overtook me. There were almost no white faces on the street. Nearly everybody was black. I had never been in the minority in my life. I didn’t like it. A group of teenagers, all African-Americans (a term not in common use in the 1960’s), were laughing and clowning around on the sidewalk in front of me. As they approached, it looked as though they would not make room for me to pass, so I turned into a doorway of a bar and stepped inside. Not one white person in the place. I waited nervously for the youngsters to pass and went back out onto the street.

Detroit was prospering and prosperity brought changes. I was counseled about the neighborhoods that would be better suited for my family: i.e. no blacks. I finally found a place in Detroit proper just two blocks off of Tireman Avenue, the street that formed the boundary between Detroit and Dearborn. Dearborn was nestled under the right arm and shoulder of Detroit. Home of Ford Motor Company, Dearborn, under Mayor Orville L. Hubbard, was a blatantly racist, exclusively white middle class community, something that I discovered only after moving. The homes for sale in the neighborhood I chose were watched closely by the locals for fear the first black family might buy one and move in.

I was not concerned about the racial mix of the neighborhood. Nothing in my experience had told me that I should be. Prices were lower because it was a changing neighborhood. African-Americans had already encroached when they bought couple of homes on the fringe and that signaled the start of a decline. White homeowners believed that once a black family moved in, housing values in the immediate area would plummet. The belief, as beliefs often do, became a self-fulfilling prophecy as whites rushed to put houses on the market before the values dropped and the sudden appearance of new homes for sale drove prices downward.

I grew up in South Dakota, in a community that had almost no minorities in the general population. There was one African-American girl in my high school graduating class of 104. The state’s largest minority was Native American who were kept out of sight on reservations (see my earlier post on the subject.) The apprehension I felt on the streets of Detroit was the fear of the unknown, the fear of being without fellows of the same color nearby. And the fear that I felt in search of a home was that I would buy the wrong place, in the wrong neighborhood, and it would not be safe for my family.

I was aware of the racial conflict in America. I had read James Baldwin. As a high school teacher, I had my students (in an all white school) read Black Like Me. One of my white college classmates guarded James Meredith when Meredith walked to his first day of class at the University of Mississippi. I, like so many others, had seen the ugly violent face of discrimination and hatred as it played out on national TV. Detroit’s size was overwhelming, yes, but to be immersed among African-Americans for the first time in my life was a confrontation of sorts also. I didn’t want anyone I met to think that George Wallace spoke for me or that I was looking the other way at the lynching, church bombing, kidnapping and other atrocities that were taking place. I was fearful that, because of the color or my skin, I would be seen as another who could not be trusted because he belonged to the white hateful horde so violently opposed to allowing minorities to participate fully in American society. Yet here I was, two years after the Civil Rights Act of 1964, participating in a real estate venture that admitted racism as a consideration.

“This is probably OK,” the real estate consultant from my company told me. “You’ve got Oakman Boulevard right behind you. Those are expensive homes. Not just anyone can afford to move in there.”

I took a moment to knock on the door to the house next door. A woman called down to me from an upstairs window. “Yes?”

“I’m looking at the place next door for my family.”

“Can you tell me if there is shopping close by?”

“Oh, yes. Very close. I shop in Dearborn, and the store I go to is only minutes away.”

“How about the schools?” I asked.

“You’ll just have to forgive me. We are grandparents and don’t have children in school any more. The schools are on the other side of Joy Road.” I would find out that Joy Road was the line between the integrated neighborhoods and the changing neighborhoods of west Detroit. The implication of the woman’s comment was lost on me.

The house we bought, 8141 Appoline Avenue,  can still be viewed if Googled. http://www.trulia.com/homes/Michigan/Detroit/sold/2213577-8141-Appoline-St-Detroit-MI-48228 A concrete driveway and a garage have been added and the home at the time of this writing is up for sale. Houses in what is still called the Aviation Subdivision were built right after World War II. Situated on a small lots, the single family dwellings are very compact. The place I picked out offered only 1,414 square feet of living space on two floors. But, in 1966, it was only 18 years old and well laid out with many conveniences including a full basement, forced hot air heat, a half bath on the main floor, ceramic counter tops in the kitchen and a screen porch off the dining room. Ideal, we thought. I made an earnest money deposit of $100 and called my dad and asked him to please cover it for me until I got paid.

“I hope you don’t think that I was taking you for granted, Dad,” I said apologetically. 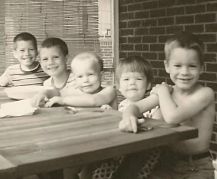 “You can take me for granted any time, son, when it comes to the welfare of your beautiful family.” He put the check in the mail to my wife back in Minneapolis so that it could be deposited. My wife flew out to join me. She liked the mature trees and the sidewalks. The scale of the neighborhood was comfortable, almost casual. The paved streets and square blocks reminded us of the Midwest. At the time, the street was lined with mature elms. The yards were meticulously groomed, some as pristine as golf putting greens, bent grass and all.

Since we had rented a home in Minneapolis, we were able to move as soon as the sale closed on the house in Detroit. My company paid to move our household goods. We packed the children into our 1959 Ford station wagon and headed cross country.

During the intervening years, the elms along Appoline Avenue must have succumbed to Dutch elm disease. The streets are no longer shaded as they once were. Otherwise, the neighborhood appears much as it did the day we took possession. We lived in our new home only three years, although it seemed longer at the time. One house across the street and down the block was bought by an African-American family before we put ours up for sale. The block was “broken” in other words. When we sold our home, it was the second on the block to be bought by an African-American family.

One neighbor acknowledged that the Civil Rights Act of 1964 had changed everything. “You did what you had to do,” he said to me after hearing about the sale.

My neighbor on the other side never spoke to anyone in the family again. He and his wife had been kind and generous toward us. I took his snub to mean that we had betrayed him and our other neighbors.

Nothing in our Midwestern upbringing prepared us for the changes, the violence, the hatred, and the heroics that became part of every day in a troubled city like Detroit.

To be continued. Please watch for my next post. Thank you.