My father died on May 28, 1980. I was in Oak Ridge, TN at the time. I returned to my motel room after dinner and found the message light blinking on the telephone, as I tell the story in my novel, Deadly Portfolio: A Killing in Hedge Funds. In the book, the man taking the call is Alan McAllister who in no other way is an autobiographical figure. As McAllister finds, the message was from my wife also, and I immediately returned her call to be informed that my dad had died earlier that day at the hospital in Yankton, SD. Dad was a scant 6 weeks away from his 76th birthday.

I had visited him at the hospital only a few days earlier, wanting to see him again before it was too late. I flew to Yankton from my home in Winston-Salem, NC. When I arrived, I found that he was barely aware of what was going on around him. I wrote a poem about it.

In the dim brown room,
An old man labored.
There had been some mistake.
This was not my dad,
Who had danced in the corn silk sun.
He was one the air would forget
If he failed just once
To pull life back in.

I called to him,
Summoned him to cross the fields
And crouch with me to watch
The canvasback circling in.

He raised himself
Out of the rubble of the sheets
And looked toward me
Like a man blinded in the morning glare.

He once would have straddled barbed wire
And picked his way across the crumbling furrows,
The harvest flattened stalks,
To where I stood,
But weariness overtook his rotten flesh,
And he slumped back
Into the murmurs
Of his bed.

I stroked his fine worn wisps of hair,
His fine round head.
He called my name.

He had fallen into a coma, every breath sounding as if it would be his last. I stayed at my brother’s home for three days, taking time each day to sit for a few hours at Dad’s bedside in the hospital. When it became apparent that nobody could predict when the end would come, I reluctantly decided to return home and my work.

After I left, Dad survived for several days after my departure. “And all this time,” Mother said, “we were worried about his heart. It was never the problem. His heart was strong right up until the last.”

Mother was right. Dad worried about angina and high blood pressure the last 30 years of his life. He died, however, from a series of small strokes that robbed him half a measure at a time of his ability to deal with life. “He just hung on and hung on,” Mother sobbed., “because his heart wouldn’t let him go.” It was painful for her to see him linger, even though she dreaded the onset of grief that she knew would follow hard after his passing.

As McAllister’s brother took care of everything in Deadly Portfolio, so too my brother, James (Jim) C. Hohn, took care of all the hospital affairs and funeral arrangements.

Jim and Mother knew that Dad was losing ground slowly. Months before his death, his behavior became benignly erratic. He was somewhat more forgetful than usual. He obsessed over trivial matters. But he made it through each day otherwise without difficulty for himself or those around him.

Months before his death, I returned for a visit. On my return, Jim and Dad met me at the Yankton airport, a small facility north of town that had been a favorite boyhood spot. “Don’t cry,” Dad admonished when I hugged him. Dad did, indeed, have a boyish innocence about him, but he seemed very much in control. I told Jim that I could not see anything wrong with our father.

“You need to be around him more,” Jim explained patiently. “He has good days and bad days. On the bad days, he is almost like a little boy. He doesn’t manage very well.” My brother must have agreed that Dad’s condition was at least manageable couple of months later because he saw Mother and Dad off on their annual trip by car to Phoenix for several weeks of golf, pool-side happy hours, and time with their friends who drove the distance with them in caravan.

While in Phoenix, Dad’s condition deteriorated. Alarmed, my brother flew down to check on him and arranged to have Dad flown back to Sioux Falls where friends met him and mother and drove them back to Yankton. I was concerned when I heard of his condition and I called him. “Good God son,” he said as soon as he recognized my voice, “they won’t let a man die in peace.” I did not know who they were, but then Dad loved the melodramatic, an indulgence that belied his South Dakota farm boy upbringing.

Thirty-two years have passed since his death—a long time. I was 41 years of age when he died. I think of him often. Like many men of his generation, he was not comfortable expressing affection.  In Deadly Portfolio, Matthew Wirth relates an incident from his boyhood that is right out of my earlier years.

It is early morning as the scene opens on the July 4. Matthew is standing on the dock in front of his lakeside home reminiscing.  His wife Shirley walks out to  join him. The conversation between them is centered around how parents demonstrate their love for their children.

“Think back. What things made you feel closest to your father?” Shirley asked.  “Things that convince you now, years later, that he cared for you and loved you. I’ll bet the list gets pretty long before you get to anything that he tried to tell you.”

“We flew a kite together one Wednesday on his afternoon off. Just the two of us. Out in the country in a meadow. The kite we bought at the dime store wouldn’t fly, and he got us back into the car, drove us to the lumber yard, bought two dowel sticks, and we went home and made a new kite out of newspaper. ‘I can damn well make a kite that will fly,’ he said. We mixed our own paste from flour and water. It was wonderful. We went back out to the field, and it flew so high that all the string spooled off into the sky. I can see it so clearly to this day.” 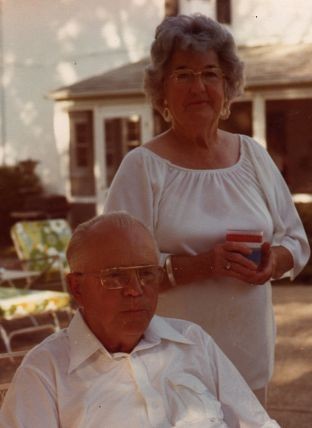 Dad and Mother, Phoenix, 1980, as Dad's Health Was Failing

Love is often easier to demonstrate than it is to communicate. Dad was great at demonstrating his love for me. Now that I am older, I find in myself so many qualities and quirks that I know are his legacy, both in DNA and,  more emphatically, in the manner in which he interacted with others, thought through problems and acted upon his better judgement. I revered my parents, as most do, while I was young, but as I advanced  in years, tracing my way over the same path they had trod– as parents, through middle-age, then as grandparents and into retirement–I began to see both as peers, a man and a woman, seeking to do what  they thought best given their view of the world, their sense of their place in it and the resources available to them. Seeing them in this more objective and detached light, I have grown to understand and appreciate them all the more. Whenever my admiration ebbs, I find compassion takes up the slack.

If you have enjoyed this article, please feel free to respond below or drop me a line at johnjhohn@aim.com. While you are here, I invite you to browse around the rest of my site. If you care to subscribe to the blog, click on the RSS icon below, the orange one, and subscribe on the page that comes up on your screen. Thanks for visiting.

EDITORS NOTE: I work alone. I do not have an editor. I compose my posts using Word and transfer  to the word processing program available through my web site manager. I use the spell check facility on both programs. Some spellings are personal preferences, such as “advisor” for “adviser.” (Either is correct.) I intentionally use incomplete sentences or fragments as a stylistic choice. As writers seldom are good proof readers of their own work, I welcome all corrections regarding errors in the text and apologize in advance for any oversights on my part.