I was raised Catholic. I look back in amazement to my boyhood when reasoning, educated adults imposed pointless regimentation on children in the name of religion. The Church, gratefully, has changed over the years. But in the early and mid-twentieth century, adults often invoked faith to justify the harsh treatment of the children entrusted to them. raised Catholic

Some assert belief requires a leap of faith. I can’t say. I do insist, however, that any act of the intellect requiring suspension of judgment and human capacity for thought and compassion is a forsaking of the best of man’s nature. Only blindness induced by belief explains the flawed psychology, sometimes questionable theology and stern, often abusive, treatment of children that was accepted practice when I was a boy. raised Catholic

My elementary education began in 1946. I went to Mass every day of the week except Saturday once I entered the first grade. Each morning, all students at Sacred Heart Elementary lined up grade-by-grade, girls in front of boys for the processional to church. No talking! We marched half a block to the corner, across the street, and into the vestibule of the church. raised Catholic

The nuns glided along with us, their arms folded underneath the scapulae which made them look very pious. Snow white wimples framed their pink faces. The scent of scorched starch on cotton trailed after each.

They marshaled us into the nave, and we filed into the first several pews nearest the sanctuary. Oldest in the back, girls on the left side of the aisle; boys on the right. Each sister took a position near the center aisle so that she could watch for any talking or horseplay. 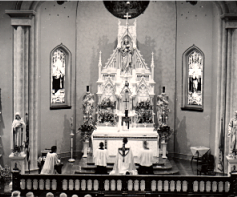 We learned to stand, kneel, genuflect, and sit at the appropriate times throughout the Mass. Ranging in age from 6 through 13, we were expected to be reverently attentive throughout the hour long Latin Mass. Yes! Latin. We understood nothing. To occupy us further, the nuns had us pray the rosary aloud. The girls would start, Hail Mary, full of grace, the Lord is with you . . . and would fall silent with. . . of thy womb Jesus, which concluded the first half of the prayer. Then the boys would pick up, Holy Mary, Mother of God . . . and conclude,. . . now and at the hour of our death. Amen. The prayer is repeated fifty times.

The rosary was at least in English. Still none of us understood. What was Mary’s womb? Why was Jesus the fruit of it? Why repeat the same prayer over and over? How would anyone know the hour of death? Liturgically it was all ludicrous, of course, but we prayed on and on, knelt and stood, genuflected and sat.

Kneeling was the worst. My knees got tired. My back got tired. To find relief, I settled my butt back on the edge of the pew. Before long sister would get up, step forward and motion to me to kneel up straight. Eating or chewing gum was a dreadful infraction. When Francis Flevares was caught chewing gum, Sister made him paste the wad on his nose and wear it there all day. When he returned from home after lunch, the wad was gone. That angered sister. She had not given him permission to remove it. She made him chew up a new slug, paste it in place and wear it all day and the next for disobeying her reprimand. Francis’ nose was red for a week afterwards.

In most Catholic churches there are three altars. The main altar is centered at the front of the nave in an area called the sanctuary. Two smaller flanking altars stand at either side of the main altar. 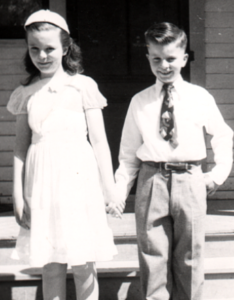 Author 11, and his sister Mary,12, going to church for Confirmation

The altar of the Blessed Virgin stands on the left. It featured St. Mary, the Blessed Mother and the mother of Christ, and on one side, a statue of St. Theresa, The Little Flower. The girls occupied the pews in front of the altar of the Blessed Virgin. The boys sat facing the altar of St. Joseph whose position in the life of Christ was never very clearly defined. He was the husband of Mary but not the father of Jesus. It would be years, of course, before any of us understood what was involved with becoming a father. We accepted that the father of Jesus was God, the Father. Providing for Mary and Jesus, however, fell to Joseph. When Jesus was 12 years old, which we calculated would have placed him in the seventh grade, He spoke in the temple. He announced He was there to do His Father’s business, and it was clear that Christ was not talking about Joseph, a carpenter. Joseph, however, was held up as a model of the self-effacing male — resolute, caring, hardworking, responsible, and not one to claim credit for anything.

To provide balance for St. Theresa, the altar of St. Joseph also featured a statue of St. Anthony, patron of lost causes. I never got the connection between St. Anthony and St. Joseph; nor for that matter, between St. Mary and St. Theresa. I just supposed the both were really holy, and I didn’t have much of a chance at being as good as either of them.

Throw My Worthless Self Away . . .

In fact, it was that first thought that led me to fantasize about how I could throw my worthless self away and find glory in doing it. During the Mass, the entire congregation was required to strike the breast and repeat three times, Lord, I am not worthy that you should come under my roof, but only say the word, and my soul will be healed. Three times! Nobody was worthy. Healing was required.

I was getting brainwashed into feeling unworthy, but I didn’t know how to heal the dreaded condition. The only healing I knew was what took place when I got sick with the flu. Catching the flu meant I needed to vomit. I hated vomiting. I hated the taste it left in my mouth, a taste like Thousand Island salad dressing.

Getting sick also meant mother would give me an enema with warm soapy water to clean out my sickness. I hated it. I had to be naked. I never liked being naked. I had to lie face down on a bath towel on the floor while mother stuck the nozzle from the tube up my butt. Mother kept the water running from a rubber bag until I thought my gut was going to burst. “Ow!” I would cry. But she kept filling me up until she was sure I wasn’t faking.

As soon as she quit, water would gush out and mother would shout, “Hold it. Hold it until you get to the potty.”

No way! Goosh! Water mixed with runny brown poop ran down my legs. I left a stinky trail of brown soapy water on the towel, the wooden bedroom floor and the floor in the bathroom before I was able to get my butt on the toilet seat.

So when all of us had to say  . . . and my soul will be healed,” I thought right away of having some sort of enema to my soul that would purge the unworthiness out of me. God could do it. But He needed only to say the word. That was good enough for me. Anything to avoid an enema.

I was persuaded that my soul was sick and I was unworthy. I thought the one thing that might save me from my sick, unworthy existence would be a fire breaking out on St. Joseph’s altar. A candle would ignite the altar linens and quickly spread to the wood around the tabernacle. Everything would happen so suddenly that the nuns wouldn’t know what to do. The first and second graders, who were closest to the inferno, would panic. They’d start clambering over one another, crying, falling down, becoming hopelessly entangled. This clearly was my moment.

I would push my way through the melee, run up to the altar and throw myself on the flames and roll around until the fire was crushed out by my body. Then, as the last spark was squashed into ash, in the face of everyone’s amazement and unrestrained gratitude, I would die a martyr. My sickness would not matter because of my heroic act. I would not need to worry about being unworthy any more because I would be dead. I died in church, at the feet of the statue of St. Joseph. I could not be refused salvation after such a heroic sacrifice for the sake of the others and the church itself.

At one level, the narrator’s story is humorous – unrealistic and grandiose as most childhood fantasies are. On the literal level, it is a tale as grim as the institutionalized mind-numbing monotonous ritual that inspired it. The worship as practiced preconditioned children to believe in their own unworthiness, setting the stage for depression later in life, and to spurn any tendency toward autonomy over themselves. Most would enter adulthood with unquestioning acceptance of the authorities on matters of faith and human nature.

If you have enjoyed this article, I invite you to look through the other pages of my website. Please feel free to comment int he area provided below, and stop by again. My five star rated novel, Deadly Portfolio: A Killing in Hedge Funds, is available on Amazon in paper back and Kindle versions. October 7, 2015 is the release date for my second novel, a sequel, entitled Breached. Watch for it.