The Three Musketeers was presented for the first time ever on Saturday, September 11, 2015 at The Barter Theatre in Abingdon, VA. Artistic Director Richard Rose made sure his audience was aware of the occasion in his opening remarks. Over they years, The Barter has many notable successes in presenting dramas that were not originally written for stage. Whether the company will enjoy the same with this play was still somewhat in doubt at the final curtain, although with the audience on its feet for an ovation, all bets are on the side of a good run.

The performances by the cast are uniformly strong. Joseph Matthew Veale is perfect as the young, idealistic D’Artagnan who arrives in Paris with a letter of introduction from his father that will allow him to enlist in the King’s Musketeers. Veale is an energetic presence on stage, thoroughly the young man from the country that he claims to be. His strong voice and athletic moves convince the audience that he will succeed at whatever impossible feats he attempts. He is at a loss for words when he meets the beautiful Constance. Their encounter is delightfully humorous and goes beyond the laughter to reveal a thoroughly believable innocence in D’Artaganan – a point of contrast with almost everyone else in the story, save Constance herself.

The plot gets underway quickly as D’Artagnan’s letter is stolen by the nefarious Rochfort. Rochfort is the strong-arm henchman of arc-villain Cardinal Richelieu. Nick Koester, as Rochfort, is an arrogant, cruel sociopath who takes his orders directly from Richelieu. Koester has the physicality for the role and delivers a flawless performance. Richelieu, meanwhile, is impeccably portrayed by Michael Poisson. Poisson brings a chilling surgical touch to the dark role of Richelieu as he delivers his more vicious lines with rapier precision. His final concession to D’Artagnan is a calculated acceptance of his circumstances, and the audience is left feeling Richelieu is not going away; he may have lost a battle but the war will go on.

Nicholas Piper as Monsieur de Treville is also perfectly cast. Piper plays Treville as the politically savvy commander of the Musketeers, a position that must have been as muddied for him as it was for the audience in that the King has soldiers as does the Cardinal, and they are often at odds with each other as well as the musketeers. Yet Treville always seems to know the score even without being entirely sure of where his own men are in the city. His Musketeers respect him, although any one of them could physically get the better of him. It must be the touch of the director, Katy Brown, that Piper, like other major characters, refuses the easily accessible melodramatic reading and chooses a more mater-of-fact delivery that makes his performance credible, perhaps all the more so because it runs counter to audience expectations of swashbuckling histrionics.

Sean Maximo Campos as Athos might bring Johnny Depp to mind for some in the audience. Personal tragedy drives the wily Athos, and Campos delivers as much as any audience has a right to ask in the final but unfortunate scene of the Act I. Porthos and Aramis, competently played by Andrew Hampton Livingston and Justin Tyler Lewis respectively, exchange quick witted repartee with their buddy Athos. Hannah Ingram’s Milady de Winter is a reserved villainess, stealthily in step with the other characters. The audience knows from the onset that she is a really bad lady. Ingram’s confident portrayal never lets the image slip.

Annie Simpson plays Constance Bonacieux, the youthful blond beauty with whom D’Artagnan is smitten. And why not. Simpson is angelic. One of the funniest lines in the show takes place when D’Artagnan falls to his knees proclaiming love to Constance upon first seeing her. Bewildered, Constance looks to her father. “He’s from the country,” her father observes as if it explains everything. The father, by the way, is played by the versatile Zacchaeus Kimbrel. Kimbrel appears in several key roles. His portrayal of the narcissistic, affected King Louis is wonderfully funny.

Derek Smith’s set design captures the darkness of the story line. Not everything turns out OK, after all, as American audiences might like. Sumptuous costume design by Howard Tsvi Kaplan dispels any notion that Musketeers is to be dismissed as mere fantasy.

Richard Rose has pushed the envelope for The Barter several different times during his years as the Artistic Director. The Three Musketeers is another one of his laudable efforts. It remains to be seen, however, whether Rose’s reach has exceeded his company’s grasp. The acting, under the very capable direction of Katy Brown, is superb. Stage combat is seriously dangerous stuff. With the season advancing, perhaps the actors will become more relaxed in the combat scenes. In the first show, however, the action was awkwardly hesitant. Audiences accustomed to cinematic portrayals may find the sword fighting to be noisy, staid and unrealistic. 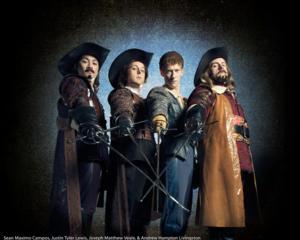 The Barters Three Musketeers plus one (l to r) Campos, Lewis, Veale and Livingston

The program does not list a playwright. Katy Brown is named dramaturge. The weakness in the show is not in the acting, the direction, or any of the production qualities. It’s in the script. Without giving the show away, the action in Act I is sustained by the suspense that Richelieu’s plot is going to bring down the queen. The plot is resolved before Act I ends. No tension whatsoever sustains the audience in the final scene of the act which comes off as something thrown in by the playwright to quickly background the audience for the rest of the play. This is where Campos puts Athos through a tortured drunken soliloquy about his own tragic past. Athos’ intoxication as the reason for his disclosure. Drunkenness is a gimmick, in other words, because there is nothing in the story line motivating Athos to confess to anything. The entire scene has the audience wondering where the plot is going next. It’s great acting; but bad drama.

A better script would have placed snippets of Athos’ past history earlier in the act. Milady de Winter should have been handled in the same manner and it would have created more intrigue for her character. Perhaps her fleur de lis branding would be discovered earlier. Other credible means hinting at the relationship between the two could be worked into the script. Curiosity should have been building about these two major characters throughout. As it is now, the justification for the last scene of Act I is not presented until after intermission in Act II. It would have been far better to sustain the suspense of the Cardinal’s plot to discredit the queen through the end of Act I or even beyond and integrate Athos’s tragedy organically into the flow of drama.

As it stands, the drama comes off as two one act plays strung together with the last scene of Act I serving as a lynch pin. Perhaps this weakness in the story line was to be overcome by thrilling sword fights and swashbuckling action. It wasn’t. There is good writing in the script but the basic development of the story is fatally flawed and unworthy of the legendary Dumas. The entire script needs a reworking that it is not likely to get.  It would be challenging task, but if the play has a future at all, the hard work of rewriting is needed to rectify its defects.

Audiences are nevertheless likely to be pleased throughout the current season with The Three Musketeers which is a tribute to The Barter, its production staff, and its company of fine actors.

Thanks for visiting my web site. While you are here, please take a minute or two and look through some of my other posts and pages. You are invited to make a comment in the area provided below.