Breathtaking production values are both the strength and the weakness in The Barter’s current presentation of Something Wicked This Way Came. The costumes transport the audience beyond the nostalgic world of the 1950s, the time period for the play, into a fantasy world full of amazing and frightening creatures.

Act I begins ominously with Jim Nightshade (Barrett Guyton) and Will Halloway (Joseph Matthew Veale)  greeting a lightning-rod salesman who’s sleazy pitch prophesizes that Nightshade’s house will be struck and burned to the ground. A mystery fueled by dread is in the air and randomly reinforced by threatening distant rolls of thunder. Once underway, Act I is so shrill that it is almost painful to sit through. Nighshade is all for bringing on whatever trouble awaits, while Halloway takes the side of caution. Emphasizing the point that both boys are only 13 years old, they tussle and yell at one another about the intriguing arrival of a carnival. Guyton and Veale inject their roles with adolescent exuberance – no doubt as directed. They romp vigorously around the stage. As a result, several things the playwright may have intended gets lost.

Halloway is a good lad. He tries to get Nightshade to be careful, avoid cursing, and generally be more thoughtful. Trouble is, aside from the lines he recites, Halloway’s dynamics mirror Nighsade’s. Push. Yell. Push some more. Yell louder. Nightshade is a voyeur. Halloway pleads that he come away from the window in a gratuitous scene intended supposedly to dramatize the difference between the two boys. Perhaps a contrast is being established. One boy, Halloway, wants to live by the rules whereas his pal, Nightshade, wants to break out from under them. Neither character, their slight differences notwithstanding, gives us much to like. When Act I ends we really don’t care what happens to either of them. Teenagers have a full repertoire of manipulative behaviors available. Ask any parent of a teenager. The two guys on stage come off as one dimensional.  Seduction, intrigue, curiosity are not in the mix. Simple bombast carries the action.

Before the carnival makes a formal entrance into town, a hall of mirrors appears. Playwright Ray Bradbury seems to suggest that too much reflection in life is dangerous. A person entering the hall of mirrors is exposed to images of the self that span a lifetime. Life is the mystery. It’s not quite clear why this is terrifying. Whether to accept where we are at any given point or pine, as Mr. Halloway (Will’s father) does, for our younger days is a universal predicament, a passage on the path to self-acceptance. But the hall of mirrors is a horror. Looking back is fraught with peril. No ambiguity here. Nightshade charges ahead disdainful of any threat. Halloway wimps out in the challenge to restrain him.

Act II, gratefully, begins with a quiet dialogue between Will Halloway and his father, played by Rick McVey. Mr. Halloway is 54, an old guy as the script would have it. Most of his life passed before he knew what was going on. His son is his principal achievement. He’d give just about anything if he could run again as his son does. Mr. Halloway is a wiser parent because he can recall his boyhood. The rapport between father and son is almost too idealistic to be credible, especially as the father vividly recalls his boyhood and recognizes how life is for his son. Halloway, for all his sanguinary recollections, becomes the protagonist, usurping the distinction from the boys who carried Act I with their hi-jinks.

Pushing ahead, Act II turns into a nightmarish extravaganza. The carnival arrives, or maybe it was there all along. The hall of mirrors, introduced in Act I, takes its place near a fantastic carousel with elegant horses – man, what elegant horses! The carousel becomes the center of action. Both attractions produce the same dreaded outcomes. They take people backward or forward in time, and if the reaction of the cast means anything, then falling victim to either is terrifying. Except for Jim, of course. He wants to become older right away. Perhaps he’s trying to out run his rage. 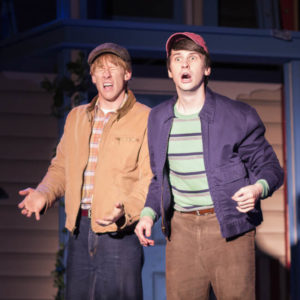 Joseph Matthew Veale and Barrett Guyton as Will land Jim

As in a bad dream, things that are assumed at one point become not true at another, and there is no accounting for why things turn as they do. The playwright indulges all kinds of license. Miss Foley is taken back physically to her childhood self only later to appear again returned to her adult self. She brushes off the terror of the experience as if it were nothing. Jim and Will have their ears stopped by Mr. Dark but later come back onto the scene understanding everything being said. A lot happens that just doesn’t matter. One of Mr. Dark’s sidekicks, also a villain, is turned into a boy and later, after being executed in an electric chair, a zombie. It doesn’t matter. The audience never liked him. It is all utterly unnecessary.

The plot buried deep underneath the flamboyant staging is that Jim needs to be saved from the carousel, which is to say, from himself. He is so eager to grow older he removes the lightening rod protection from his home with his mother (figure that one out – he wants her dead, burned no less?). But to round up, everyone, including the nonchalant townspeople strolling by as if not a thing in the world is amiss, needs to be safe from Mr. Dark, powerfully played by Nick Koesters.

Age and wisdom ultimately prevail. Mr. Dark and his horrible minions feed on the fear the mortals in the town. Halloway, played most credibly by the able Rick McVey, puts the Act II on his back and carries it in a 10K uphill soliloquy during which he instructs the audience on everything. Good thing, too, because bewilderment reigns at this point. Dark and his entourage are so scary, it is really difficult to know what their intentions are or how they are ever going to vacate the town square. Evil, yes; but not very aggressive. Jim, Miss Foley and Mr. Halloway are drawn into the menacing carnival world but all escape unscathed. After all, the uninvited guests are wicked which is not necessarily to be equated with evil.

Halloway figures it all out. There’s an antidote for fear. Laughing past the cemetery. Right. Turns out, laughter is the cure. “Where’d you’d put the most recent Readers’ Digest, dear?” Halloway enjoys the last laugh. His son steadies his aim in destroying the Dust Witch, (got to be some symbolism there somewhere) and at 54 he finds he can run with the boys again. 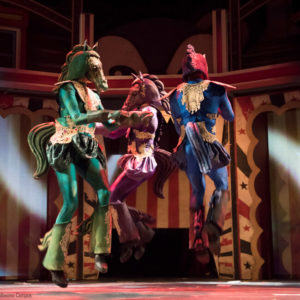 The Horses from the Carousel – Magnificent.

The actors, to a person, turn in excellent performances. The play is a gaudy muddle. Audiences will end up dazzled and confused, reminiscent of an old salesman’s adage, “If you can convince them with logic, baffle them with BS.” The problem with the play could be in the script. Leaving an actor to explain everything in the middle of Act II suggests we are seeing a draft rather than a finished script. None of the characters draw upon the sympathy of the audience. Mr. Halloway is the only character with any depth. No tears of relief are shed in the saving of Jim. No joy in the downfall of Mr. Dark. The plot builds very little tension. Dark and his carnival finally go away. The audience jumps to its feet at the curtain because they have been wowed by the staging. The costumes are amazing. The set, except for the unexplained visage of Felix, the Cat peering over all the proceedings, is fanciful and fun. Richard Rose’s direction seems to dwell on the obvious at the expense of the subtle and the nuanced. If it is loud, then it’s got to be good. Then, again, the script may not have much that lends itself to shading and contrast.

Rose gets credit, however. His Something Wicked This Way Comes manages to be very entertaining and off-the-chart dramatic without being very good drama.

Thanks for visiting my web site. While you are here, please take a moment and look through the other articles that have been posted here over the years. I invite you to enter your comments in the space provided below. Thanks, again.