Blogging becomes a strict task master after posting a  few dozen articles. I started out with the notion that blogging would be a gratifying creative outlet. It has been. I also thought that it would help make people aware of my novel, Deadly Portfolio: A Killing in Hedge Funds, and there is some evidence that is also the case. As time has passed, however, I find I am walking about every week in a quietly anxious state brought on by the need to come up with a topic for my next post.

Several times, I have begun an article with the announcement that it would be the first in a series on a given subject. I have followed through on many, but not all. I have not exactly abandoned those themes that seemed at one time to be so bountiful. I tell myself that I have simply postponed the subsequent articles until I am revisited by the spirit that prompted me to consider them in the first place. Gratefully, none of my readers have noted how slack I have been in my casual commitments.

With my seventy-fifth birthday just a few months away, and in desperate search for another source of inspiration, I decided to make a list of the changes that have taken place in my lifetime, changes that have had a profound impact on my life and the life of the communities in which I have lived – American society, in other words, as I have experienced it. This theme seemed to offer a cornucopia of new topics.

Change versus Trends or Fads . . .

To be clear, changes are by definition different from trends or fads, both of which are transitory. Trends may last a generation but eventually lose a following. Fads rise and fall in a matter of a couple of years, if not a few months. Obesity in America is a trend, to illustrate, that will one day reverse itself as the population becomes more aware of the health risks involved in being grossly over weight. The shrinking of the middle class in America and widening of the gap between the wealthy and the rest of the population is also a trend. It too will be reversed eventually because it is bad economics. A free enterprise system depends upon a vigorous, growing middle-class. Even the wealthiest among us, who seem to be having their day with tax breaks and cutting social programs, will realize that greed is a cancer that destroys a healthy host. To stay on top of the heap, they will need to back programs that help the heap grow.

Hula hoops, falling-off-the-ass blue jeans, tattoos (permanent as they may be) are fads. They come and go. A store downtown advertises “Shabby Chic.” That’s what? – dressing in a manner that everyone knows is very expensive in order to avoid being ostentatious.

Change is irreversible. The accidental features of it may tweak one way or another, but the core change takes root in a culture. There is no turning back. Radio broadcasts were once available only a large, vacuum-powered sets that occupied a central place in the home. Over the decades, radios have been reduced to the size of a cigarette lighter and are more powerful than ever. The change wrought in culture by the introduction of radio has remained essentially the same, however, and if anything, its impact was extended even more by technology.

Nostalgia is seductive. I despise the sentimental rubbish that gets published about bygone years. Its popularity only proves that most humans possess selective memories. Every age had its problems. Every era experienced anxieties prompted by contagion, war, poverty, race relations, marital strife  – the list goes on. It is a mistake to brush it all aside in a rush of trite recollections about how much better things once were. Social media broadcasts weekly postings about past decades that suggest how much better things once were and how regretful is that time cannot be turned back to the good old days. 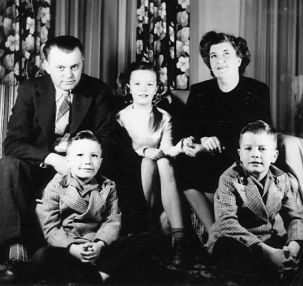 The only thing good about the good old days is that they are behind us and we survived them. They feel safe to us because we are beyond their reach. We remember chewing anti-polio gum and laugh at how ridiculous it was. At the same time, we forget about iron lungs and youngsters in the prime of their youth crippled for life by the disease. As for  our own lives, if any among us were allowed through some miracle of science to return to our youth, we would go back and make as big a mess of it as we did initially. We would find ourselves as miserable or as happy as we ever were. We would then, as now, yearn for things to get better in our lives. Nostalgia is a mild form of self-induced intoxication. Life has not been essentially different from the way it is in the present. At the very core of our existence, that may hold for at least several thousand years.  Life is not comfort. Life is not ease. Life is always a quest; sometimes a mean and humbling one, sometimes a rewarding one. And most often, we do not get tho choose. Fate does it for us.

So with the preamble, I launch my new project. Expediency is part of this decision. I need more time to finish the sequel to my novel. I need to feel free of the struggle to come up with new blogging ideas each week for my web site. Perhaps striking out on this path will satisfy my objectives in both efforts.

What follows is my list, as yet perhaps incomplete, of the changes that I think have had a profound impact on life today as I have witnessed it over the span of my years on the planet. The following are not necessarily in the order of importance or magnitude of impact:

I know that I will be adding to the above. At the same time, I doubt that I will be writing about each subject, at least as it appears in the list. I encourage my readers to make their own lists. Please send any additions to me via email or use the comment section at the end of this post.

Douglas at Fourth, Yankton, SD circa 1947 Everyone had worries then also.

Years ago, Alvin Toffler wrote Future Shock in which he observes that the rate of change in our society has accelerated at such a pace that the crisis most of us face is accepting the changes that are happening all around us and integrating them into our lives with the least amount of stress. Very little seems permanent any more. Even as we come up on the holiday season, Rudolph, the Grinch, Alvin and the Chipmunks, Frosty the Snowman, and other icons of the season have been brought into being since the end of World War II. Homeostasis is disrupted, teetering and seeking to reestablish itself on an evasive base. What once was normal is gone. It has been inundated in a tsunami of change. We may grow to distrust or disdain the past and seek change of its own sake. In doing so,  we become addicted to the stimuli that herds us like cattle through each day and year.

On the other hand, as a river eventually fans out to form its own delta, change will become less dramatic and become measured in smaller and smaller doses until it becomes less disruptive. We may then find that the haven of the home and permanence of family are again more central than ever in our lives. Have you booked your reservation to go to the moon yet?

Thanks for visiting my web site. While you are here, I invite you to investigate the posts that are in the library here. Please feel free to comment in the area provided below. You would be welcomed at any time.