Mention the Black Panthers, and anyone born after World War II will probably recall the political party that was founded as part of the Black Power movement in the 1960s. Less likely is that anyone recalls a group of African-American G. I. tankers who fought under General George Patton in his armor campaign in Europe in 1944 and 1945. In The Black Panthers at War, author Gina M. Dinicolo mentions the men of the 761st tanker company adopted the name “Black Panthers” for their group, but history proves that the designation did not stick. By contrast, consider the legendary African-American fighter pilots of the Tuskegee Airmen. The Red Tails made history escorting allied bombers on raids into Germany. Or the Red Ball Express. African-American drivers kept the allied forces supplied as they pushed across Europe. Their commitment and endurance completing 36 hours stints in the cab garnered recognition and praise.

African-Americans were relegated to support functions for the most part in World War II. As cooks, truck drivers, mechanics and logistical support, few were exposed to combat. Author Dinicolo points out that the prejudice against blacks was institutionalized in the years leading up to WWII. Army manuals stated that the performance of black Americans was expected to be less than that of whites. Her introduction focuses on the racial tensions and violence that were part of life in the U. S. during the years leading up to the war. The prevailing prejudice was blacks did not possess the skills or the willingness to fight. The armed forces remained segregated during World War II, but the demand for manpower dictated that blacks were needed on the front lines. They would go into combat, however, as a black unit, perhaps led by a white officer, but black throughout the ranks. 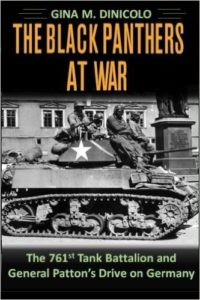 Cover: The Black Panthers at War

Nobody today doubts the ability or willingness of African-Americans to perform valiantly in combat. Viet Nam dispelled that final shard of ignorance and bigotry. Writing of the 1940s, the theme of lowered expectations of minorities is carried out through the final chapter of Black Panthers at War. One chapter is dedicated to baseball legend Jackie Robinson who was court marshaled on a charge of being disrespectful toward a fellow white officer. Robinson was acquitted but left service because of the charge. Aside from detailed reporting of the frequent incidents of discrimination within the ranks and among the civilians, the author does not expand her perspective beyond the context of the time in which the action she reports took place. Her book adds little in helping readers understand the nature of prejudice and its implications as the conflict and misunderstanding continues through to the present day.

Dinicolo makes an all-out effort, however, at claiming the tankers’ share of fame and recognition, but her story drops several rounds short. It fails to enshrine the heroism and sacrifice of the men it is all about. Dinicolo’s flaccid prose doesn’t create a sense of tension and eminent danger. By attempting to provide the stories of several men in the 761st, her narrative becomes diffuse and superficial. Her prose doesn’t excite much empathy or compassion. The battle scenes are not dramatic, with little sense of challenge or urgency. She relies heavily on mundane modifiers to lead readers. Economy of expression is sacrificed to stating the obvious.

For example: “Germans would kill anyone trying to take the town.”

“Enemy fire resulted in a series of tremendous explosions.” (What else?)

As an author, she’s not in the battle, not with her troops. 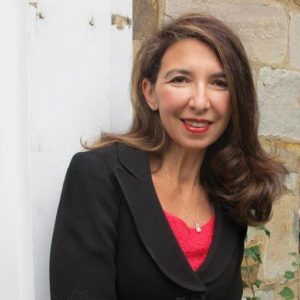 Dinicolo follows several men from enlistment to the battlefield. She is well-grounded in the facts about their training and the battles in which they participated. But her ultimate failure to identify with her subjects becomes evident when she refers to the infantry as “doughboys,” a World War I nickname long out of use by World War II. Dinicolo compounds the gaff by shortening the nickname to “doughs,” a title of her own creation never to be found in print or film about WWII.

A model for any writer in undertaking a military history of any group is Band of Brothers by Stephen Ambrose. Ambrose captures the Esprit de corps of his company, provides insight into his subjects without resorting to lengthy biographical sketches, and holds the readers by organizing his story around various themes, whether the conflict with the officers in training or the horror of post traumatic shock syndrome. Readers realize the Ambrose’s intention. Dinicolo, on the other hand, adds too much to the mix, almost as if she is compensating for a lack of dramatic focus. The men of E Company in Band of Brothers may, in the final analysis, simply have been another group of guys – white guys – caught up in a war like thousands of others their age. Ambrose found the unifying heart to their efforts. The same story could have been written about nearly any other company in the U.  S. Army at the time, but E Company is proxy for all of them. Readers take their experience as representative of all the G. I.s.

The same opportunity was available to Dinicolo. But she relied more upon the 761st being African-American to set them apart. Otherwise, their experience was much like any other company in the conflict. with the extraordinary exception that they faced prejudice, derision, and bigotry and served anyway. They fought for a county that treated them as second-class citizens. What Dinicolo fails to develop is why these brave black men fought. Blacks in the United States did not see World War II as a white man’s war. They saw it as every man’s war. A war against their country, inequality notwithstanding. A war for democracy. A war against tyranny, injustice and the exploitation of others – conditions of life that African-Americans endured in varying degrees in the U. S.

Black Panthers at War chronicles the achievements of very brave and talented soldiers. Any criticism of the work about them should not detract from the magnitude of their accomplishments. That said, any student of World War II and the history of racism in America will find it hard to avoid being disappointed in Dinicolo’s work. Blacks, after all, harbored no doubts about their ability. What they achieved is not the greater because white America thought they were less than capable. Astonishment on the part of any is indicative of prejudice. In an ideal world, their accomplishments would never have been set apart because of race. Instead, they would be recognized for their extraordinary valor, tenacity, skill and drive.

A byproduct of finding one’s rightful place in a society is that achievements, more often as not, go unnoticed. Being part of the crowd carries some assurance of anonymity. Dinicolo never claims the record of the 761st is exemplary because of the racial mix of the company. On the other hand, she does not establish the dynamics of the group or the heroic dimensions of their achievements on a scale that makes them any more exceptional than what others experienced and survived. The same could be said of Ambrose’s Company E. The difference between the two groups is not race but the way in which their stories are told. Black Panthers at War is rich in subject matter. Too bad so little is explored at any depth.

Thanks for visiting my web site, while you are here, I invite you to look through the other pages and enter a comment in the area provided below.