This is a third installment on a series that I have offered on my family’s experience living in Detroit during the mid-1960’s, a period of violent social unrest and the battle over Civil Rights. Readers are urged to read the previous post(s) before wading into this one.

My wife and I were fearful when we went to bed on Sunday night, July 23, 1967. Local television gave us no assurance that the rioting was under control. If anything, the violence was spreading. Starting on the northwest side of the city, perhaps as close as two miles away from our home, it spread to the northeast side of town during the day. In both areas, the population was over 90% African-American. My fear was that mobs of youths from these areas would spread out to attack whites in the neighboring communities. Here we were, with the night upon us, two blocks from notoriously racial Dearborn, smug in their defiance of Civil Rights. Whites, it seemed to me, had to be the enemy, the oppressors, the bigots. Surely they would be the target of all the anger and vengeance.

The following morning, however, most of the newscasters’ attention was on the political issues involved. While Detroit burned, Governor George Romney, President Lyndon B. Johnson and Detroit Mayor Jerome Cavanaugh were playing politics. Cavanaugh was an energetic, charismatic white liberal. Romney was establishment Republican and the differences between the two men came into play when Cavanaugh requested help from the National Guard. The bickering delayed dispatching the troops during a period of time when Detroit and Wayne County Officers could no longer contain events.

President Johnson held out for higher stakes. He wanted Romney to declare the disturbance in Detroit as a civil insurrection before he would agree to dispatch any Federal troops. Romney meanwhile mobilized the National Guard troops on Sunday, July23 so that they came onto the scene late in the day, but they were not empowered to arrest anyone. None had been trained for riot duty or urban guerrilla warfare, which is what the riot was becoming. Fearful and trigger happy, without good tactical training and experienced leadership, the National Guard did not make the impressive show of force that was needed to clear the streets. If anything, matters simply grew much worse. 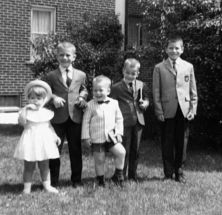 My wife and I did not know what to expect. We had read about the 1965 Los Angeles Watts riots and saw with horror how the blacks were treated by the police and how the destruction, looting, and arson was carried out indiscriminately, but we never dreamed that Detroit would be the next city to be racked by violence. Seeing a National Guard jeep full of white guardsmen tooling down Oakman Boulevard just one block from our home did nothing to allay our fears. We insisted that our children remain indoors or in the backyard of our home and tried to follow events as they were unfolding by watching television.

The inner city was out of control. Two deaths had been reported. Black businesses were being looted and burned along with white-owned stores and shops. Anarchy reigned. Anyone who had a score to settle, a debt to obliterate, or out to scoop up a haul to sell later was on a rampage. A white man was mistaken for a sniper and shot dead by a National Guardsman. The man had been trying to keep sparks off the roof of his apartment building. A white woman was killed by gunfire in a car as she and her husband sped away to escape from a scene where a white man was being beaten. But the rest of the deaths reported during the day involved African-American victims. Reports were sketchy. The details came out often days later. Several of the deaths were caused by the National Guard, and several of them involved mistaken identity, mistaken intention on the part of the victim, or a victim fleeing the scene of a minor theft. I thought of what my boss had said. He could not have been more wrong. Killing solves nothing. It makes matters much, much worse.

From my front porch, I could hear the gunfire and see the smoke. Almost 500 fires were set on Monday, at least half of them raging within two or three miles of my home (as the crow flies). Yet, it was all taking place in a neighborhood that I had never visited. I had never shopped there. Never eaten at any of the restaurants. As close as we were, whatever was happening was happening to them. They were not part of our Detroit. They were not part of our neighborhood. They lived in a different city, on a different planet, and after a year-and-a-half since we moved in I, the young liberal father of five from Minnesota, knew nothing of what life was like for the people caught up in the destruction and death.  President Johnson could not have been more wrong in asking that the event be dubbed an insurrection, although doing so did give him the grounds to send in the 82nd Airborne. Insurrections are led. They are directed at strategic targets. What was happening in Detroit was chaos, a spontaneous erupting conflagration.

On Monday, the phone went dead. I could not contact my boss. I did not know whether the office was going to open on Tuesday. I was warry with my new Ford Galaxy 500 Hardtop sitting on the curb in front of the house, but we had no garage. My discomfort provoked me into thinking that I should drive around in the neighborhood, just to see if anyone was experiencing things any differently. I did not go far before pulling up to a traffic signal on the inside right turn lane.

A huge Buick pulled up next to me, the windows down. An African-American woman was driving it. “You ain’t fixed nothin’,” she shouted back to a heavy man in the back seat who was swilling a beer. “They gonna move in an’ there’ll be hell to pay. It’s gonna be worse than before, you’ll see. You won’t think you done so much then like you do now.” The light changed and the car sped away. I decided to return home.

The violence increased Monday night. Snipers had been reported. Some had shot at the firemen who were trying to put out the fires blazing throughout the riot area.  Others took potshots at National Guardsman. Guardsman hunkered down in the dark shot out out the street lights so that they could not be seen easily. Hearing nothing from my company, I decided that I should report for work on Tuesday morning. I drove to the Cobo Hall parking garage near the Detroit River. My early morning route had taken me through the fringe of some of the areas where the destruction had taken place. It looked like a war zone. Plate glass store fronts were shattered. Trash and debris littered the streets, much of it abandoned merchandise that was discarded in haste. 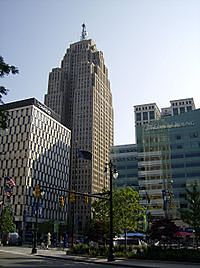 Kennedy Square in Downtown Detroit today. The Penobscot Building dominates the buildings surrounding the square. The Dime Bank Building can be seen on the right with both wings protruding into the skyline.

The heart of the downtown business district was quiet. Almost no traffic. It was obvious that the businesses of the city were not going to open up for the day. My walk to the Dime Bank Building on Kennedy Square took me directly in front of one of the major fire houses serving downtown. As I approached, I saw what appeared to be bodies lying on the sidewalk in front of the station. As I drew closer, however, I realized that I was looking at firemen, still in their gear, lying on the concrete to rest. They didn’t acknowledge my passing. When I looked up, I saw bullet holes in the windshield and the cab of one truck.

I was one of only two people who reported for work. I went to my desk and decided to wait a few minutes to see if anyone else showed up. The elevator doors opened and two white guys got off on our floor and looked around.

“Can I help you?” I asked walking up to them and not recognizing either.

“Yeah. We just got in from Hartford. We need to conduct an audit,” the first man said.

“Yes, we want to talk to the supervisor of your premium reporting (accounting) unit. She will need to get the records together for us to review,” his partner announced, catching the puzzled look on my face.

“She’s not here. As you can see, nobody’s here. There’s a riot going on in town. Businesses are not opening,” I explained, incredulous over their appearance given all the news that had been broadcast about the situation.

“Maybe you could show us the records we need to review,” the first guy asked, undeterred by anything I had said.

“I don’t know the unit.  I don’t have access to the accounting records. I can’t help you.”

“Where is the unit?”

“Back this way. It is at the end of the south wing on this floor.”

“Do you mind if we go back to see if we can located the records we need to review.”

“I can’t authorize that. I don’t know who you guys are. You need to come back some other time. The two looked at one another and then back at me, shrugged, and rang for the elevator. I never saw either of them again. I walked back to my car at Cobo Hall and drove home. Tuesday had just begun, and it may have proved to be the most violent day of the week.