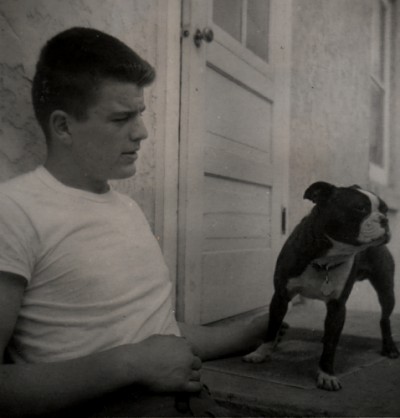 My mother was born on April 6, 1904. She died in January 1985. She is often a subject in my poetry. For the post today, I am featuring two poems about her as a commemorative. The first is a memory piece. My brother and I had slept in an upstairs bedroom in our home. The telephone was located at the foot of the stairs  in an alcove so that it could be reached from either the stairwell or the hallway on the main floor. On Saturday morning when there was no school, I would sleep late, sometimes until around 9:30. Frequently, I was roused from my adolescent slumber by the sound of mother visiting with someone on the phone, perhaps her sister who lived on the other side of town or perhaps with the grocer as she placed her order for the week.

Her voice blossomed
In the stairwell.
My waking thoughts
Trembled on the bloom.
I descended into her fuss,
Through the dining room —
Air fat as furniture polish.
The breeze from the river
Vaulted the sill
And spun spires of pink roses
Over milky pools of bone china.
She sang to the wrens
Perched in the cotoneaster,
Then sat to have coffee and chat.
My plans for the afternoon
Pooled up on my plate
And the sun on the hedge
Tripped away with her song.

The second piece is about an incident many years later when neither she nor I found that our lives had worked out for us as we may once have hoped. I was divorced. All my children had left home. I was starting my career all over again because the company I was with failed. During that time, I had traveled back to Yankton to visit my brother and his wife and see my mother who was battling breast cancer. My father had died a couple of years earlier, and mother struggled with her grief and missing him as she tried to regain her health and vitality.

One night, while I was staying at my mother’s home, I could not sleep. I got out of bed and finding a chair in the living room, settled down with my thoughts and my distress. From my chair, I could look down the hallway that leads to the back of the house. All three bedrooms opened off of the hallway. I heard someone moving about and I looked up to see mother in the hallway crossing to the door to the bedroom I had just vacated. I knew if I spoke that I would startle her.

She stopped in the hallway
And peered
Into the dark room.
Seeing the bed again empty,
She wrapped the boughs of night
Tightly around her
And returned with a shrug
To her bed.
A trapped bird fluttered
In the fireplace chimney.
In the living room, the davenport,
Swollen like a neglected promise,
Stood nearly awash in the echoes
Of highball laughter.
The arthritic Frigidaire stirred.
Dust storms scudded
Across the braided rug
By the kitchen door.
Tomorrow’s news crouched
In the wooden Philco
By the white sink.
A brown paper bag,
Filled with dirty turnips,
Sat on the front porch steps.
In the morning,
Neighborhood boys,
On their way to school,
Would shout up the street
With the backs to the dawn.

Humans imbue places with essences of who they are, as if we cannot take in everything that is happening in an given moment so we shove the excess into the physical setting of where we happened to be at the time. Thus, when we return years later to a place, or when we retrieve an item that was part of a place that was special to us at one time, the excess is released back to us. We recall who we were and how the world and our lives felt to us, and while can we dismiss the experience as mere recollection, it is a re-experiencing of a past event and it can move us as deeply as we allow. That is why the things in both poems are special to me.

If you have enjoyed this post, I invite  you to check out the other pages of this web site. I also invite you to click on the RSS icon in the left margin to be notified of future posts. I try to post three times a week  on Tuesday, Friday and Sunday. Thanks for looking in on my web site.