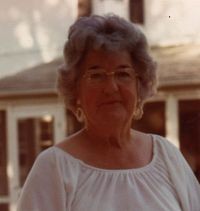 “Oh, Sonny,” she would start to explain, and then lose the thread to her thought. “That’s just the sort of thing that a person . .  . well . . . a person just . . . knows.” She would laugh until she cried at Donald O’Conner, Danny Kaye, Lou Costello, Gracie Allen and Lucille Ball, especially when they seemed overwhelmed with their plight. In later years it came to me that their humor was a metaphor for her. She must have seen herself in their antics and laughed because of it. When Dad wouldn’t take her to the movies, she took me—on a school night, no less. We saw Mario Lanza in The Student Prince, The Great Caruso, and Because You Are Mine. We saw all of the Francis, the Talking Mule movies and Singing in the Rain every time it came back to town.

She loved Lawrence Welk who was a guest in our home when he first began with WNAX radio in Yankton, SD. She exhorted my sister and my brother and me “ . . . to be somebody” in a way that told us that she didn’t think we were and that she probably didn’t believe she was either.

Ileen Carlon Hohn as a College Student, circa 1921

Mother was proud of her Irish heritage. Dad, of course, was German. Mother would decry during one of her lectures to the three of us, “An Irishman may be drunk. He may be a good for nothing loothy,* but he could make his woman feel loved.” Or later, when she thought we were older, therefore, sympathetic, she delighted in saying, “First there’s me, then Gott, then nobody, then nobody, then maybe you. That’s a German for you.”

Poor Dad. Mother remained a mystery to him. One year, Dad gave mother a 20 gauge shotgun for Christmas. “I got buck fever,” Mother said when she came out of the cornfield. A pheasant took flight in front of her in the corn rows that towered over her stout 5 foot, 2 inch frame, and she could not fire the gun. She never tried again. Dad cut the stock down on the gun so that my brother and I could fit it to our shoulders.

We often drove over to Lake Okoboji in Iowa, a distance of about 300 miles, to stay with my Aunt May, mother’s sister, who had a cottage on the lake shore. Dad often stayed home to attend to his dental practice. We loved it when Mother drove and Dad was not in the car. The speed slowly picked up on her until she was flying down the highway well over the speed limit.

“My God, how did you get here so fast?” Dad demanded as we pulled into the driveway at the end of one return trip. Mother had called to say we were on our way before we got into the car at the lake. 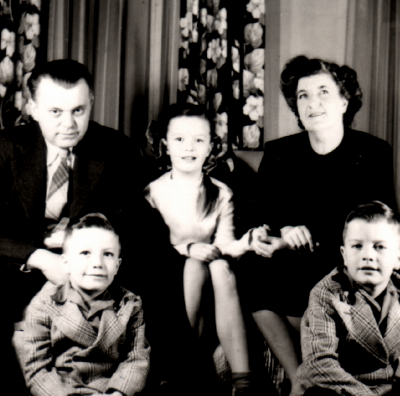 “I  drove 55 miles an hour all the way, Daddy, except when we were on gravel.” In the 1940’s, it was common to have a stretch of gravel road somewhere on a route of any distance when driving in the Midwest. High speeds on gravel were not safe. The route we followed to Lake Okoboji had about a 35 miles stretch as soon as we crossed into Iowa.

Dad said nothing. He went into the house, sat down at the dining room table, and began writing. “OK,” he announced after a few minutes. “If you drove 55 miles an hour on the paved roads, then the way I figure it, you drove at least 223 miles per hour on the gravel road.”

Mother and I had a special connection. Her intuition was her genius. “That wasn’t careless driving,” she scolded when I scraped the side of the station wagon against the garage door. “That’s something a boy would do when he is thinking about the wrong things.”  I had just broken up with my steady girlfriend and wondered how Mother could possibly know.

I called her often after I moved away from home. “Hello, Sonny,” she would answer. She had no way of knowing that I was on the other end of the line.

“You’re not here to listen to all the times that it is not you,” Dad would grumble.

Some of mother’s mannerisms have become family legend. A takeout restaurant in Yankton featured a specialty they called “Chicken in A Basket.” Mother would order to pick up on the phone, “I want two hens in their pens. No. No. Two . . . ah . . . let see . .two Big ones in a box.  The super dooper. The all in one. After a while, the order takers got to know what mother meant when she called. Now, years after she has passed on, my children tease one another when they cannot remember the name of a featured special at a restaurant by running through the list of malapropisms they remember that Nana favored.

Mother was an avid golfer. She played in two-ball-foursome with Dad at the country club. She placed in a women’s tournament in Irene, SD and was awarded a trophy. It was the only time she won anything and the trophy was still on her dresser when we began clearing out the house after her funeral.

But for all of that, I know my mother loved me. At the time the poem below was written, I was separated from my first wife, and we were headed for divorce. I took my youngest son home for a visit, and I was standing in the living room of our home on Fifth Street in Yankton. “Oh, Sonny, I know how it must hurt,” she said walking up behind me and stroking my shoulder. She couldn’t possibly know, I thought. Then I realized that—yes of course—she knew.

After a time, we are responsible for who we are, but we are not responsible when another does not know how or cannot find a way to love us.

My mother is still with me in the quiet of the house on days when I am alone. I wrote a poem about it.

I thought this quiet in the house
Was part of her–
Something she created,
As she moved from room to room,
Straightening the knitted afghan
On the red frieze davenport
With arms worn thread bare
From my father’s shoes
As he napped for 20 minutes
Each weekday at noon.

Or stooping to pick up a magazine
That had slipped from its casual perch
On the broad arm of the brown easy chair,
And lay spine up on the beige carpet
Like a vacant tent on a dessert floor.

Or paging through the thin gray telephone directory
For the number of the pretty young woman she met
Earlier in the week at the altar society meeting
So that she could just say “Hello.”

I thought it was part of her
But here it is in a place
She can no longer reach
It hovers over the same simple tasks
As the day first slides
Into its morning stride
And the house is empty
Except for me. 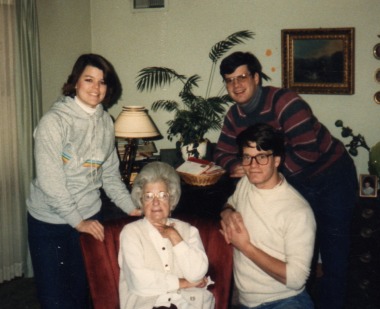 The last time I saw my mother alive was during Christmas of 1984. She was very ill. She knew that she was dying. My brother and his wife were looking after her, taking care of her affairs, and giving her a bedroom in their home on the nights that were most uncomfortable for her. I was grateful for the time that I could spend with her. She was very alert, and we were able to visit as if she were in perfect health. I drove her home that night and the next morning we parted.

She waved good-bye ot me from the kitchen window as my car idled on the icy driveway where my brother and I had played basketball for hours on end with our friends. My hands were as cold as though they held the mud wet ball, but I waved back and drove down the gritty alley that led as far as once I was permitted to. Glancing back, I saw her turn and head for the dining room that would sleep on forever now from all the family feasts

*Loothy Mother’s expression for anyone who is careless about personal hygiene, unambitious, and somewhat untrustworthy.

If you enjoyed this article, I  invite you to comment below. Also, please take a minute or two and investigate the other pages of my web site. Thank you for looking in on it.