The following is an installment in a series of posts dealing with the options available to the underage parents of a child born out of wedlock during the 1950’s, before the advent of outpatient abortions, the pill, and a dramatic change in the public view with regard to sex prior to marriage.

My son was born on Thursday, April 18. The very next day, Monsignor Reilly and I drove to the hospital in Norfolk, Nebraska, 90 miles distant, to see Elaine and arrange for the Catholic Baptism for my son as my father demanded. Once in the car, Monsignor could see that I was anxious, so he decided to regale me with stories of his own boyhood and seminary years. I knew that he meant well, but his stories came right out of the Stone Age as far as I was concerned. I half hoped that we could just keep driving, that we would never reach Norfolk, even if meant listening to Monsignor for the next 10,000 miles. We finally arrived and parked Dad’s big Buick Super in the hospital parking lot.

I went directly to the single room where Elaine was recovering from her labor. I noticed the snow white bed covers as soon as I entered. She turned toward me without raising her head from the glistening white pillow, her face framed by her soft brown hair. Our eyes met. All my denial was washed away. I felt ashamed that I had abandoned her, that I had put her out of my mind for so many weeks. She had gone through everything alone. The usual gleam in her brown eyes was dulled by a dusky haze that spoke of her fatigue and her weariness at being alone. I knelt down at her bedside and without a thought, begged her forgiveness and blurted out how much I had missed her.

Mother and Child Had Not Been United

Elaine had not seen nor held our son. Hospital policy regarding children who were up for adoption dictated that the mother and child would not be united after birth. Looking at her, I did not want to talk about our son’s baptism. It seemed an absurd request, utterly out of keeping with what I felt and in no stretch responsive to what her needs may have been at that moment. Instead, I pleaded with her to give us the time to see if we could work things out so that we could be together and we could have our son and raise him as the first in our family. We did not want our child to be given to another, to be taken out into the world so that we would never know who he was or where he was. Time, a few days, was all I was asking.

She agreed. She wanted to see her son and to hold him. Word went out to the nursery, and in a few moments an nurse entered with a white bundle and placed our son in Elaine’s arms. Elaine pulled back the blanket to look at his round red head as he slept. She looked up at me and smiled. The adoption agreement, at least for the time being, was tabled. Elaine had to know that in taking her son into her arms she made parting with him immensely more difficult. If she did not, her mother did.

I was relieved. I did not have any idea of how we might work things out. I had not given it any thought. But now we had a little time, and we could try to make the most of it. It was our decision, made in the moment of our reunion. We never discussed that day and those first few minutes together ever again.

Elaine agreed to have our son baptized and arrangements were made at the local Norfolk Catholic Church to hold the service on the Sunday one week and a day away.*

The priest who instructed Elaine while she was in Norfolk presided over the Baptism. My parents filled in as godparents. My father held James as the priest poured water over the infant boy’s forehead. I was pleased when I saw my father smile down at my son when he let out a cry.

“He has my initials,” Dad proclaimed proudly. That was by design. Elaine’s father was much older than my dad so we chose his name as our son’s first name, James. My father’s second name, Matthew, was given to James as his second, and thus the initials J. M., although family records show my father’s middle name in the more German version “Matthias.”

Intimate Family Moments Out of Context 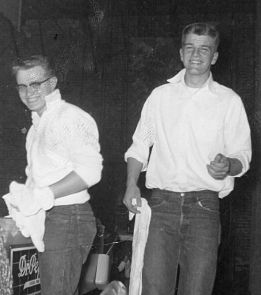 My pal Larry “Ozzie” Osgood (deceased) and I, Spring, 1956. Note the James Dean turned up collars and beltless Levi’s.

It is amazing to me now that these intimate family moments took place totally out of traditional context. Grandparents were finding their role and apparently enjoying it. Elaine and I still had no idea whether we would be permitted to marry right away. If we were to get married, I had no notion whatsoever as to how I was going to provide for her and our son. I assumed nothing. My father had always been generous with me, to a point where I felt that I could talk him into giving me anything that I wanted from a Benjamin Air Rifle to a Whizzer Motor Bike. But I never presumed for a moment that he would support my young wife, our child and me. One mission had been accomplished, however. Our son had been baptized. His soul could now enter the Gates of Heaven.

“Of course,” Monsignor admonished in parting, “he could never hold the position of bishop in the Catholic Church.” It would be years before preposterousness of his statement hit me given the history of corrupt, often perverted,  clergy throughout the ages, including bishops, cardinals and a  pope or two thrown in for good measure.

Control of the situation rested as it often does with whoever controlled the money. Elaine’s parents were poor. My parents were comfortable, although not so well-off as I imagined at the time—a truth that came to light only years later as my brother, sister and I settled my parent’s estate. Any obligations that my father assumed on my behalf represented a burden, if not a hardship for him. I never knew. He never complained.

It has taken years for me to appreciate what our parents tried to do for us. They wanted to give us a chance to find out whether our love would survive the birth of our son and our own immaturity, in which case we could marry in time and start our family with James as our first born. At the same time, they did not want us to feel coerced into marriage. Elaine could have kept our child, taken him home and raised him as a single mother until our feelings for one another became better grounded and defined. But that option was ruled out because both sets of parents thought that the presence of the child in her home would create pressure on both of us. More to the point, the birth of the child was still a secret. Nobody back in Yankton knew about it. Reputations were still intact. The concern over public reaction to the birth of our son exerted too much influence over the planning that took place. I fault the social values of the time.

Our parents decided that James would be placed in a home, perhaps an orphanage, for two years, which was the period of time the two of us were to wait before we married. We would visit the child periodically so that we were not completely disconnected from him.

The Need to Bond

“All babies want is to be dry and fed,” my father insisted. “They don’t even know who is caring for them.” What he and everyone else overlooked in their ignorance was the need for the mother and her son to bond. Their solution proposed was well-intentioned but impossible. The consequences of these decisions would tumble down through at least two more generations, a perspective only history enables, and all influenced by a fear of what others would think.

Perhaps it was cruel and swift justice, but someone from Yankton had been in Norfolk just days before our son was born and had seen Elaine great with child. When I returned to high school class the Monday after he was born, I was shunned by my classmates. I finally asked a locker pal, “What’s going on anyway?”

“Not something I’d want people saying about me,” he replied.

“About what? What’s being said?”

*Author’s Note: The sequence of events—the birth of our son, his Baptism, and my returning to school—is correct. At the time of this writing, however, I have not be able to verify the date of the Baptism nor the date of the 1957 Spring Junior-Senior Prom at Yankton High School, the latter being important to the next post.