Another Christmas season is history. When I was a boy, it felt as though the high point in the year was over and the long uneventful winter stretched out as far ahead as I cared to imagine. I longed for summer when the festivities of the holidays were a distant memory, and I would no longer think of them.

Our family was Catholic. We usually kept the Christmas tree up until Epiphany, January 6, the date commemorating the presentation of the Child Jesus in the Temple, or according to others, the visitation of the Magi. Winter had settled in very well by January in Yankton, South Dakota, and it was cold outside, usually several degrees below freezing at the warmest hour of the day. Our home had a hot water heating system. With a radiator in every room, the air became very dry and the tree, after being up for three weeks or longer, was almost tinder and a fire hazard. Needles dropped by the handful every day and the time had come to remove it.

The task of taking down the tree fell to my mother. With the house quiet once again as my brother, my sister and I were back in school, she removed the tinsel, the ornaments and the lights and stored them all carefully away. The house looked bare and empty when we returned from school. The tree that had dominated the living room was gone. As young as I was, I realized that it would be a long time before anything special happened again in our home.

My Boyhood Home in a South Dakota Winter, 1948

In honor of the passing of the season, I would gather mementoes that were reminiscent of the holidays for me. My collection would include a small sprig or two from the tree itself, bits of wrapping paper from the presents that once sat under it, ribbon, a card from a relative, a candy wrapper, and so forth—just enough for me to carry in both hands to a secret place out of doors behind the garage at the back of the house. There, I would place all the scraps of my collection into a tiny pyre and set it ablaze. I grieved as the fire turned each piece into ash. It was my way of bidding the season goodbye. A fondness for ritual must have been embedded in my DNA.

There was a large apartment complex across the alley from our home. Most occupants also decorated for the season, and after the first of the year, their trees were hauled out and placed near a 55-gallon drum in the alley that was used as an incinerator for the complex, open burning within the city limits being of no concern to anyone in the mid-twentieth century. We kept our eye out for any freshly discarded trees and raced to see them flare up and crackle when stuffed into the barrel and set ablaze by the building janitor.

The burning barrel was a frequent meeting place for the neighborhood kids. We hurled snowballs at it as hard as we could so that they would stick to its metal side and melt and steam away. One day, I acted as if I was going to piss on the side of the hot barrel. “Call the fire engine,” I shouted as I reached for the zipper on my jeans. My sister was standing among those I was trying to amuse. I should have known better. She told my dad, of course, and he scolded me for my immodest and unmanly behavior. I thought he misunderstood. “But, Dad, I didn’t even do anything,” I insisted.

“It doesn’t matter,” he shouted. “Your sister saw you!” I guess just acting as if I had a penis was somehow a sinful thing to do. 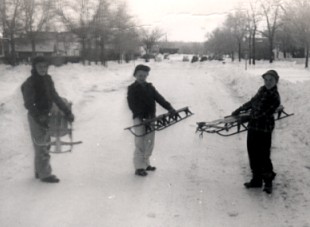 On the other side of town from our home, more than a half a mile away, the police cordoned off three city blocks so that the street could be used for sledding. It was a long, eight-block walk to Sixth Street Hill from our home, but we would bundle up and set off, our sleds in tow. Most of the kids in town would be there, taking a running jump onto their sleds and racing down the steep snow-packed street for the length of an entire block and then coasting another block or two beyond. Often, we would race to see who could go the farthest. Gearing up for the competition, we would take steel wool to the runners of our sleds to remove the rust and corrosion so that they would gleam in the sunlight.

When we tired of racing, several of us made someone “it” for bulldogging. Bulldogging required that the “it” person get off to a running start down the hill and everyone would follow in hopes of overtaking the lead sled. Once on the hill, of course, everyone was fair game. As faster sleds, usually manned be older, heavier kids, were the last to take off so that they could overtake others in front of them. Coming up from behind, they would reach out, grab the rear brace to the runner of an overtaken sled, and give it a yank, turning the sled sideways and dumping its rider out onto the snow. Anyone reaching the bottom of the hill intact celebrated the feat with a derisive cheer back up the slope.

We lost track of time in these games, of course, and forgot about the long walk home. Tired, cold, snow in our overshoes, toes nearly frozen, the hems of our blue jeans rimmed with ice, mittens wet and dangling beneath our red chapped wrists, we began the long walk back. “We gotta leave earlier, next time,” someone would say–a fact painfully obvious to everyone. The house felt warm and welcoming.

“Don’t track in snow,” mother would yell, and we would begin removing our overshoes by brushing one foot across the top of the other in hopes that the buckles would catch and pop open so that we would not need to pry them with our cold bare fingers. Mittens went on top of the radiator in the kitchen to dry out. “Upstairs now,” mother ordered, and we tracked up to our bedrooms to put on warm, dry clothes, recounting for one another as we did our triumphs and spills of the day, only to retell them again to dad went he returned home for the supper hour.

“Yeah, well, that’s great, but how many times do I need to tell you to put your sleds in the garage and stand them up against the wall?” He was too late. We were already in for the day in dry clothes, and the sleds would just have to stay were they were until morning.